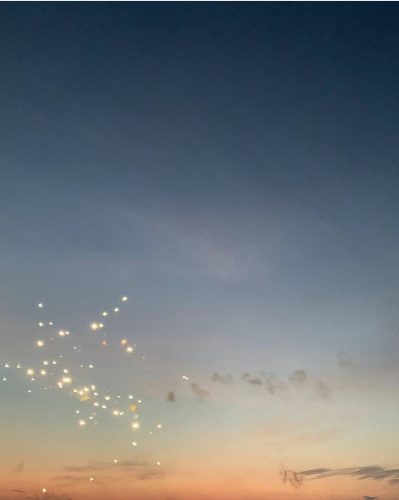 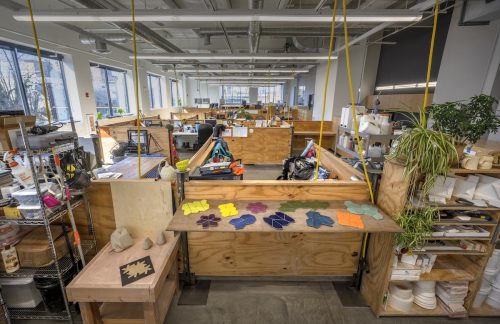 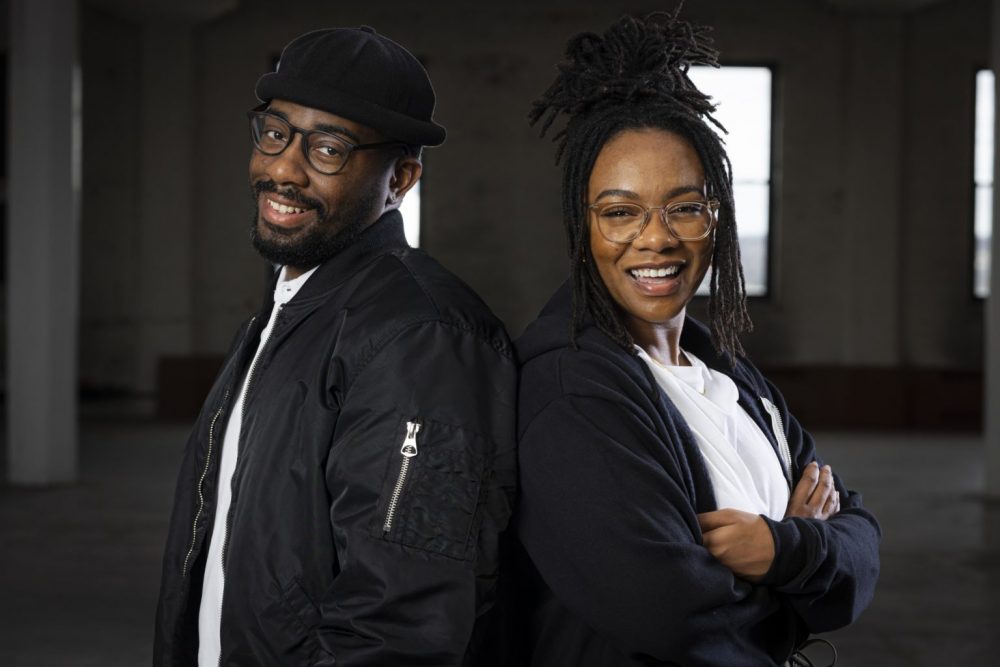 The Marble Bar, a Haven for Punks and Misfits, Closed Its Doors for Good 35 Years Ago
by Hope C. Tarr and Kendell Shaffer
Published April 20 in Baltimore Magazine

Excerpt: Talk to any Baltimorean who was a punk in the late ’70s and ’80s, and they will wax rhapsodic about the Marble Bar. It was the coolest place, with the coolest bands, and the coolest vibe—like nothing that came before it or since. Either you were lucky enough to have been there in person, or you missed out—your loss.

“It was a refuge for a lot of people, and nobody judged you,” explains David Wilcox, a musician and artist who created many of the bar’s iconic flyers with his brother, George. “You knew you were hiding in a safe place to be who you were. If you had a two-foot-high mohawk, nobody was going to bother you [there], but you walked out onto Eutaw or Howard Street and somebody might hit you in the head with a rock.”

You must remember, in the 1970s, disco was king. Top-40 cover bands and DJs kept bars full and crowds dancing. As a result, alternative bands, especially punk and New Wave acts like The Slickee Boys, Thee Katatonix, Root Boy Slim, Suicide Commandos—and even Talking Heads—struggled to find a place to play. But one Baltimore club in the basement of the historic Congress Hotel at 306 W. Franklin Street emerged to fill the void. And that was the Marble Bar.

Excerpt: Another door has been opened for Black creatives in Baltimore.

This final leg of the competition featured eight finalists that stood out in an initial pitch competition that included 43 ventures founded by MICA alumni and current students. What Blvck Door’s founders think put them over the edge was the impact their product could have on MICA students now.

“Of these ideas, maybe they’re not making Teslas, but they are trying to solve a problem through technological means — the mix of technological means and a human-centered approach,” Alexander told Technical.ly. “That’s pretty much what took us there, because we’ve been asking ourselves [what set us apart] since we’ve won. The competition, they really brought their A game.”

In Baltimore’s Backlogged Courts, Defendants Pay for Their Own Home Detention or Risk Years in Jail Pretrail
by Jaisal Noor
Published April 15 in The Real News

Excerpt: Baltimore resident Yolanda (whose name has been changed to protect anonymity) was charged with attempted murder in November 2020 and was denied bail. That means she spent months in pretrial detention at the notoriously corrupt and dangerous Baltimore City Detention Center (BCDC) for a crime she had not yet gone to trial over or been found guilty of—and that she says she did not commit.

Yolanda complained of deplorable medical care behind bars and borrowed money from family members to hire a lawyer to help secure her release, which for her could have meant the difference between life and death. Just months before her arrest, doctors told her she was suffering from heart failure and required a second open heart surgery. Her preexisting conditions put her at high risk of severe illness from COVID-19—and jails are an inevitable superspreader of the coronavirus.

“I not only suffered from heart failure, I had other medical issues like asthma attacks, but nurses refused to treat me,” Yolanda told Battleground Baltimore. “I was really afraid I would die in there.”

Excerpt: Matthew Christopher graduated from Temple University with a film and media arts degree in 2001, in the middle of the dot-com bust. The job market was brutal. As he went around to various employment fairs, companies and organizations “snickered,” as he puts it, at his arts degree. The one place that did offer paid work was a private residential psychiatric facility—after he told them that he was willing to pull the overnight shift.

“So that’s why I was working there and eventually, I thought, ‘I have to learn more about this,’” Christopher recalls. “I got curious about the history of the psychiatric institutions, which I think is one of the more compelling aspects of American history.”

It’s a story that begins with lofty ideals and beautiful, state-of-the-art buildings first constructed in the 19th century that were emblematic of the country’s commitment to care for those unable to care for themselves—and then were left underfunded and understaffed over time, to sometimes awful consequences. The advent of effective psychiatric drugs, community-based treatment, and massive federal budget cuts in the 1980s led to the shuttering of such state facilities everywhere.

Excerpt: Unlike four years ago when Marilyn Mosby cruised to victory, this year’s race for Baltimore state’s attorney could be tightening into a competitive match.

All three candidates in the 2018 Democratic primary are back again – incumbent Mosby and challengers Ivan Bates, a local defense attorney, and Thiru Vignarajah, a former city, state and federal prosecutor.

But at least at this early stage, Mosby appears to have lost votes, while Vignarajah, who ran for mayor in 2020 and is a fixture on Fox45 and other news programs, has apparently gained followers.

According to a poll by GQR, a respected Washington polling firm, Vignarajah and Mosby are now in a statistical dead heat at 32% and 35% of the primary vote.

Maybe they’ll exaggerate about their education or military service. Maybe they’ll overstate the role they played in a consequential legislative debate. Maybe they’ll pretend they know more about a political subdivision than they actually do.

So when CNN released an investigation Wednesday night which suggested that not all of Democratic gubernatorial candidate Wes Moore’s claims of having come of age in Baltimore City checked out, was it really such a big deal?

Very possibly — especially for a candidate whose personal brand is so entwined with his life story. So the question becomes whether the report could slow Moore’s momentum in the nine-candidate Democratic primary — or hurt the best-selling author and former nonprofit CEO if he winds up as the Democratic nominee.

Excerpt: The Baltimore Office of Promotion and the Arts on Monday announced three finalists for the 2022 Janet & Walter Sondheim Art Prize.

This year’s competition will award a $30,000 fellowship to the winner and two residencies to finalists not selected for the prize: a six-week residency at Civitella Ranieri in Italy and a six-month residency at the Bromo Seltzer Arts Tower in Baltimore.

The three finalists – Maren Henson, Megan Koeppel, and James Williams II – will have their work on display in an exhibition at the Walters Art Museum from July 21 through September 18.

Excerpt: When Brian Frosh was sworn in as Maryland attorney general in 2015, the Democrat probably did not expect to spend his tenure fighting the host of The Apprentice. But starting in 2017, Frosh and a slew of other Democratic attorneys general took Donald Trump’s administration to court on everything from the Muslim travel ban to rolling back environmental regulations.

Frosh has declined to run for a third term this year, and Democratic candidates in this very blue state are eager to succeed him. One of them is Katie Curran O’Malley, who has had a front-row view of Maryland politics. Her father, J. Joseph Curran Jr., served as Maryland’s lieutenant governor and as the state’s longest-serving attorney general. Her husband, Martin O’Malley, served as governor from 2007 to 2015.

To become AG, O’Malley, who worked as a district judge for 20 years, will have to beat Anthony Brown, who was her husband’s lieutenant governor before being elected to Congress in 2016, in the June 22 primary. If she wins, she’ll join a bipartisan group of attorneys general taking on corporate power.

Last month, O’Malley unveiled her economic justice policy agenda. I spoke with her on April 7 about using the attorney general’s office to take on corporate concentration.

Excerpt: Newly married and looking for a house to grow into, Baltimore resident Jackson Houbolt and his wife began house hunting after their wedding last fall. Their excitement quickly gave way to frustration.

Their hearts were set on Howard County, but it has the highest median home price in the metro area, and the Houbolts found their bids crushed by competitors’. The first house they wanted sold for $100,000 over the asking price, well above their offer.

On another offer, they bid $75,000 over asking. But even that wasn’t enough. The seller didn’t consider it a serious offer, according to their real estate agent.

“We were pretty surprised overall at how difficult it was to have an offer accepted,” said Houbolt. “It was like, what do we have to do to get a house?”

Excerpt: When he took a construction job at the massive Port Covington development project rising on Baltimore’s Middle Branch waterfront, José thought it would be legitimate employment.

Instead, he and other workers found themselves being paid with company checks – which bounced in one case – rather than payroll checks with tax withholdings and deductions for retirement, workers comp, etc.

For several weeks earlier this year, José says he worked overtime at his metal stud exterior framing job, but did not receive time-and-a-half overtime – just his $840 weekly pay.

“It’s not correct, what they are doing. They are abusing the workers,” said José, who spoke through a translator and did not want to give his real name for fear of losing his job.