Not to Eat But to Think: The 2022 Whitney Biennial 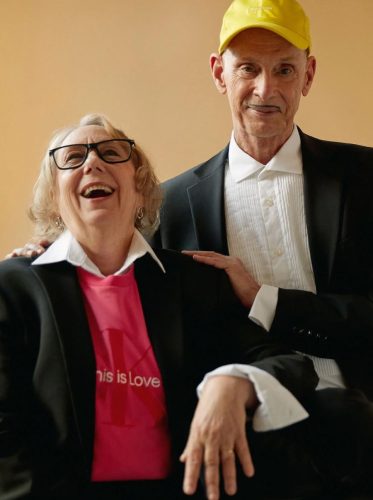 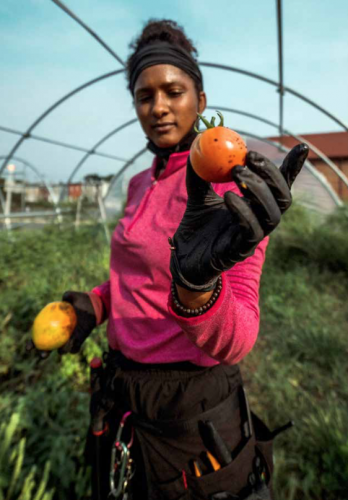 Dreaming of a Place: Strength to Love II Farm 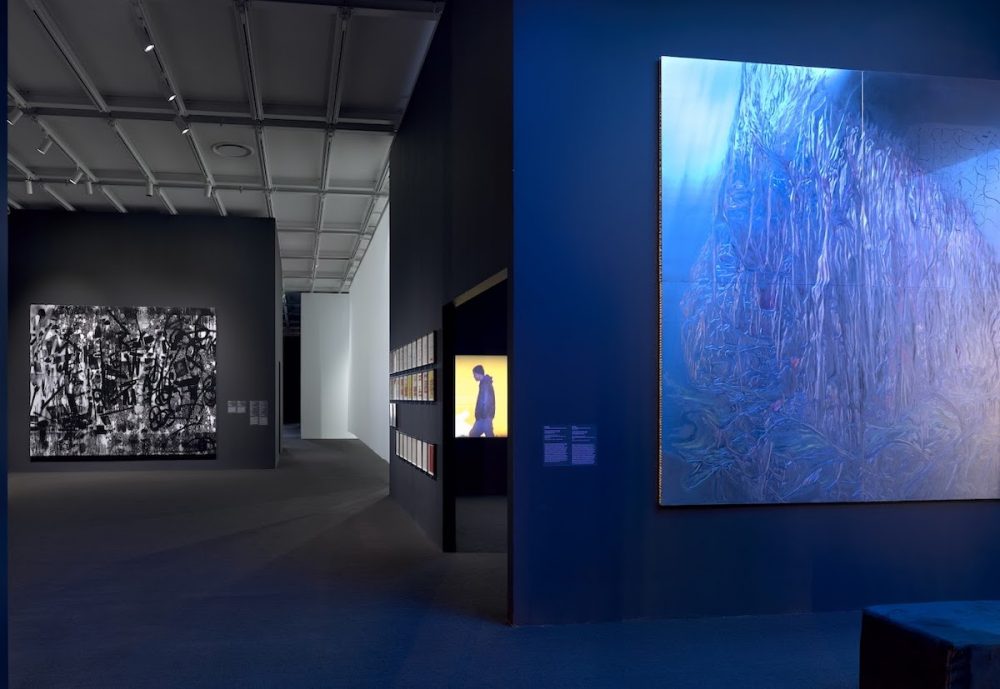 Wondering if it’s worth making the trip to New York City for this year’s Whitney Biennial? Admittedly, the initial wave of critical hot takes was slightly confusing. Where Ben Davis sensed a “quiet weirdness,” Peter Schjeldahl found the show “startlingly coherent and bold.” Where Peter Brock noted that video abounds, Jerry Saltz was struck by the abundance of abstract painting. And yet, almost every published reaction has been largely admiring: a cumulative homage to a show that employs an ambitious curatorial logic in giving meaningful shape to a motley assembly of works.

Curated by David Breslin and Adrienne Edwards, this show took shape in a period marked by a relentless virus, upsetting political news, horrifying police brutality, and a grinding land war. The show confronts those realities directly; as the curators put it in their clear-sighted opening statement, “We organized this Biennial to reflect these precarious and improvised times.” But reflection here is no passive process. Instead, the show conveys a deep unease with existing systems, ideologies, and notions of nationhood, even as it also offers occasional moments of grace and gratitude.

Indeed, the show’s very title—Quiet as It’s Kept, a phrase implying the collective repression of traumatic pasts—hints at ominous undercurrents. So, too, does the dim, claustrophobic quality of the museum’s sixth floor, where visitors are greeted by two massive paintings by Denyse Thomasos, whose dense thickets of lines evoke Piranesi-like dungeons and the dank holds of slave ships. But the fifth floor offers, by contrast, a lighter and airier environment. The open floor plan and variously angled divides suggest the provisional arrangement and excitement of a science fair. And then, too, there are pieces on exterior balconies, in the museum stairwells and lobby, and even in a third-floor conference room. While they acknowledge weighty realities, the curators also work to position artistic creativity as irrepressible, promiscuously transgressive, and even transcendent.

The sheer scale of the Biennial (which includes work by 63 artists, including 16 born outside the US) is bound to thwart any attempt at a comprehensive summary. A look at four of the most memorable works, though, might offer a sense of some of the show’s tone and some of its central tendencies:

Years from now, I’m pretty sure that I’ll still recall the awkward combination of oppression and inventiveness displayed in Dave McKenzie’s haunting two-channel video “Listed Under Accessories.” Over the course of 34 minutes, McKenzie (whose 2021 solo show at the Whitney was also curated by Edwards) carefully handles a sheet of Plexiglas, explores various ways of relating to an Ikea chair, and inserts himself into a large rubber sac, rocking and writhing on his studio floor.

The central principle of earnest physical experimentation with mundane found objects is an old one, and recalls works by Bruce Nauman, Chris Burden, and Erwin Wurm. But the sight of McKenzie’s Black body thrashing and partially emerging from the inert bag is newly relevant and deeply unsettling: can he breathe? And the ways in which McKenzie constantly adjusts and readjusts his body in order to accommodate the awkward sheet of glass suggest an internalized response to much larger disciplinary systems of control. The result is a piece that manages to balance a sense of cautious potentiality with a melancholy accounting of the costs of the aggressive policing of the Black body in contemporary America.

Not far away, Coco Fusco’s 12-minute video “Your Eyes Will Be an Empty Word” offers a lush vision of open space: silky drone shots show the artist rowing across azure water on a gorgeous day. But the sunlight is tempered by our realization that Fusco is approaching Hart Island, which has been used by New York City as a mass grave since 1869, and where unidentified victims of the current pandemic are now buried.

Nominally, Fusco’s piece is a tribute to those nameless dead: at one point, we see her cast flowers into the sea in an attempt to honor their memory. An accompanying meditation, read by the poet Pamela Sneed, gives the work further dimensionality, ruminating on the various implications of touch and breath in the context of a pandemic. Arguably, the strength of the piece rests in its tacit recognition that since 2020 both air and distance have been at once salvific and terribly costly: keys to our protection but also vectors for disease and psychological isolation. But Fusco also captures, in an impressively understated fashion, the bizarre juxtaposition of vast grief and occasional wondrous relief—somehow, we are still alive!—that has characterized life over the past two years.

At least, that is, for some of us. Fusco’s celebration of motion and space and the evident joy that she takes in solitary motion are curtly recontextualized by Emily Barker’s “Kitchen,” a plaintive reminder of the indignities consistently facing people with disabilities. To be sure, the basic elements of Barker’s kitchen (countertops, cabinets, island) are conventional. But their enlarged scale—the countertops stand 5’9” above the gallery floor—dwarfs us, offering a surreal but sobering testimony to the ways in which even quotidian designed environments can alienate and frustrate anyone in a wheelchair.

I go to Burger King every day, not to eat but to think.

Barker’s piece gains a further force in its use of translucent plastic, which grants it a sort of spectral quality. And it benefits from the ghostly footprint of Liza Lou’s beaded “Kitchen” (1991-6), which was recently shown at the Whitney as part of Making Knowing—and which is widely seen as arguing for the dignity of domestic (and presumably female) labor. Barker’s piece calls attention, by contrast, to indignity: a sensation made manifest in a nearby stack of more than 7,000 sheets of paper comprising six months’ of medical records and bills related to Barker’s hospitalization following a spinal cord injury. The tidy stack of paper is a wasteful index that speaks damningly of the numbing bureaucracy and curt inhumanity of our healthcare system.

But can rigid administrative logic perhaps be deconstructed, or reimagined? Rayyane Tabet’s clever “100 Civics Questions,” an installation scattered throughout the Whitney, suggests that it can be. Born in Beirut and currently an applicant for US citizenship, Tabet was struck by the phrasings of some of the questions in the official study guide for the US naturalization test. Some of them read, the artist realized, almost like concrete poetry, while others contained an unintentionally open-ended aspect. Encountered in a stairwell, the question What did the Emancipation Proclamation do? seems both rudely confrontational and wildly unanswerable.

The sudden abruptness of the questions works as a sort of parody of the test—which relies on the fiction that there is a pat, correct answer to each question. But Tabet’s piece also offers a potent lens through which to consider the unfolding present. In the wake of the leaked Supreme Court decision regarding abortion rights, the question What stops one branch of government from becoming too powerful? acquires a poignant aspect. And, finally, the way in which the questions pop up throughout the Whitney conveys a provocative indifference to standard geographies. If boundaries are merely conventional, and seemingly fundamental questions about national identity turn out to be gnomic, what might it actually mean to be American?

Boiling a show of this scale down to four works is a necessarily reductive exercise, and it ignores many other works of merit. I’m thinking, for instance, of Danielle Dean’s watercolors featuring landscapes extrapolated from old Ford ads, with the cars excised and occasional references to Amazon inserted: the resulting scenes are a beguiling mashup of Thomas Hart Benton, extraction capitalism, and commercial imagery. Jane Dickson’s patient paintings of signage from Times Square in a seedier, 1980s incarnation are well worth a look in their rewarding blend of text, image, and memory. And Rose Salane’s exhibit of hundreds of objects used to pay MTA bus fares—from a penny flattened at the Burj Khalifa to casino tokens—is a lively proof of the sheer ingenuity of city-dwellers, and a concrete visualization of an improvised global circulatory system.

This is an emphatically diverse show, with entries that span a wide range of media and tonal registers. But if you’re looking for a sort of thesis or revealing punctum, I’m not sure you can do any better than a remark by the sculptor Charles Ray, in a wall text accompanying his three sculptures. “I go to Burger King every day,” claims Ray, “not to eat but to think.”

It’s a cryptic, willfully contrarian remark. But it’s also a surprisingly crisp summation of the ideas behind this show. In its casual art historical allusiveness (Warhol: “I used to have the same lunch every day”), its cool privileging of the cerebral over the bodily, and its creative repurposing of a bureaucratic structure, it is in tune with many of the other works in the Biennial. And then, finally, there’s the fact that even entering a Burger King was flatly impossible for much of 2020 and 2021. Ray thus summarizes a sort of COVID-induced vertigo that powers this show. Even as it’s unnerving to realize that the mere possibility of sitting in a fast-food restaurant might be a cause for celebration, it’s even more jarring to realize that doing so repeatedly might yield visions of a world preferable to the one that we know.