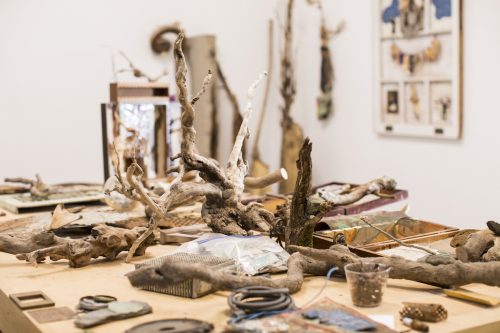 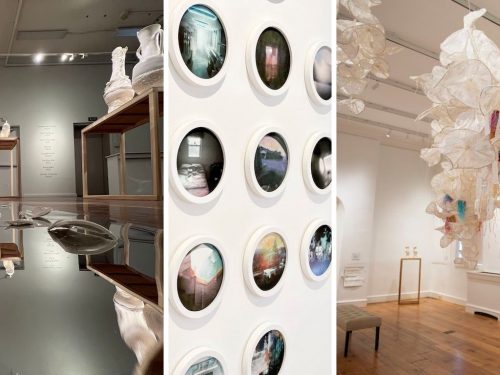 Tactile Journeys: Young Blood at MAP and Spark at [...]

Excerpt: For visual artist SHAN Wallace, Lexington Market is a repository of memories. It is the place where the East Baltimore native would go every day. To get food—corned beef sandwiches for her mother, cookies or candy for herself. To meet up with friends—running around the market as kids, getting into some classic teenager mischief. To run into family members. And, at the end of the day, to catch the bus home.

“Lexington Market was really magical,” says Wallace, 31. “It was a place we’d be able to see our community. It was a place that always felt like home.”

Dating back to 1782, Lexington Market, the country’s oldest continuously operating market, has been a cultural crossroads of all walks of Baltimore, and for many city residents, particularly Black Baltimoreans, this sprawling center of commerce has long been the heart and soul of life here. And it was that vital role that inspired Wallace, between 2015 to 2020, amidst talk of redevelopment of the historic space, to document her Lexington.

The Magic of Matmos: Electronic duo delights with echoes of the future, joys of now
by Ed Schrader
Published August 24 in Baltimore Fishbowl

Excerpt: The experimental electronic band Matmos has made galactic waves in a genre where most artists exist like agoraphobic monks for the pleasure of other cool kids in back rooms. They made their way to Baltimore in the late aughts from San Francisco, where rent seemed to double every time they returned from tour.

Given their collaborative history with some of music’s biggest names, while residing on multiple prestigious labels, you’re taken aback by their “Cheers”-like demeanor as they yuck it up with the crowd, or share a smoke outside the Metro Gallery on this late summer night in August with nerds like myself who’ve had the pleasure of working with them on a handful of tracks and stages.

Back inside, the crowd settles in as they enjoy some much-appreciated A.C. and a good stiff drink, or whatever your pleasure, as member Drew Daniel waxes philosophical on sampling from the The Metro Gallery stage.

Excerpt: Kevin “Mook” Davis, 33 years old, is a hip-hop historian and moderator of Baltimore’s stories. Every Thursday, Mook recounts an in-depth chain of events behind a specific moment in the genre on his Instagram stories while also dropping an episode of his “We Need Answers” podcast. “We Need Answers” is a honest retelling of Baltimore culture. Episodes are often conducted in a conversational interview between Mook and a guest who the episode’s topic is inspired by.

The West Baltimore native became a fan of podcasts while driving an hour to work for the nonprofit organization, Pride Youth Services, in Silver Spring every day in 2018. He cites “How I Built This,” “Drink Champs” and “The Combat Jack Show” as some of the primary inspirations for him to start his own podcast. “I just locked in with it, they started giving me ideas of what I wanted to talk about on mine. Once I get signs of the things that need to happen, I just make sure I do it cause I know it means something since I keep thinking about it,” he said.

John Waters on current film series at The Charles Theatre: ‘My trash epics are still screening in Baltimore’
by Ed Gunts
Published August 22 in Baltimore Fishbowl

Excerpt: The 50th anniversary of “Pink Flamingos” last March prompted cinemas around the country to show John Waters’ films in theaters again – and not just at midnight.

But arguably no theater owner has done more recently to celebrate Waters’ movies with in-person showings than the Charles Theatre in Baltimore.

Last month, the Charles presented six of Waters’ films, including three screenings of “Pink Flamingos,” in a series called “The Filthiest Films Ever Made…and Hairspray!”

Now it’s back with five more, all filmed in Baltimore.

Excerpt: On July 29th, MICA grad and Baltimore artist Katie Pumphrey, 34, swam the English Channel in thirteen hours and 44 minutes. This was Pumphrey’s second time swimming the Channel. And she’s only the 73rd woman to the complete the Triple Crown of Open Water Swimming, which includes the Catalina Channel, the 20 Bridges swim—a 28.8-mile swim around the island of Manhattan—and the English Channel.

Pumphrey talked to us about her rigorous training for “the beast,” jellyfish stings, and waiting for 10 days in England for “the call” to start her swim.

Biden to wipe out $10,000 in student loan debt for many borrowers
by Ariana Figueroa
Published August 24 in Maryland Matters

Excerpt: President Joe Biden announced Wednesday that he will cancel up to $20,000 in federal student loan debt for Pell Grant borrowers and up to $10,000 for all other borrowers with an income of less than $125,000 for an individual and $250,000 for a household.

Despite numerous reports in recent weeks that Biden would take action on student loans, the White House had remained silent, but on Wednesday the president tweeted out his decision, prior to remarks scheduled for Wednesday afternoon.

“In keeping with my campaign promise, my Administration is announcing a plan to give working and middle class families breathing room as they prepare to resume federal student loan payments in January 2023,” Biden wrote on Twitter.

Excerpt: Since 2014, when cannabis possession of 10 grams or less was decriminalized across the state, Baltimore City has become a fascinating experiment in patchwork drug policy. Attempts to make cannabis legal in Maryland have failed for many years, resulting in more stopgap interventions, leading to an especially confusing situation for those who use or sell cannabis.

Having more than 10 grams of cannabis on you technically means you can get arrested for misdemeanor possession (or, depending on the amount, possession with intent to distribute). But starting in 2019, Baltimore City State’s Attorney Marilyn Mosby introduced a policy that her office would not prosecute those arrested for cannabis possession no matter the weight—11 ounces or 11 pounds. Simply put, you could be arrested, but you would likely not be charged.

The far-too-complicated and often contradictory tangle of policies, rulings, and actual laws means, for example, that J, a Baltimore security guard and former cop, has to choose between using cannabis or having the license for the gun he needs for his security gigs.

“I got PTSD. I was a cop for a long time. I got PTSD. That’s one of the symptoms that gets you a medical marijuana card. PTSD,” J told me. “But I can’t get a card from a doctor because then I got to worry that I’ll lose my security job.”

Excerpt: Deputy Mayor Ted Carter has been temporarily suspended from his job following an internal HR investigation, The Brew has learned.

Email correspondence, confirmed by sources, discloses that Carter was suspended from his $210,000 position for 10 days, starting last Wednesday.

The action was taken following an investigation by the Department of Human Resources into staff complaints about his “management style” and allegedly “inappropriate behavior around women,” a source with knowledge of the matter told The Brew.

The investigation allegedly found violations of HR policy that resulted in the suspension.

Excerpt: This story was co-published with The Baltimore Banner and Reno Gazette Journal.

As Nevada lawmakers heard public comment last year on a bill to ban ghost guns and the parts used to make them, a resident of the rural town of Dayton called into the hearing to offer his opinion. The privately made firearms are virtually untraceable because they lack a serial number and can be easily purchased online and assembled by people who otherwise wouldn’t be able to legally buy a gun.

“I do not care if this bill passes or not,” said the man, who identified himself only as Loran Kelley. “I am just informing you that we, as Americans, just will not comply with it no matter what you do.”

Excerpt: Last summer, Nathan Connolly and his wife, Shani Mott, welcomed an appraiser into their house in Baltimore, hoping to take advantage of historically low interest rates and refinance their mortgage.

They believed that their house — improved with a new $5,000 tankless water heater and $35,000 in other renovations — was worth much more than the $450,000 that they paid for it in 2017. Home prices have been on the rise nationwide since the pandemic; in Baltimore, they have gone up 42 percent in the past five years, according to Zillow.com.

But 20/20 Valuations, a Maryland appraisal company, put the home’s value at $472,000, and in turn, loanDepot, a mortgage lender, denied the couple a refinance loan.

Right now is not forever: What my mother’s addiction taught me about hope and grace
by Kondwani Fidel
Published August 18 in Baltimore Banner

Excerpt: My mother told me she was going into a drug treatment program “soon.” Her “soon” could mean a few things: a day from now, months from now — or never. So I always take it with a grain of salt.

I’m lying. I didn’t believe her one bit