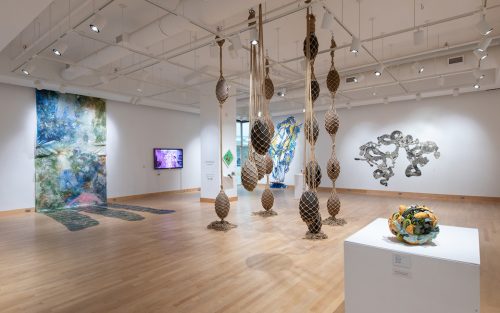 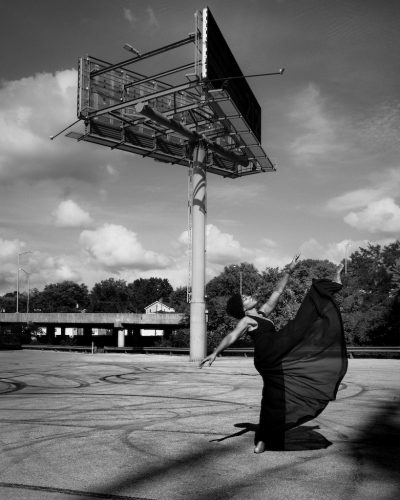 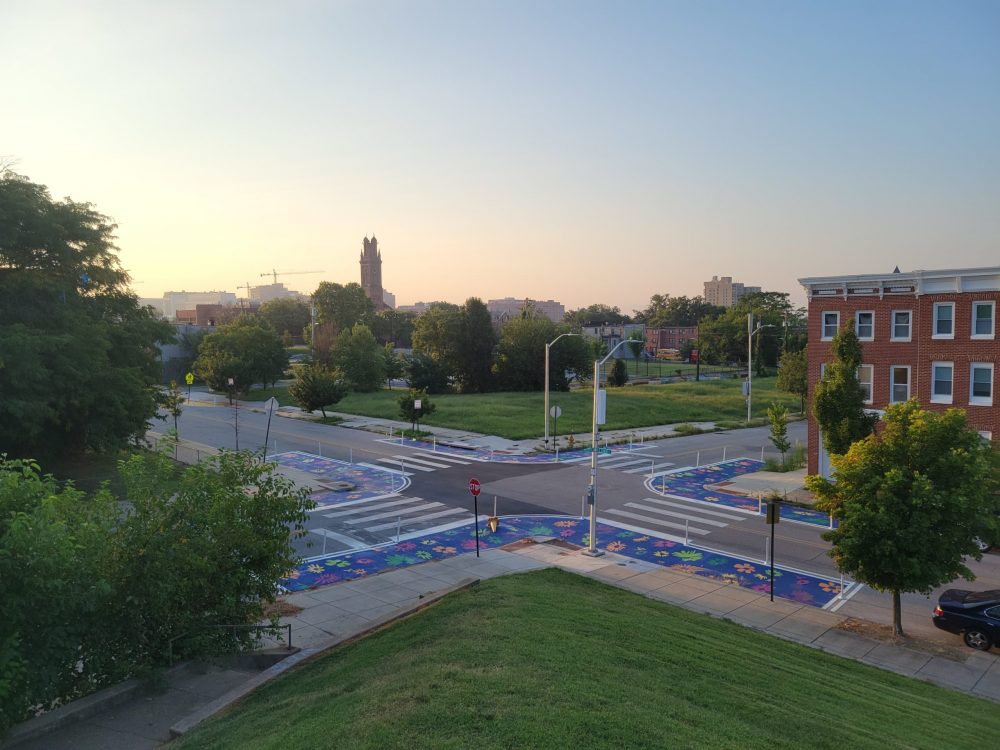 Excerpt: Stephanie Murdock, the president of grassroots nonprofit Skatepark of Baltimore, says she thought by now, skaters from around the city would be coasting across a new skatepark in West Baltimore. Instead, Murdock and about 30 supporters of the planned Easterwood Park skatepark, amid the wind and rain, rallied outside City Hall on Monday, demanding the city build the park as promised.

Backers of the skatepark challenged the city to explain why, after years of work to make the skatepark a reality, the city government suddenly opted in July not to build it, and instead said it would use the money to improve existing features at the park. Some went further and named state Sen. Antonio Hayes as the reason for the impasse.

Excerpt: It started with Linda Taliaferro’s simple desire to have a Black-owned farm where her three children could enjoy a pumpkin patch outing. It turned into the purchase of 68 acres in Baltimore County, a history lesson involving the War of 1812, and the vision of providing a series of experiences revolving around Black foodways.

“Every year we take our kids to the pumpkin farms,” she said. “It exposes our kids and is a fun activity. But we realized there were not any Black-owned farms that we knew of. There wasn’t one focused on Black families and Black communities. None dedicated to the Black culture and history.”

So when the 68 acres in Upperco became available last year, Taliaferro and her husband, Floyd, jumped at the chance to purchase it.

“It spoke to me. It said, ‘this is home. This is where it’s supposed to happen,’” said Floyd Taliaferro, a Morgan State graduate and entrepreneur who owns a health care organization that focuses on behavior and mental health. “We need to settle down, build a farm and feed people. It touched our souls.”

With towing reform shot down by the City Council, high fees and aggressive practices will continue in Baltimore
by Zac Blanchard
Published October 4 in Baltimore Brew

Average those numbers over a month and almost $12,000 was picked up by the towing company – or roughly three times as much as Bank of America, who owned the lot at the time, likely made on parking each month. Note that this estimate excludes the other 137 hours in the week.

Most of the vehicles towed from lots in Federal Hill belong to people who are visiting neighborhood for its restaurant and bar scene.

But Sam Harrington, who lives across the street from the lot, can reel off other examples. Grubhub drivers as well as customers who park for a few minutes to pick up food get towed so frequently that “you honestly stop noticing it.”

Reached tonight, Moore’s campaign spokesman, Brian Adam Jones, did not dispute the accuracy of the bills.

“We’re looking into this and will make sure it’s resolved as soon as possible,” he said.

UPDATE 10 p.m.: Three hours after this report was posted, the campaign announced that “the Moores have paid the current balance out of an abundance of caution while they review the accuracy of the charges.”

Excerpt: Local artists with disabilities will take center stage in a new art exhibition in Baltimore’s Hampden neighborhood expected to open this week. The art work spans from peaceful aquatic scenes to exploring social justice issues. The exhibit, known as Cordially Invited, opens both in-person and online at the Hampden Schwing Art Center on Friday. Make Studio, whose artists are featured in the exhibit, was stood up 12 years ago when its founders noticed a group of local visual artists needed dedicated work spaces.

“My colleagues and I were acquainted with a number of artists with disabilities here in Baltimore who were making a lot of artwork at home after they completed school,” said Jill Scheibler, programming director of Make Studio. “They were really motivated, they identified as artists, and didn’t really have a studio to call their own, to keep creating their work and improving upon that work. And then to receive attention for it, attention that they deserved.”

Excerpt: Bill Pickett, born in 1870 in Travis County, Texas, is perhaps the most famous Black cowboy and was one of the first Black cowhands in rodeo. He was the inventor of “bulldogging.” This technique of rodeo steer wrestling — grabbing a steer by the horns and twisting its neck — became popular, and a central part of rodeos around the country. Pickett’s legacy lives on in the rodeo that carries his name.

On September 14, The Bill Pickett Invitational Rodeo (BPIR) came to Prince George’s County, Maryland. Black cowboys and cowgirls, dressed in their finest, competed for prizes and gathered to maintain, honor, and reclaim Black western culture. Although the rodeo didn’t take place in Baltimore City, it is relevant to this Black Baltimore paper because it was an event by and for Black folks, and Baltimore is a city with a legacy of Black western culture — specifically, Black equestrians.

“We knew it was a real serious problem just waiting to happen,” said Hammond, president and founder of Rebuild Johnston Square, the neighborhood group.

But since volunteers painted brightly colored pavement designs at three key intersections near the school this spring, drivers have been slowing down and yielding to pedestrians more regularly.

Johnston Square’s “Bee Safe Art Crosswalks” project was funded by Bloomberg Philanthropies’ Asphalt Art Initiative and AARP. Rebuild Johnston Square also worked on the project with the Baltimore City Department of Transportation, the Made You Look project from Maryland Institute College of Art’s Center for Social Design, The Neighborhood Center, and ReBUILD Metro.

Excerpt: Holt lay on the wide bed, having taken his shower first. He felt clean, relaxed and expectant with desire, waiting for Debbie to finish and come out of the bathroom. The sheets were smooth and virginally white, but not for long.

If you told 18-year-old Jocelyn Broadwick that 15 years later she would be sitting onstage at the Creative Alliance, wearing vintage lingerie and reading sexy scenes such as this from the 1963 paperback, “Female and Fatal,” she would have laughed at you. Then she would have prayed for you. And for herself for entertaining such an impure thought.

But on Friday evening, the now 33-year-old Waltherson resident will do just that. The words “thrust” and “pulse” and “glisten” will likely emerge from her mouth, multiple times. The audience will laugh and do adult Mad Libs and watch improv based on books with titles such as “The Lusty Librarian,” “This is Temptation,” and “Bookmobile Bad Girl,” (tagline: “She Gave It Away Free All Over Town!”), as part of an event titled An Evening of Vintage Smut.

Excerpt: Just before Labor Day of this year, the Walters Art Museum’s executive director, Julia Marciari-Alexander, sent an email to staff, the public, and the press admonishing the museum’s unionizing workers for not “taking the necessary steps within their control in order to proceed to a union vote.” She reiterated her previous comments that leadership “support[s] our employees’ right to consider unionization” and that the process must be decided through an election conducted by the National Labor Relations Board.

Since publicly announcing their union in April 2021, however, Walters Workers United have clearly stated that they are open to an election if the museum chooses not to voluntarily recognize them. (If voluntarily recognized by management, or formally elected by a majority of voting members, WWU would be affiliated with the American Federation of State, County, and Municipal Employees [AFSCME] Council 67, which also represents newly unionized workers at the Baltimore Museum of Art.) The museum administration has not voluntarily recognized the union, and members of WWU say that Marciari-Alexander has repeatedly refused to meet with them to discuss any alternative potential paths toward recognition.

In effect, each side has accused the other of stalling the process by which workers could hold a formal union election. What, then, is the holdup? The conflict is bound up in particularities of process and deflective rhetoric.

Excerpt: The last time Sterling Thomas saw his teammate Jeremiah Brogden alive was in the hallway at Mergenthaler Vocational High School just before the football team’s first game of the season on September 2.

The two varsity players met briefly, when Thomas was on his way to the multipurpose room at Mergenthaler — or Mervo— for the team meal. Brogden was supposed to be doing the same, but told Thomas, who is the team captain and middle linebacker, he needed to attend to a personal matter in the parking lot behind the school.

Thomas told Jeremiah Brogden to be mindful of the time and not be late to the team meal. “You’ve got to 2:50 to get down this hallway,” Thomas said before the two parted ways.

The Mervo coaches had pizza delivered before the game against Edmondson-Westside High School. It was a pre-game ritual repeated each Friday from September to November at Mervo; the players ate before descending into the locker room to dress for the game. The meal corralled all the players in one place so the coaches could make any last-minute adjustments and keep the players’ attention squarely on football. It worked. Thomas got so wrapped up in the game to come, he didn’t notice his cell phone ringing during the meal.

“I was just eating pizza and thinking about the game,” he said.

On Thursday evening, Hogan convened a meeting of about 50 supporters and donors in an Annapolis hotel ballroom and served them cocktails and hors d’oeuvres, to discuss his prospects and his timetable for making a decision, according to several people who attended or were briefed about the gathering.

The group heard from Thomas Kelso, Hogan’s longtime campaign chair who is Hogan’s appointed chair of the Maryland Stadium Authority; David Weinman, who is running Hogan’s political organization, An America United; and Russ Schriefer, a Republican media consultant who works for Hogan and has experience at the presidential level with the campaigns of President George H.W. Bush, President George W. Bush, and Mitt Romney. The governor also spoke.