Head of Sand: A Studio Visit with Jason Hoylman by Matthew Kern

Sofia Silva’s Meditations on the Landscape [...] 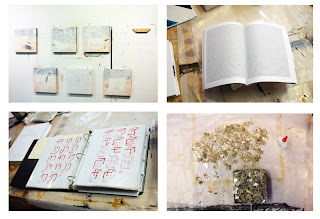 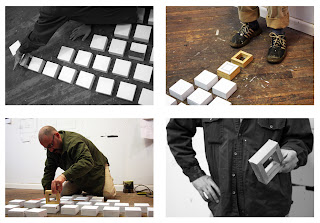 Working out what you want to create, and what you want it to mean, if anything, are two of the many problems that all artists have to wrestle with. (Problems being the operative word.)

When you are able to solve these problems, to any extent, you have developed a process. Every artist has a process, whether they can explain it or not. Enter: Jason Hoylman. He can explain his process with such detail that my head started to pixilate. 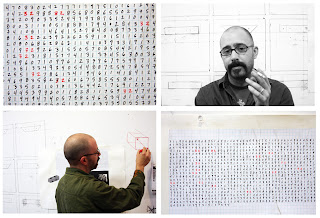 Born in Oklahoma and living in Texas for three years, Jason moved to Baltimore in 1994. After years in and out of school, studying a large array of art mediums, and “generally fucking around” he finally received his undergraduate degree from MICA. Fascinated by math theory, but not good at math, he began formulating ideas for a series of books he calls the Quantum Library, several volumes of books with hundreds of pages of numbers in a grid like format. 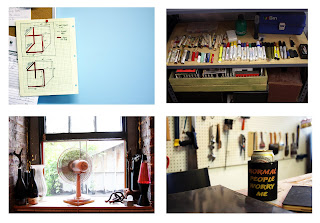 “There is a lot of information to see. Whether the numbers mean something or not, there is a beautiful visual aesthetic that occurs,” Jason explains.”It is a way to physically experience entropy. Let’s say on one of these pages you pull away, visually, the number 2. It is still there working, but the visual absence creates a visual pattern. Constellations in a way. Points of reference.” These books and collages led him to the square root of 2, which is endless, and the Necker Cube. 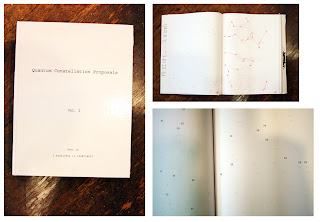 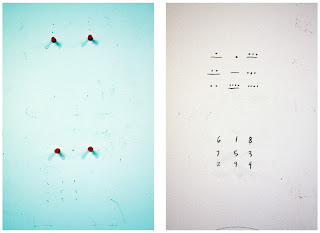 “All of these points lead to a pattern that can be used as reference to painting. They are stable features of change.” His paintings are heavily layered and can take years to “complete”. I quote that word because some of the work has interchangeable, smaller paintings that can be removed and replaced with another, which means they are never really done. A technique he refers to as “the process of nutritional destruction” gives the owner an opportunity to change the paintings at will.

With all of this cerebral activity, I was curious about the process of working on the paintings themselves. While walking to his studio at the 405 Building I asked, “Do you ever, for a lack of a better way of putting it: “Let go”? Like Obi Wan Kanobi telling Luke Skywalker at the end of Star Wars.” He looks at me with a serious stare. “Kind of. Sometimes.”

Along with his own art work Jason is the full time curator at The Windup Space and has been involved in numerous curating endeavors including Die Botshaft 1628 and is currently involved in the upcoming “Motorcycle Show” at Area 405. For more information, go to: Jasonhoylman.blogspot.com.

All writing and photos by Matthew Kern (www.matthewkern.com)
Share