Be Our Guest: Narrative Liminal at Guest Spot Gallery, through October 15 by Cara Ober

Pictures in a Remix Culture, October 6 to Decembe [...]

Be Our Guest: Narrative Liminal at Guest Spot Gallery, through October 15 by Cara Ober 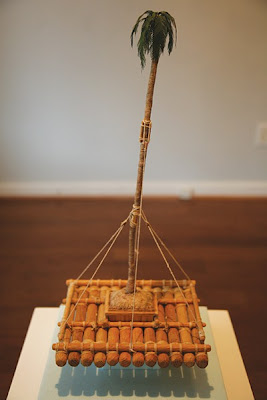 New Urbanite Arts Article. Published in the October, 2011 Urbanite Magazine – Grab it out on newsstands now!

Photo courtesy of Guest Spot Gallery.
Guest Spot functions as a home and an art gallery in Fells Point.

Stepping into Guest Spot Gallery, one gets the sense of being instantly transported to New York’s Lower East Side, where myriad gallery upstarts fill small, wonky living and retail spaces. Nestled into a charming Fells Point rowhouse, Baltimore’s newest destination for contemporary art boasts gleaming wood floors and white walls; if you venture back far enough, you’ll find artwork installed in a modern dining room and kitchen space. Besides being an independently run gallery, Guest Spot is a home and studio space for Rod Malin, an artist and recent transplant from New York. Rather than a distraction, Guest Spot’s concurrent function as a home enhances the boundaries of this exhibit: for the exceptionally curious, a secret diorama is waiting to be found in a kitchen cabinet.

Malin, the gallery director, has only been in Baltimore a few months, but he has wasted no time implementing a Big Apple sophistication and professionalism. So far, the exhibits have included a combination of local and New York artists and tend to favor an intellectual approach to ideas and issues. The most recent exhibit, Narrative Liminal, features Baltimore’s John Bohl and New York’s Michael Peter Smith and explores the idea of gaps in collective consciousness due to modern journalistic practices. Bohl’s prints, collages, and sculptures employ an absurdist method of combining disparate elements. Still Life with Pretzel features neat, geometric abstractions with a trompe l’oeil pretzel floating above, and Iced Block, a sculpture, appears to be a cinder block covered in white, goopy plaster. Smith’s sculptural works are anthropological fantasies in which realistic skulls transform into landscapes and, in Raft, a miniature palm tree grows out of a floating, man-made island. Although their aesthetics are quite different, both artists successfully create alternative realities that question the systems and hierarchies that inform history and folklore.

Guest Spot hosts monthly opening receptions on Friday nights, as well as a closing reception that doubles as a Sunday brunch (the next one is October 15 from 1 to 5 p.m.), and their regular Saturday afternoon gallery hours make for a nice stopping point on a Fells Point stroll. After Narrative Liminal, the next exhibit, Boundary Proof, will feature works by Gina Dawson, Carl Gunhouse, and Cyle Metzger. For more information, go to www.guestspot.org.