Be Our Guest: Narrative Liminal at Guest Spot Gal [...] 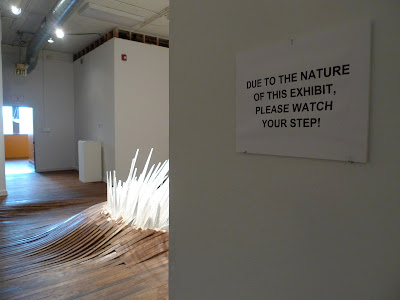 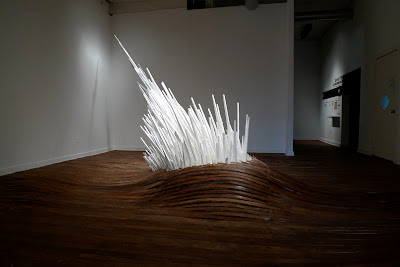 (To see the original version or read other arts coverage, go to the Urbanite Arts and Culture Page here.)

Walking into Points of Contention at School 33 Art Center is like stepping into a mirage. The hardwood floor, normally flat, ripples in tiny waves. In the center, a giant, crystalline structure glows with a chalky whiteness, as it explodes violently up and through the center of the floor. This installation is fascinating, in a “whodunit” kind of a way, because Jonathan Latiano’s construction doesn’t leave any clues as to its creation. Points of Contention appears, seamlessly, to be a part of its environment, as if it really has just burst through the floorboards. 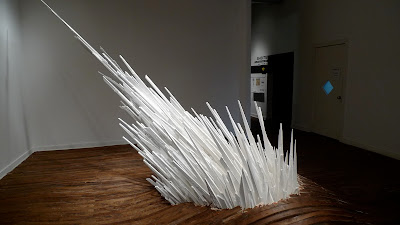 Jonathan Latiano is a young artist (he’s 29) whose inspiration comes not from the world of contemporary art, but from the dioramas of the American Museum of Natural History. Latiano attended Moravian College, where he majored in studio art, with a focus in painting. In 2006 he graduated, after which he moved to New York City to work for four years. He’s now taking graduate courses at Maryland Institute College of Art. 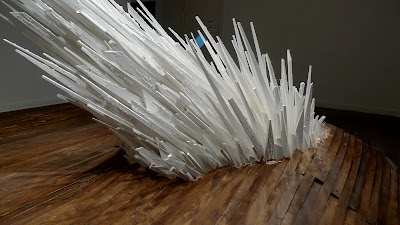 As a non-scientist, Latiano is fascinated with the fragility he finds in nature and creates visual narratives through the lens of biology, astronomy, and man’s love/hate relationship with the natural world. As a sculptor of site-specific works, Latiano is drawn to odd and ephemeral materials like feathers, glass, dust, and eggshells, as well as lustrous resins and finishes. He’s interested in the fine line between natural and artificial, as it enfolds in today’s environment, and he uses contrasting materials to suggest a battle between toxicity and the organic processes that govern nature.

In his newest site-specific installation, Latiano explores the concept of geological movement by enveloping the viewer in a physical spectacle. By painstakingly reconstructing the floor, and encouraging you to walk on it, this immersive environment questions where the art begins and the building ends. And, although it shouldn’t be, the crystalline structure in the center is uncannily lifelike. The large, white explosion of wooden points could have been created by nature, or, possibly, a breakdown in natural forces.

After visiting this exhibit, I sat down with Latiano to find out more about him and to discuss his new work.

URB: What you are studying at MICA? How is it influencing your work?

JL: I am a second year MFA grad student in the Mount Royal School of Interdisciplinary Art. … I guess the obvious influences would be the professors and visiting critics I’ve been working with over the last year, but I’d also have to say that my fellow grad students have been a huge influence on my practice and my art.

URB: Points of Contention looks new and really different from your earlier work. What was the idea behind it? How did you create it? 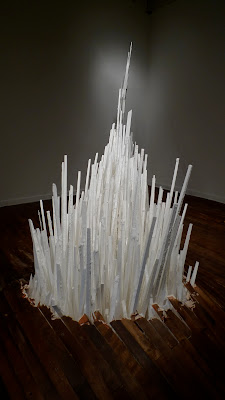 JL: In the last year or so, I’ve become very interested in more formal ideas of where things are physically beginning and ending, what appears static and what kinetic and how converging forms can arise in drastically different scales and speeds. With this installation I was really interested in building something that could be viewed as both ascending and descending, crashing into the ground violently and yet also slowly growing out of it. I have my own narrative behind the piece that sets up a kind of rules or physical laws to the materials and forms that I work with. …

For a long time it was always really important to me to get the ideas of these narratives across, but more and more I find that it’s more interesting to set them up as jumping off points and let the work emerge out of that. A lot of the impressions and feedback that I’ve gotten so far have been along the same lines that I read the piece, about time and geology and pollution, but it’s always really interesting to get things out of left field. You make these things, you release them into the world and you have to know when to step back and let them stand on there own.

URB: For such a unique construction, including the undulating hardwood floor, what materials and tools did you use? How long did it take?

JL: It took me about four months to fabricate the piece and two-and-a-half weeks to install it. 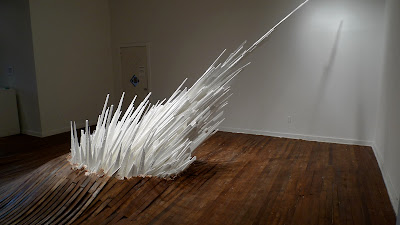 The main structure in the center of the room is comprised almost entirely out of thousands of pieces of found and re-purposed wood, plastic, Styrofoam, and glass; each piece was individually cut, painted, or transformed in some way. The sculpture was then coated in 50 pounds of a rendered down salt solution that I make. As the applied salt evaporates it forms its own patterns within the surface of the piece. 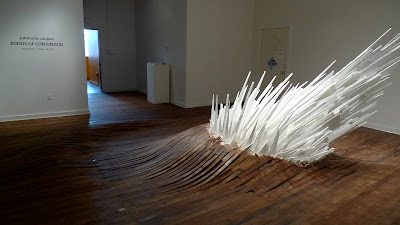 URB: Was the product what you envisioned or did you have to alter it for the space?

JL: The end product, like almost all of my work, evolves out of the process of building it. I tend to do only rudimentary sketches of a piece when conceiving it; I can’t begin to really figure it out until I’m actually well into the construction of it. When I first began building and thinking about the piece, I didn’t know that it would be shown at School 33. It wasn’t too long into it though that I got the show and then things really started to come together.

Points of Contention really is made specifically for the second floor gallery at School 33. I did multiple sight visits and constantly kept photos and layouts of the gallery nearby while fabricating the piece in my studio. The undulating floor was an element that came out of this process.

URB: To me it seems like a violent explosion, as well as an optical illusion—a reminder of what could happen, or has happened in the past—like a natural disaster and the power of nature. There is suspension of disbelief because of the incredible detail in rebuilding the floor.

JL: As far as the craft of floor goes, yes, some of it has to do with a temporary suspension of disbelief, but mostly it’s about committing whole-heartedly to an idea and seeing it through. The concept of the floor arose about halfway into it. When this happened it was one of those great moments when I had figured out a solution to all the problems I was having with the piece, [but] it was immediately followed by one of those moments when I realized I had no idea how to execute this. There was a lot of experimentation, brainstorming sessions with other artists and trial and error and I developed a bunch of new techniques for this floor. 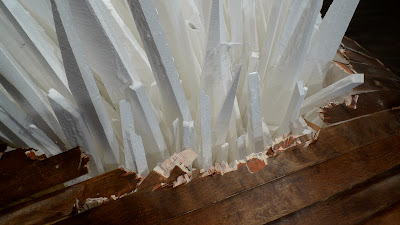 URB: Materials, in their natural states, seem to be central to your work. What are your favorite materials to work with? How do your materials affect the outcome of the piece?

JL: I’m not sure if I have any favorite materials, but there are definitely ones that continue to show up in my work. … [T]here’s a large amount of site-specifically grown salt crystals in this piece. I’ve been working with this element a lot recently. I’d been making pieces that talked about growth and time in my work and I was going through great lengths to simulate it. It occurred to me that it should be bringing in an actual element of geology into my work; even though it’s only by a few centimeters, the sculpture actually is growing while in the gallery. … And that’s how it kinda works with me: Every so often I find a material that solves a metaphorical problem with my work and then I’m hooked on it, exploring all the different implications of it. The same has been true for feathers, eggshells, and dust.