Reflections on Combat: The Work of the Combat Pap [...] 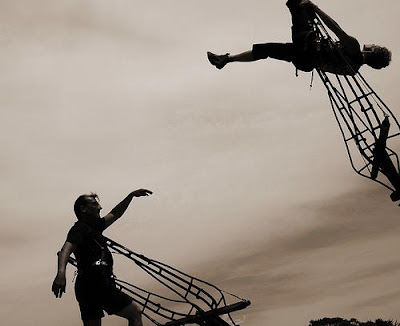 Tim Scofield’s welded steel sculptures tend to look dangerous (which they are, sometimes) and fun (which they are, invariably). The City Paper said his Flying Machine, in which a participant is strapped to one arm of a pendulum and able to carom off walls and ceilings like Spiderman, looks like “a cross between a hyperactive Alexander Calder mobile and a Victorian amusement park ride.” Known for big, dramatic sculptures that are activated through performance, he makes art like the one-time BMX-biker/skater/snowboarder he once was. It’s not all backyard aesthetics and Jackass-inspired antics, however. There’s power and grace to the work, even with his own 200-pound frame strapped in, as much Gene Kelly and Buster Keaton as Johnny Knoxville.

The titles for Scofield’s pieces are descriptive more than poetic, as if he’s content to let the actions speak for themselves. Along with a pair of his Flying Machines and an array of harnesses, miscellany, and documentation of past performances, there are the Teeter Totter, the Tower and the Weeble Wobble. At the opening, and prior to performances of Mara Neimanis’ Naomi’s Flight, Scofield will demonstrate the Weeble Wobble, and possibly others.

Scofield and Neimanis are frequent collaborators and co-founders of the Alley Aerial Arts Festival, which brings together aerial performers from a range of backgrounds: dance, theater, circus and burlesque. They first worked together on the premiere of Neimanis’ Air Heart, a one-woman show about Amelia Earhart performed on a steel sculpture of an airplane, which premiered at CA in 2006.