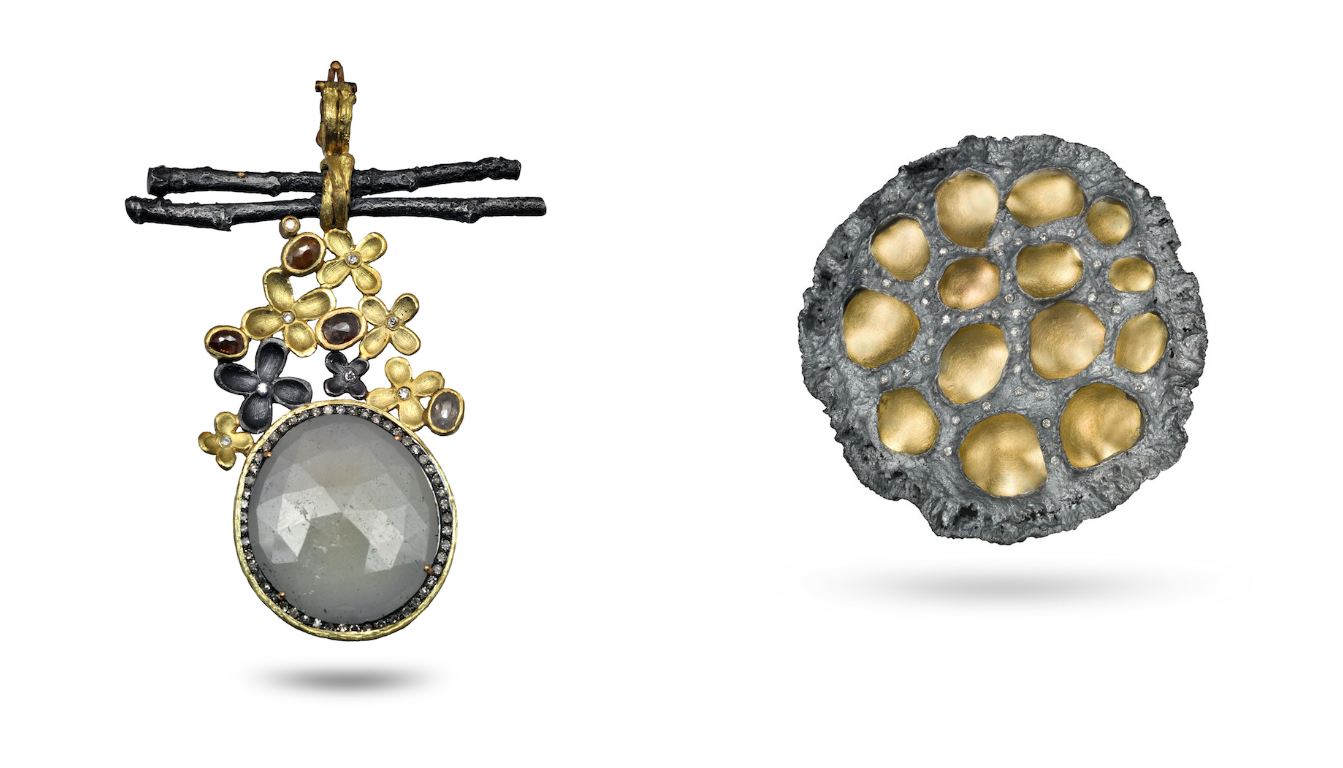 In The Studio: An Interview with Jewelry Designer [...] 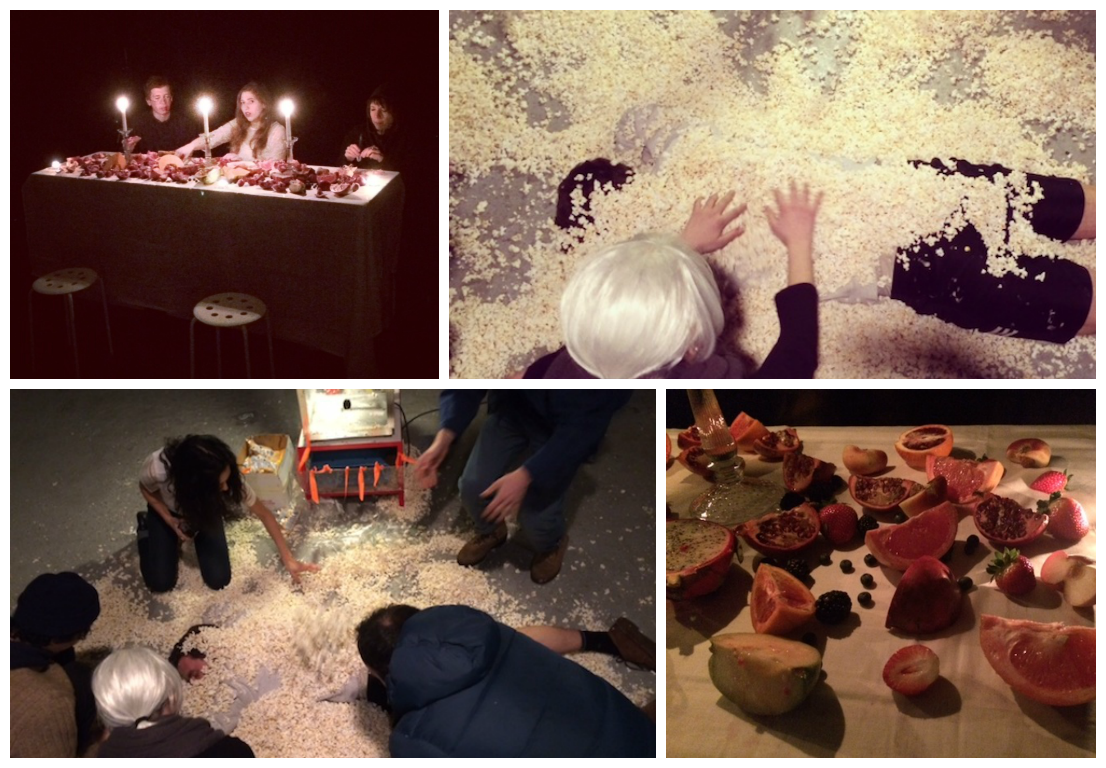 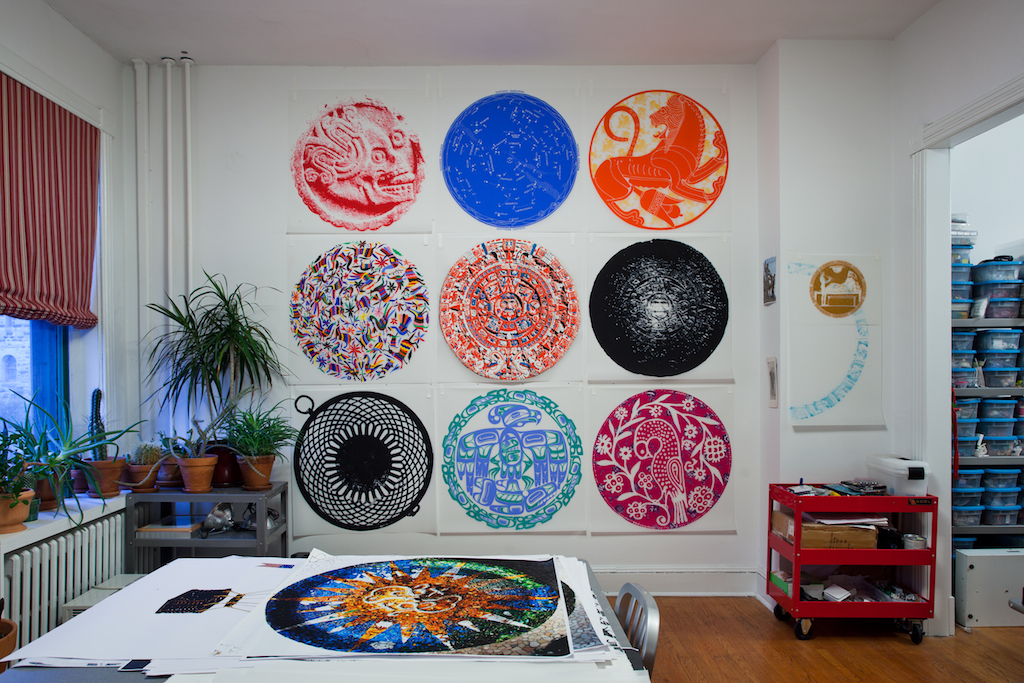 René Treviño pushes the limits of the circle in two solo exhibitions: one at Grimaldis Gallery in Baltimore and the other at Pentimenti Gallery in Philadelphia.

Circular works of art have been created by artists since ancient times, but the composition has been largely abandoned by contemporary artists. Since the invention of illusory space in the Renaissance, visual artists have primarily favored square and rectangular compositions because they reinforce the painting as a window, even when the space represented is theoretical or emotional. Although circular designs are regularly employed in architecture, ceramics, crafts, and stained glass, fine artists who create circular images tend to reference a kitsch aesthetic or a porthole view, and neither approach is taken seriously.

Within this context, it is significant that René Treviño’s fourth solo exhibition at C. Grimaldis Gallery, Axial Precessions, features a series of large, circular forms. In addition to the Aztec Calendar that has become synonymous with Trevino’s practice, his new work includes celestial bodies, cultural and art historical objects, patterns, star charts, and astrological maps. While it is unclear whether Trevino’s choice in subject matter precluded his unusual circular compositions or if the artist intentionally chose the circle for symbolic or compositional reasons, his ability to stick to a consistent line of questioning is impressive.

Installed in a grid that fills a gallery wall from the floor to the ceiling, Treviño’s intricate paintings on mylar create a dazzling field of detail and color. Each individual piece is 36″ x 36″ and there are an overwhelming twenty-one paintings on one wall alone. There are additional works in the gallery including a few smaller circular works, and several non-circular works, too. According to Associate Gallery Director, Jennifer Tam, “Axial Precessions features a body of work that has been years in the making, and it is only by seeing this show in person — the sheer number and variety of works, as well as the level of care and consideration that went into each piece — that one can understand what a massive undertaking this exhibition was for René.”

After viewing his exhibition in person, I interviewed the artist to learn more about his process and practice. Joan Cox: The title of your current exhibit at Grimaldis, Axial Precessions, sounds so alluring. I had to look it up on Wikipedia to learn it’s scientific meaning: “axial precession is a gravity-induced, slow, and continuous change in the orientation of an astronomical body’s rotational axis. In particular, it refers to the gradual shift in the orientation of Earth’s axis of rotation…” The majority of the paintings in this exhibit are circular like moons, mandalas and ancient Aztec suns. How did you choose the title and do all the works in the show have their roots in astronomy?

René Trevino:  The title came late in the game. I wanted it to reference astronomy, with all these round forms rotating in space. It gives all of the disparate forms a context. I love the Carl Sagan quote, “We are all star-stuff.”

JC: I understand you have been working on this body of work for two years or more. When did your interest in the circle first reveal itself?

RT: I realized that I was painting all these circular forms, images from Greek pottery and the Aztec calendar, but within rectangular compositions. I wanted to give them more space and give myself more room to play with color and pattern and texture.

JC: Clearly your work involves research. How do you collect and use information?

RT: I am a visual historian, ravenously seeking out interesting images and ideas to play with. Of course the Internet is a source, but I love libraries and books and magazines too. Popular culture, film and television are also important… I try to leave myself open to everything. I never know when something will strike a chord.

JC: How much do you alter the imagery once you translate it into paint on Mylar? Do you remain completely true to ancient patterns you find or do you insert and rearrange elements?

RT: A million tiny things happen in the transition from source image or idea to a completed work. I’m always editing. I insert pattern, re-arrange shapes, reverse things, adjust contrast, etc. My adjustments range from more to less obvious, depending on the image. One of my key strategies is to complicate history even further, so I like “messing with” the source material as much as I can, even if it is often very subtle.

JC: What kinds of liberties do you take with color? Your combinations are so strikingly beautiful. Do the colors you choose have cultural significance or personal significance?

RT: Thank you. The color has been a big experiment, but one I’ve been having a lot of fun with. Sometimes the image dictates or calls for specific color, but often it’s me just trying out combinations and seeing what works.

JC: Your paintings have a universal appeal due to the symbolic nature of the circle itself and the references to ancient cultures. In what ways are you exploring and revealing your personal identity in the works you choose to make? RT: Universally appealing? I hope so. I am interested in connection points, the intersections of cultures. We are more similar than we are different. At this point I feel excited to draw from a wide range of cultures, it’s the mix and point of view that is specifically mine. That said, personal identity content is important in the work and I feel the most connection (ownership?) with Mexican imagery.

JC: How do the few large pieces in the show that are based on toile patterns fit in with the circular works? Would you like to see those pieces tiled and repeated to filling an entire wall like wallpaper? I definitely would.

RT: I wrestle with that. At this point it is important that the work is hand-painted. That makes full wall installations complicated although I have done much larger installations of pattern. With the toile paintings specifically I was working from tiny fragments of 18th century cloth, so I had to recreate the repeats myself. Since I was working from scans of fabric, the repeats weren’t perfect. In other series I might have tweaked things to make it all seamless, but in this instance the imperfections were interesting to me. When the repeat didn’t match up, I painted it again over or on top of. It creates these abstract rifts in the composition that I love. It’s subtle, but it gives the work a different kind of energy.

JC: Tell me a bit about your process of painting acrylic on frosted Mylar. What are the limitations of these materials? What drew you to this medium?

RT: I love Mylar. I have been working with it for 10 years and love the way my paintbrush glides along the surface. I work flat, with very wet paint. I let things dry for a long time. I can’t think of limitation. At least I haven’t encountered any yet. Like any work on paper, it is somewhat fragile.

JC: Working through a gallery like the C. Grimaldis Gallery, do you consider your collectors and your audience when preparing a new body of work? Does Costas Grimaldis make studio visits and discuss the work in progress or is he more hands off?

RT: No. I can’t consider collectors; I have no idea why anyone buys anything. I’m just thankful when someone does. Why does one sell and another doesn’t? I make the work that is compelling for me to make. It is laborious; it takes a long time and requires a lot of patience. I have to be excited about the project or I won’t go the studio. As far as Costas goes, this is my fourth solo exhibit at the gallery, and we have established a high level of trust. JC: You have another solo exhibit, Centrifuge, in Philadelphia right now at Pentimenti gallery. Is your audience any different in Philly vs. Baltimore? Does showing the work in a different gallery setting in another city alter the way it is perceived in any way?

RT: Pentimenti is a smaller space in terms of square footage, so the work I am exhibiting there is smaller in scale. I was thinking about the same types of things with both exhibits, so I think they compliment each other. Whenever you show in a new place it means presenting you’re your work to a different community who might have less context, but the more folks who get access to the work in real life (as opposed to online), the better.

JC: Do you feel you have exhausted the variety of circular imagery or barely scratched the surface?

RT: I don’t feel as though I have exhausted the variety of circular imagery, I can see myself painting in this format for a while. In fact, I am still working on this series in my studio. I compare working on a series of this scope with writing a very long novel, I just haven’t figured out when, how or if it will end. * Author Joan Cox is a Baltimore-based painter and a graduate of the MFA program at MassArts.

** Photos are courtesy of the artist and Pentimenti Gallery.