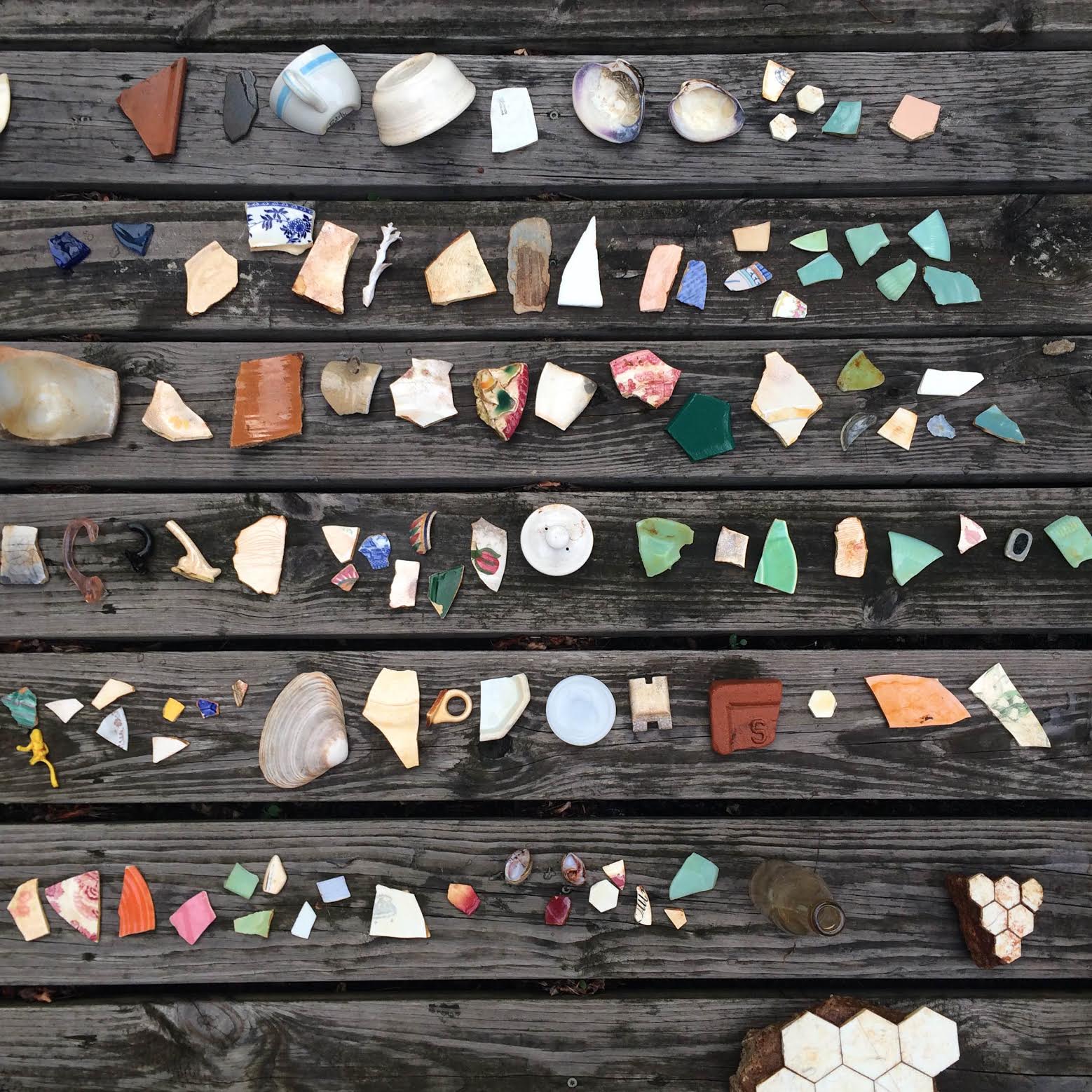 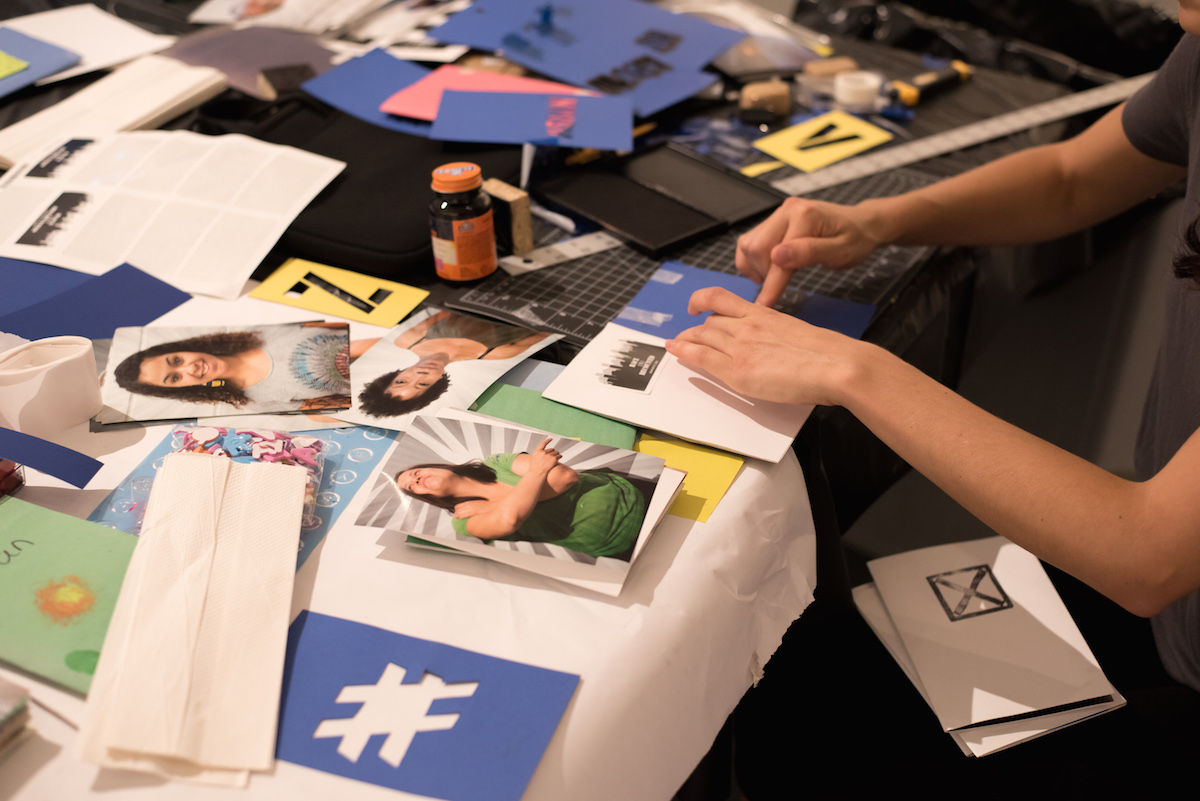 A Library of Voices 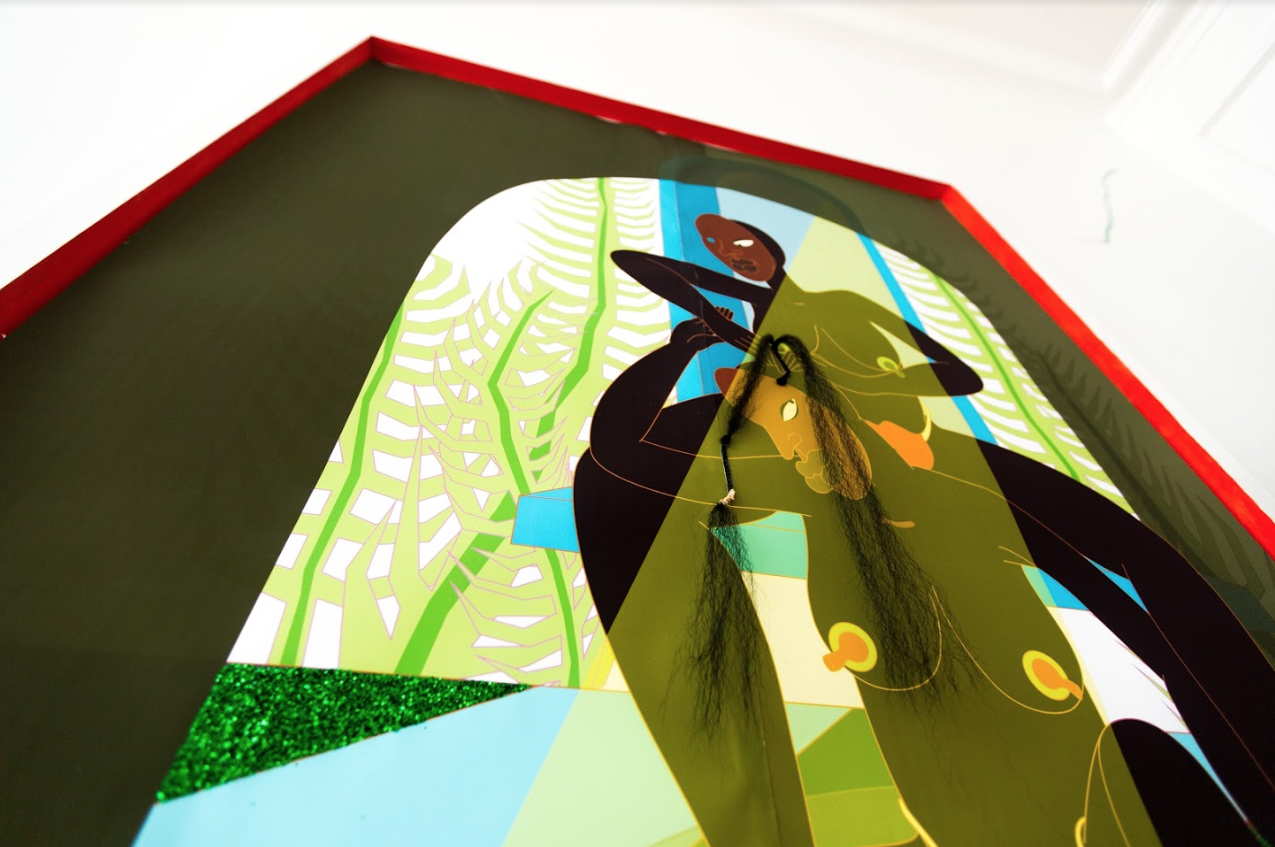 Theresa Chromati: “I want to capture black beauty in its ultimate dimension. I want to give people a view of what I see as beautiful. Various body types and imperfections. There are a lot of people within each of the characters.”

Though the landscapes and characters are highly stylized, the poses they embody are significant. “I like to add elements of realism in the work and then create surreal dimension in a very stylized over the top features. I started using masks a year ago it was just a natural addition. I like how they add a mysterious aspect and masks can represent anyone. I like that connection. I like to play with partnership and unity. It provides a larger conversation.”

In “Blessed Bonding Woes,” the white figure watches from behind foliage as two black figures sunbathe. The black figures knowingly engage the staring intruder. Grinning masks hide the faces of all.

“Beneficial Boot Wear” looks into the bedroom of the white figure as she tries on a severed black leg. The white figure ties the leg onto her own and flexes her accomplishment out the window. Another leg lies limp across the door. “Beneficial Boot Wear” is an eerie reflection on the violence of appropriation. The white characters’ smirking mask looks on in admiration at the newly acquired limb. Jungle green creeps in through the window as the leg arches out beyond the sill. “Throughout black lives and black women’s spaces we often are being told that we aren’t beautiful, but behind closed doors the white figure is in her house attaching a whole black leg to her body. She’s happy about it! “ “The nipples remind me of baby bottle nipples. I see moms, like when they go out and turn up. The pussy lips came around the same time as the masks. The figures were bare for years. I wanted to show fluidity, add objects and layers to my work.”

“I’m learning a lot about myself through the work I make. This is me and my mom.”

“I wanted to play with the environments I was exposed to as a little girl. And environments where people assume black women should be: the kitchen, the wilderness. I wanted to combine those places. I’m obsessed with clean lines and edges. I like the contrast that the checkboard adds and placing women in a kitchen-like environmentor  domestic space, but showing them in nondomestic ways and settings. So I enjoyed playing with the checkboard in white space or in the forest.” “I took a reference from a ping pong player from Guyana, and it inspired me. I wanted to incorporate the body language from the women in party photos of my aunts. I wanted to show the presence of man, present but not the focal point. She’s still shining and focusing on goals despite his presence.”