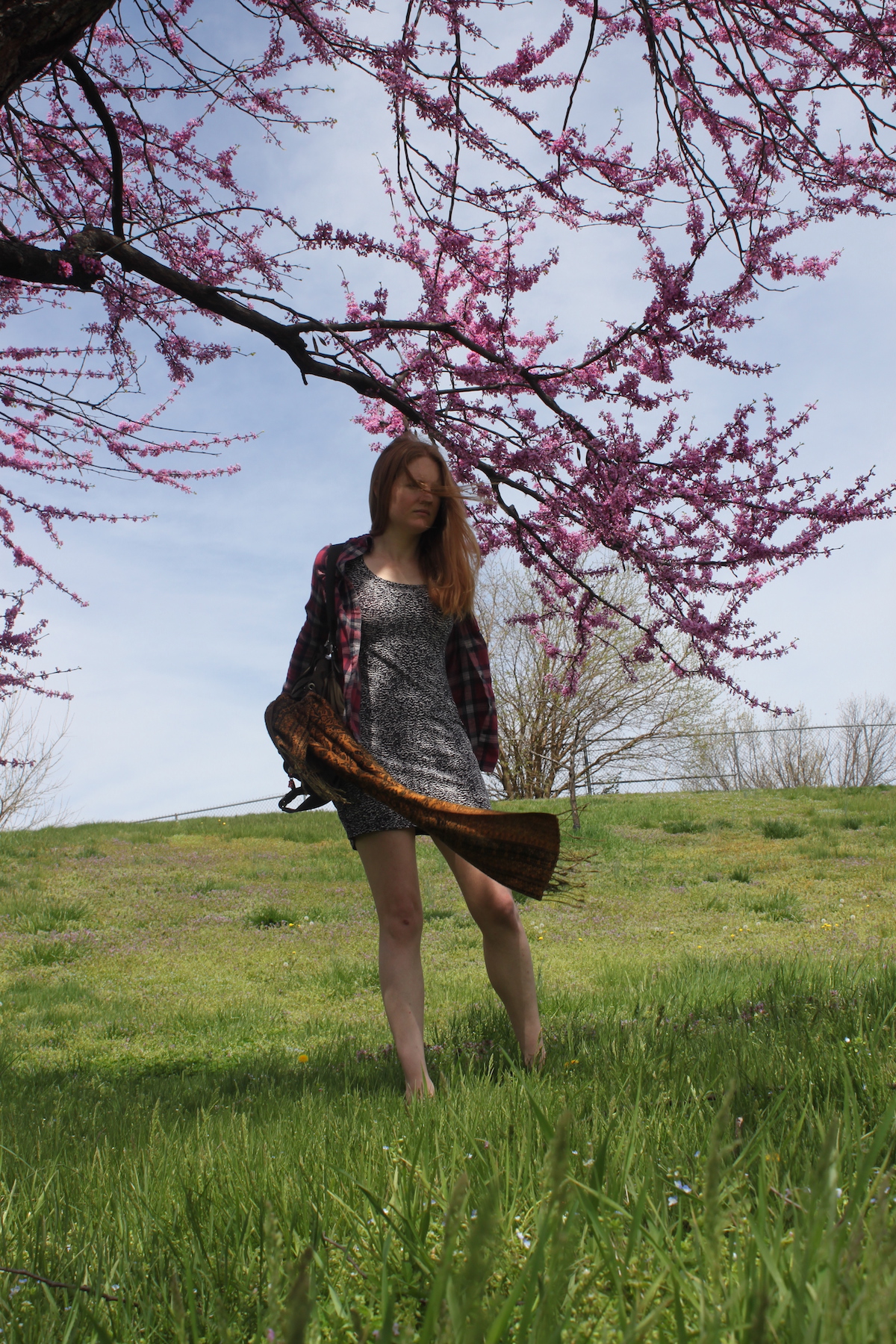 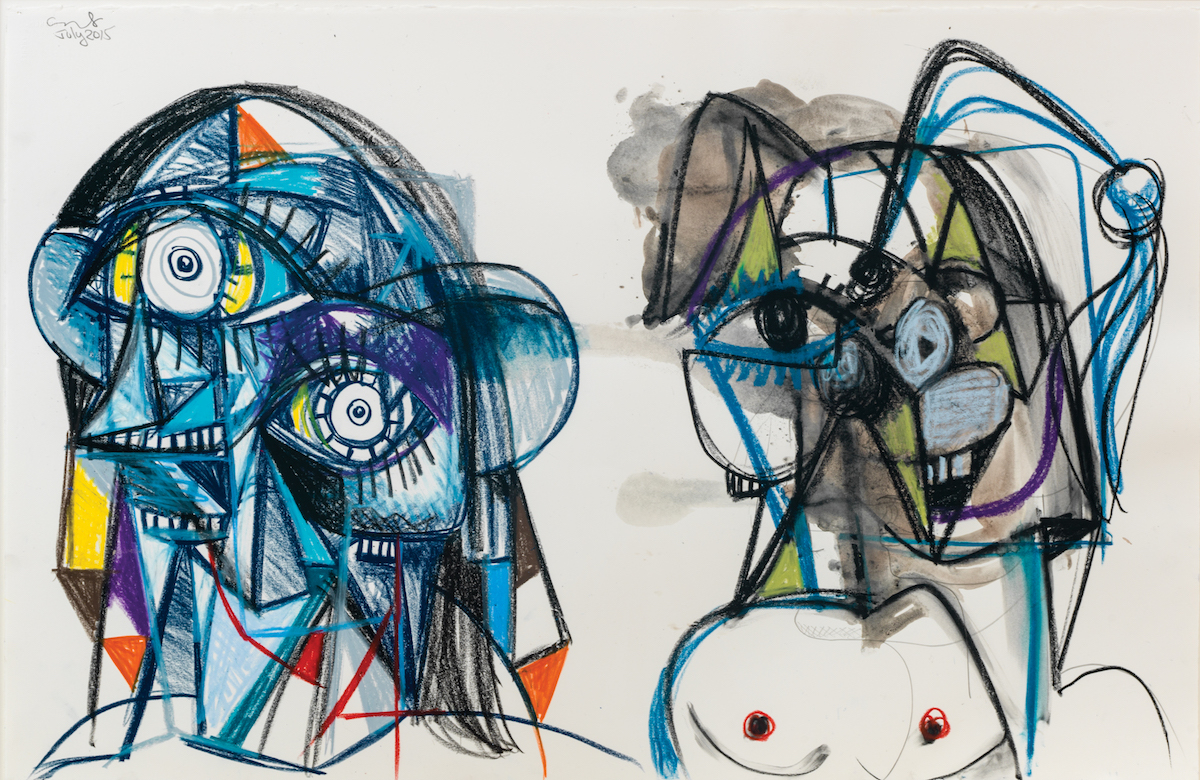 The Artificial Realism of George Condo 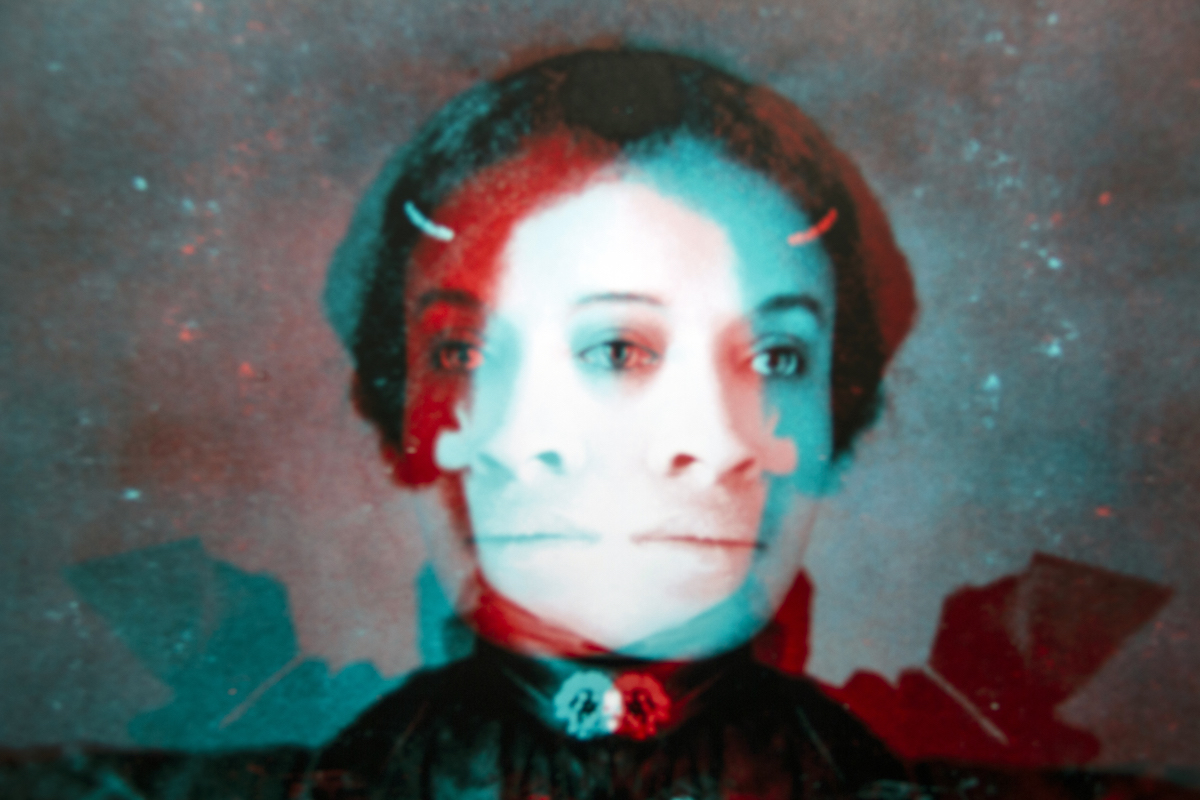 Antonio McAfee is a Baltimore based interdisciplinary visual artist working in photography, drawing, video and collage. His recent works transform and build on historical depictions of African Americans through a process combining glue and prints together to separate and decontextualize the image. While his work is grounded in portraiture he uses abstraction to not only complicate the image, but the response in the viewer.  Recently I visited McAfee in his studio at Area 405 to learn more about his artwork and background. 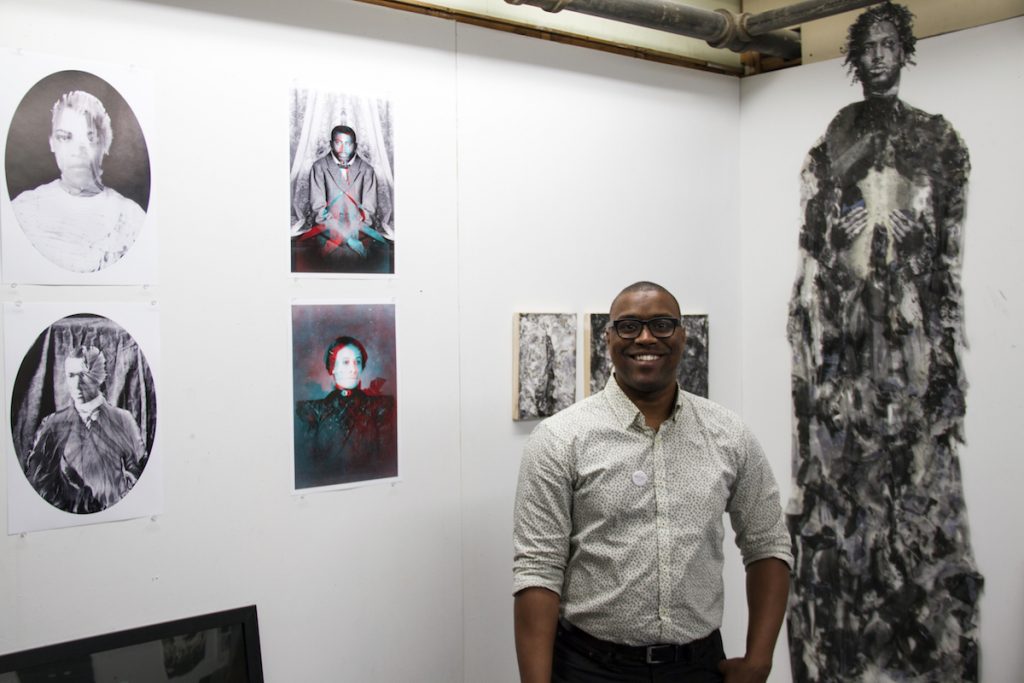 Can you talk a bit about your current body of work

I tend to have multiple projects happening simultaneously in the studio. Currently, I am working on a series of oval composite portraits. Pulling oval formatted portraits from The Exhibition of American Negroes presented in 1900, organized by W.E.B. Du Bois and Thomas Calloway, I make several copies of the same image and altering each print using glue.

The fascinating consequence of manipulating prints this way is each alteration is different. The new versions of these photographs are scanned and overlapped on the computer. I adjust the opacity of the layers so each image is visible. It is also important to modify tones of each layer (i.e. image) so they are distinct and give the appearance of different levels of the figure. The overarching plot of my work is that individuals are undergoing a visual, photographic transformation – from digital manipulation to collage, reconstructing bodies. These oval portraits are a midway point of this transition, between minimal to heavy reconfiguration.

I am also making an 8-foot collage of Sly Stone, similar to my D’Angelo as Mary Magdalene piece. The collages are made of pieces of acrylic medium (glued together) with photographs on them. The photographs are portraits from the Du Bois and Calloway exhibition. The process is in part to enact the cyclical aspect of history informing the present, historical figures forming contemporary figures. 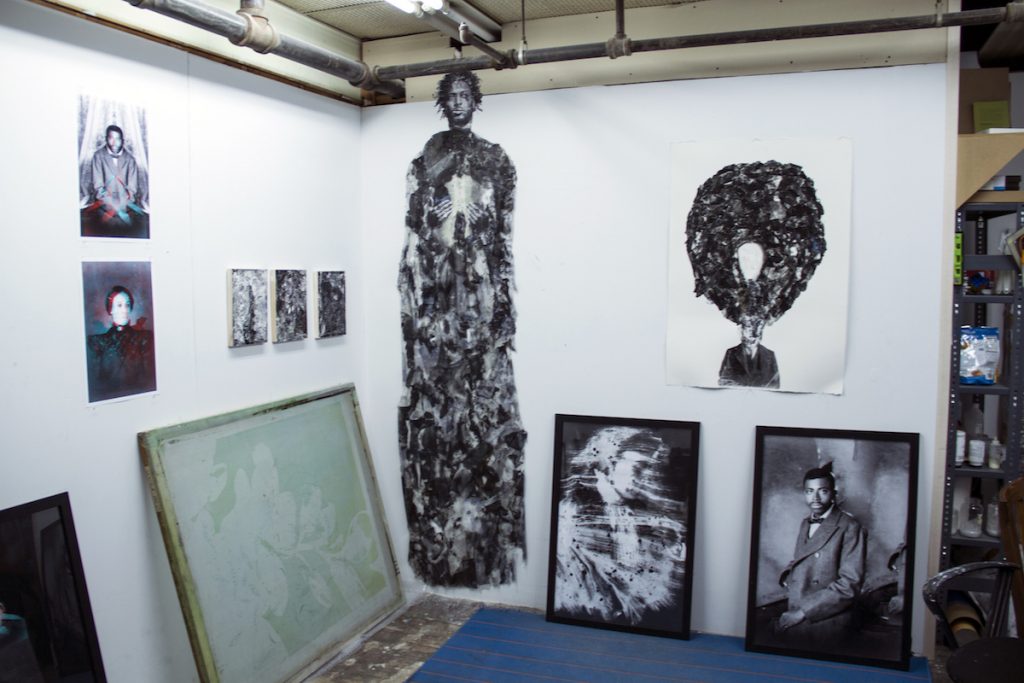 Why did you choose The Exhibition of American Negroes images and what do you hope to convey through this transformation?

While visiting my aunt at her grad school (UC Santa Cruz), she gave me a copy of a chapter from the book Photography On the Color Line by Dr. Shawn Michelle Smith. A very insightful book in part about race and photographic portraiture, and how photographs are used as a record of social/racial hierarchies; in this instance, Dr. Smith was talking about lynching photographs depicting a group of white people and tortured black men. This imagery revealed how those whites’ self-definition was hinged on how they defined, depicted, and positioned blacks, resulting in a dependent definition in which African Americans became a critical factor of how whiteness was defined; an entangled relationship. 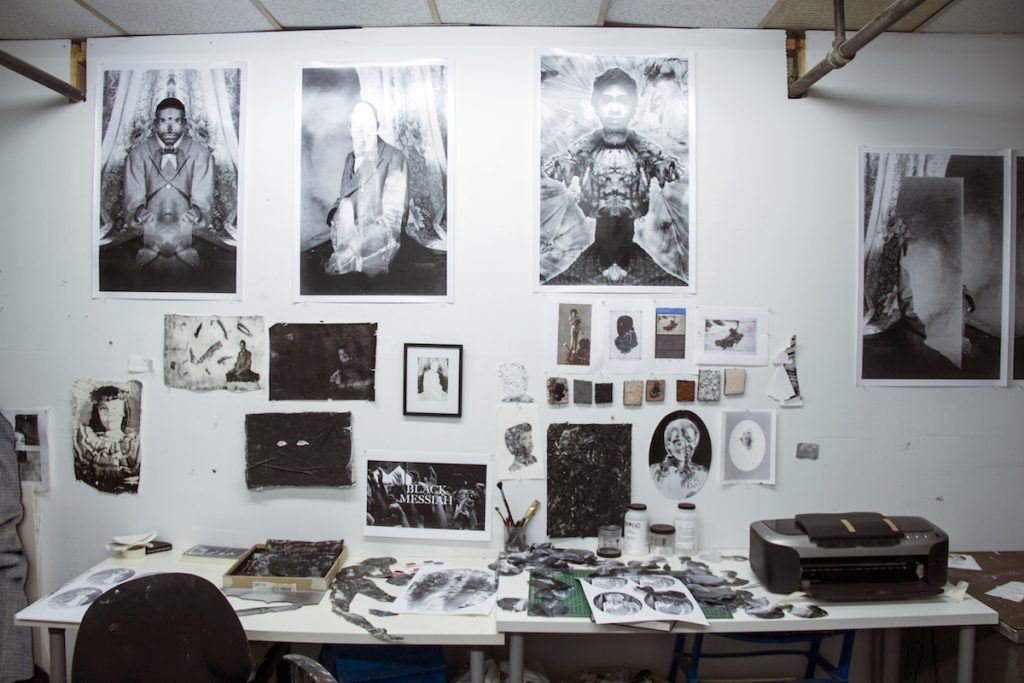 The Exhibition of Americans—commissioned by congress and support from Historically Black Colleges and Universities— was a pictorial, economic/social, and legislative survey of middle-class African Americans in Georgia, which consisted of studio portraits, Georgia black codes (laws pertaining to blacks from 1797), and charts and graphs detailing economic information and migration patterns. Dr. Smith said this exhibition was a counter-archive, counter to racist images and ideas depicting African Americans as primitive and less than. This exhibition functioning as a counter, coupled with the concepts of self-definition revealed in photographs made evident the malleability of understanding, or perceiving others based on portraits.

All of this got me asking myself how could I contribute to the photographs of this exhibition, having the chance how can I disrupt depictions of people that is not hinged on quick comprehension but geared towards complicating photographic portraits—mixing representation and abstraction—to invoke pictures of people that could be thought of as influx, getting closer to how we are which constantly changing. Providing depictions of individuals as if they can control their representation in the photograph, alluding to motion in still frame and making unstable a self-definition hinged on the status of positioning others. 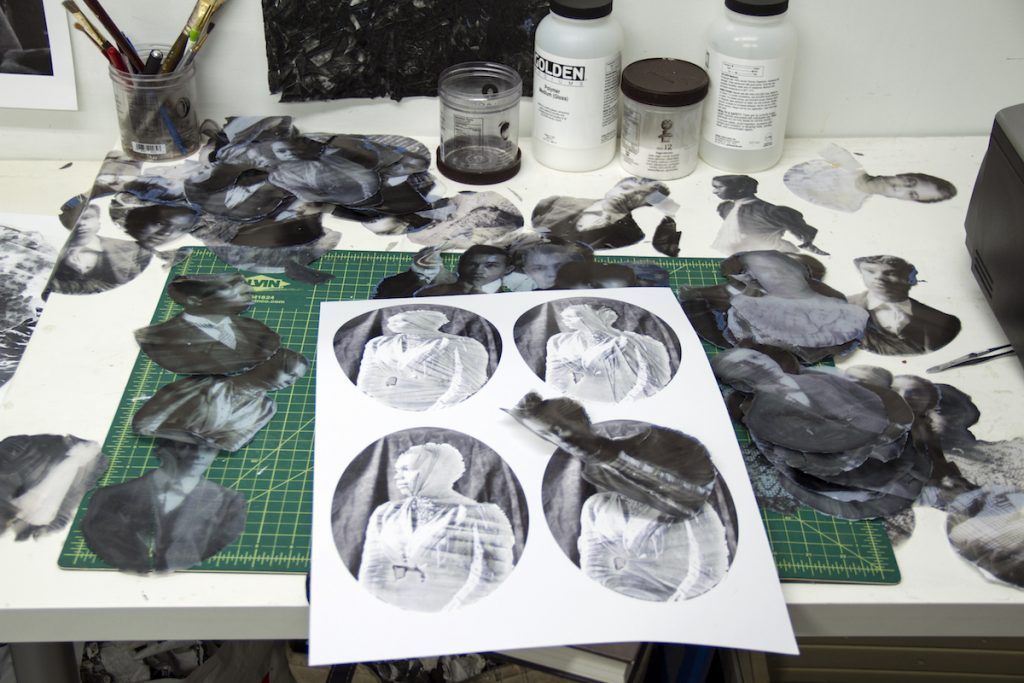 The D’Angelo as Mary Magdalene is really striking work, and you mentioned working on a larger Sly Stone piece. Why these specific musicians?

D’Angelo and Sly Stone are archetypes for a sonic multi-textured aesthetic and atmosphere I am reaching for in my latest collages. In his Redbull Music Academy lecture, D’Angleo speaks about his process for recording vocals, which is an isolated, dim-lit studio, sitting in front of speakers, and singing into the mic. The recording captures ambient sounds during the process. This is in part why there are ambient sounds and texture in his songs. Hearing his records over the years, and being mystified by the layers and tones in his songs, hearing his process seemed to clarify what I was hearing.

He also mentioned learning that recording process from Sly Stone. So, my recent collages are trying to visually capture what they do sonically. I was already making more formal decisions regarding tones of black, gray, and white and considering the environments my figures resigned in so hearing D’Angelo clarified atmospheres and moods I was crafting in the collages. As a result, I keep those two figures close to the work. 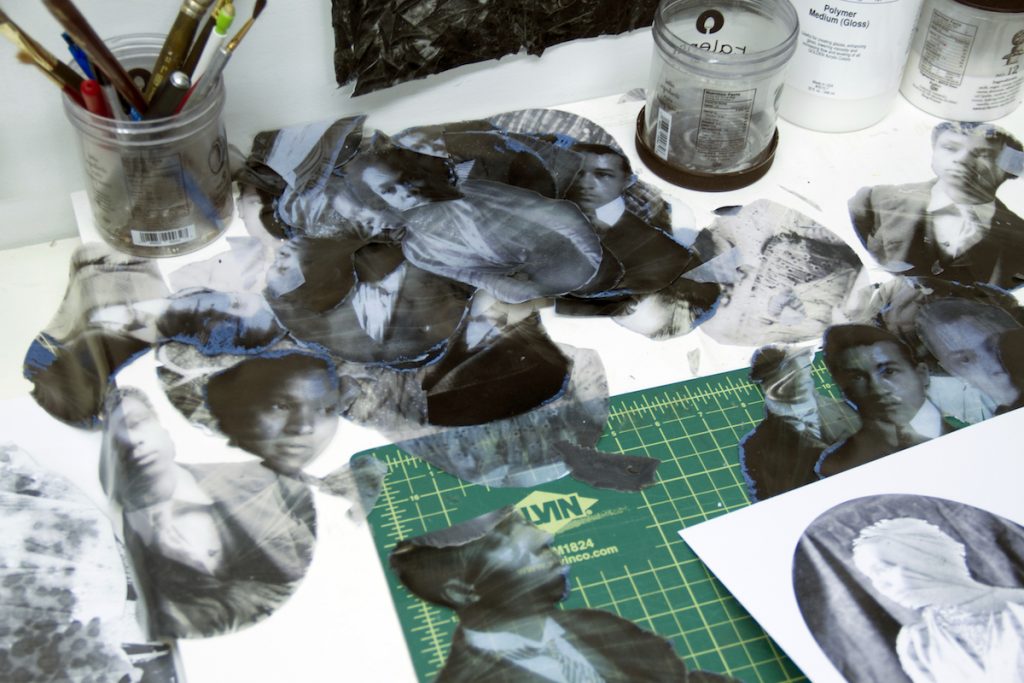 You attended both the Corcoran in DC (2007) and the University of Pennsylvania in Philadelphia (2009) for Photography. Can you talk about the work you made back then how your work has changed or grown in that time?

Early on at the Corcoran, I was mainly doing black and white darkroom photography. Much of it was portraiture and landscape. All the classes I took at Morgan State University, the year before, transferred to the Corcoran so I was able to take extra electives. I also started doing video, screen printing, color photography, and digital photography work. Portraiture has been a consistent since I started taking pictures so that was always there. Reusing historical portraits and researching past events also started then, at the time I was scanning historical portraits from books and printing them in aged book pages.

I continued this work in graduate school (at UPenn) but also started to expand my mediums to coupling sculpture and photographs, drawing, video, and performance. The work at this period was addressing autobiographical issues with my father and family. This was also the point in which I started using glue to cast father, objects,and myself.

I see my work now as a progression of all those periods. I am clearly still dealing historical events and imagery and autobiographical issues embedded the concept and context of the original images. 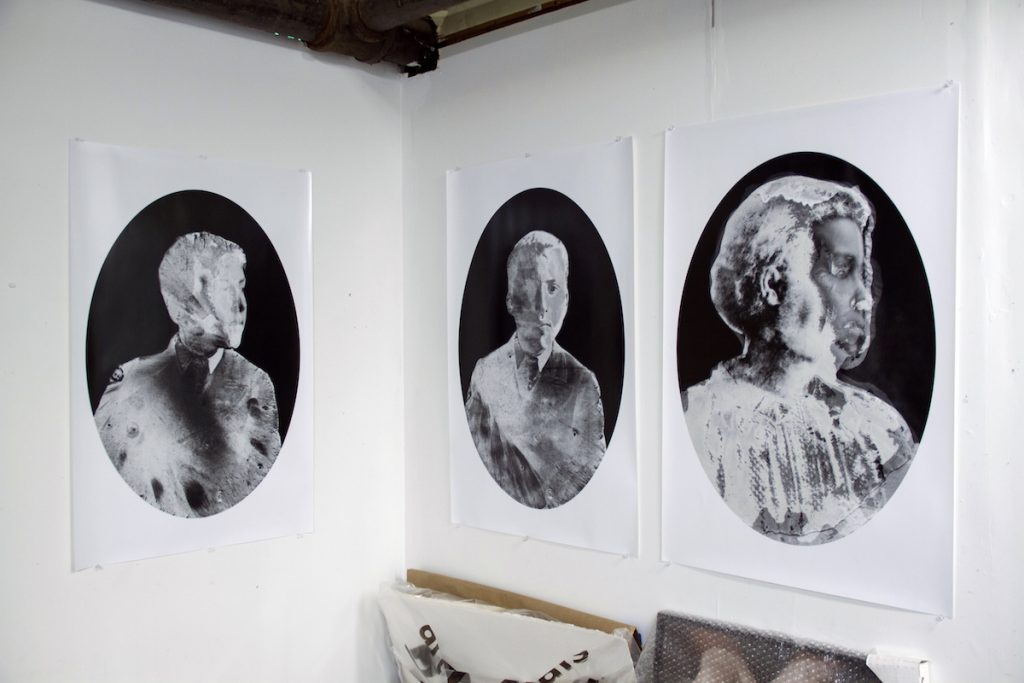 How long have you been in Baltimore and what brought you here?

I moved to Baltimore, specifically Baltimore county, when I was nine. I grew up in Pikesville, Owings Mills, and Randallstown. My father is from Baltimore, so my family moved here when he retired from the army. Prior to moving here, we lived in the midwest and overseas. My mother has family in Virginia so Maryland allowed us to be close to both sides of the family. 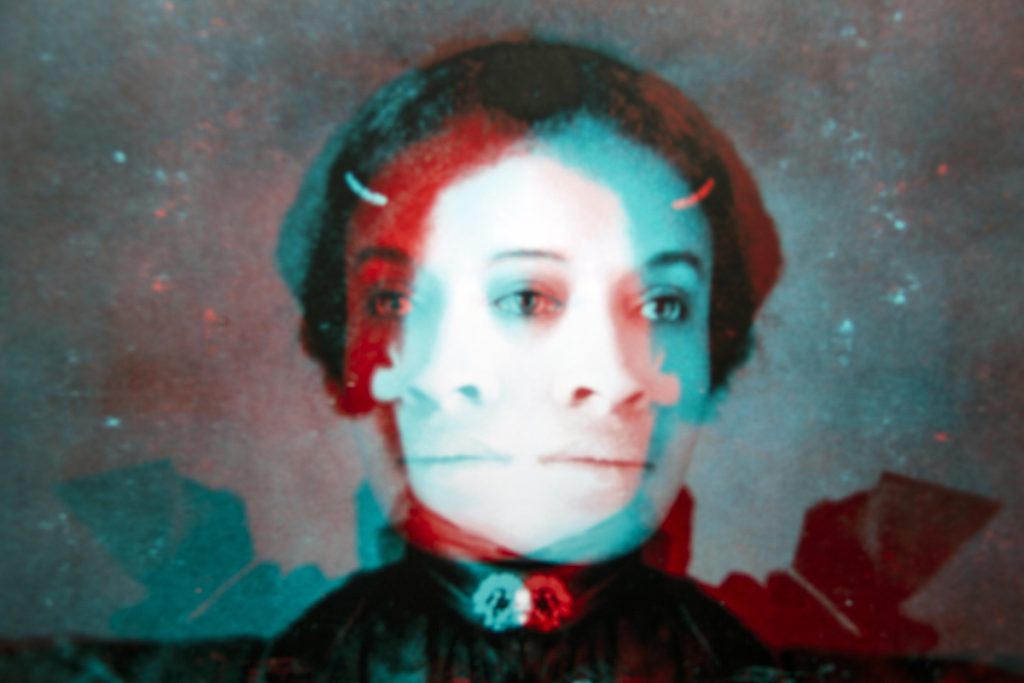 What impact did growing up in the area have on you as an artist?

When I came to Baltimore I had an outsider perspective but I was young enough to be shaped by the city. I had a good mix of friends so I got exposed to different cultures. My high school (Carver Center for Arts and Tech) introduced me to photography and contemporary art and i’ve been focused on those two ever since. Being around my family has been important. Spending time having one-on-one conversations about their lives, being able to work with family photos and have them participate -in my past work, and all around getting closer helped me develop a lot. 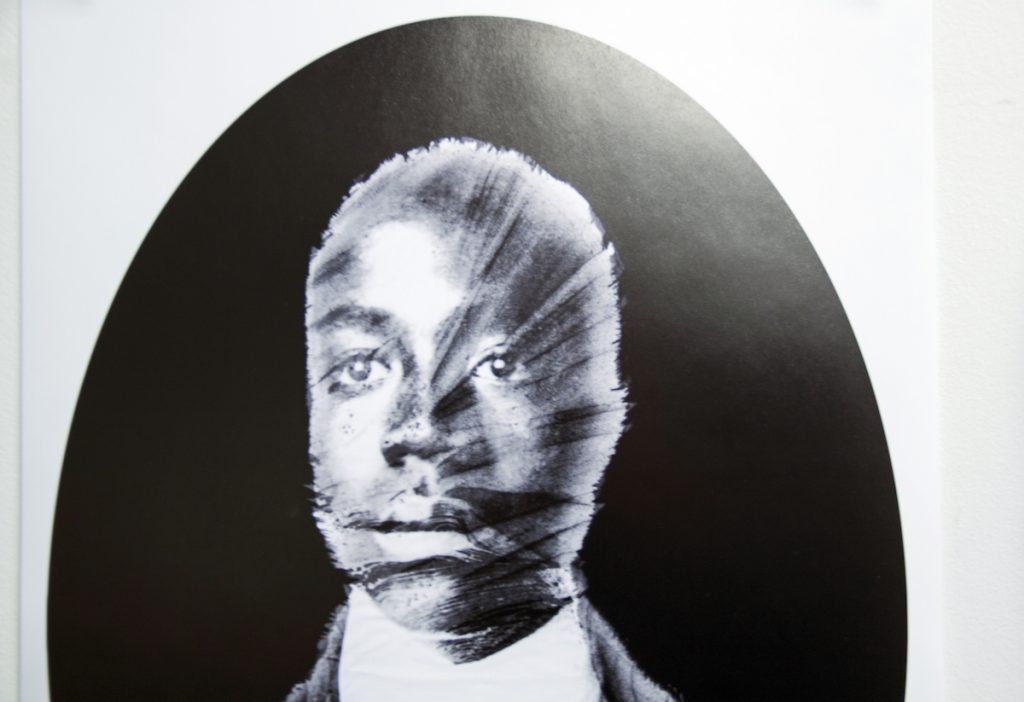 What is your day job and how does it affect your art practice?

I teach Digital Photography at Montgomery College, Germantown. Being a teacher keeps me in the loop of what is currently happening within the medium. It encourages me to be update with equipment, software, and current outlets of photo, such as social media and publications. It is also very beneficial engaging with a variety of people who are interested in the practice, assisting students in figuring out what they care about and how to capture that in a way that is distinct to them.

At the Reginald F. Lewis Museum, I am a Museum Specialist. I install, deinstall and maintain exhibitions and art works. It is remarkable to be around a wide array of cultural objects and art works on a regular basis. I get to learn about historical and current experiences and how they are articulated. On the practical sides of the job, I get to create environments which best presents objects and information. The goal is to understand viewers’ experiences within the space and crafting an atmosphere and presentations of text and items that best induces a learning and sensory experience. These are factors I am consistently considering in my studio. The equation of what I am making and how to best present it to an audience—in consideration of an environment.

I also work as a sign installer at a sign and graphics company based in Federal Hill. This is position is informative regarding production and installation techniques. I get to work with and produce images on a wide variety of substrates and scales; and problem solve installation of pieces in a building or outside. 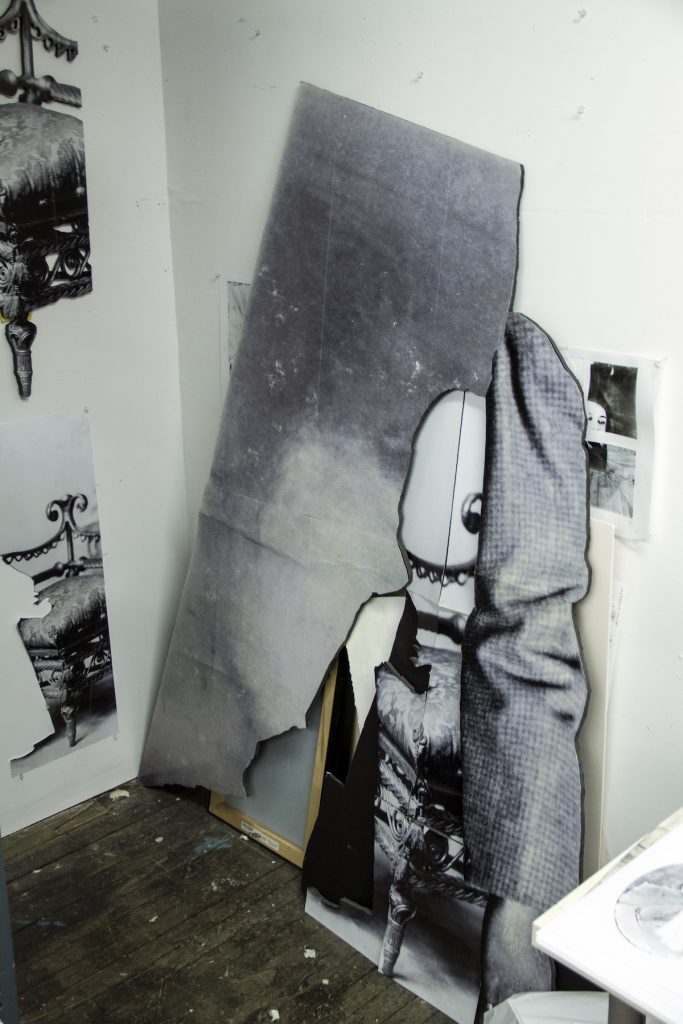 What exhibitions do you have coming up?

To branch off from the previous question, I am participating in a group exhibition at Joyce Scott’s public artwork at Druid Hill Park. The show is titled Everyday Utopias it is curated by Sheena Morison, a Curatorial Practice MFA candidate at MICA. I am presenting banners of four of my oval portraits. The sign job has directly influenced how I plan to present images for this space. I have to consider factors such as weather, installing images not on a wall, and safely securing pieces. The production team at the company helped me figure out my substrate  and installation options.

Recently, I had a couple of pieces at Terrault Contemporary’s Not The Grammys show, that was up through April 1st. Two pieces were included in the Washington Projects for the Arts’ Auction Gala. My work is also in The Delaware Contemporary’s Contemporary Gala.