“Human-Beingness” According to Valerie Maynard 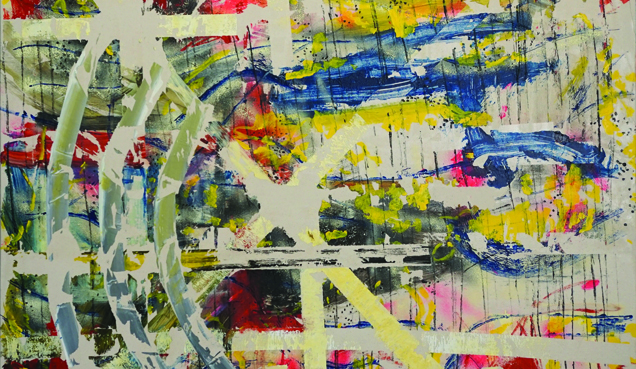 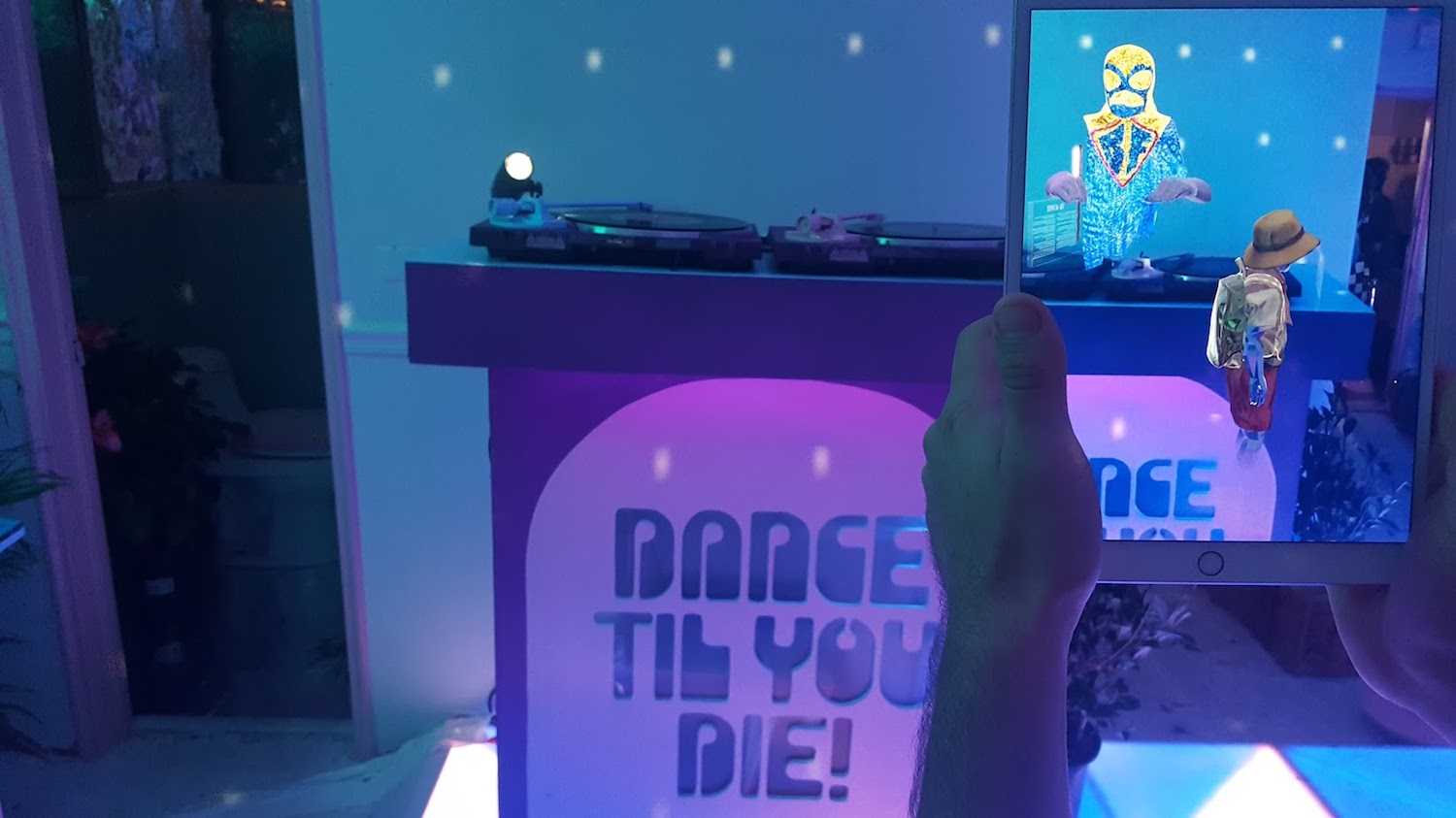 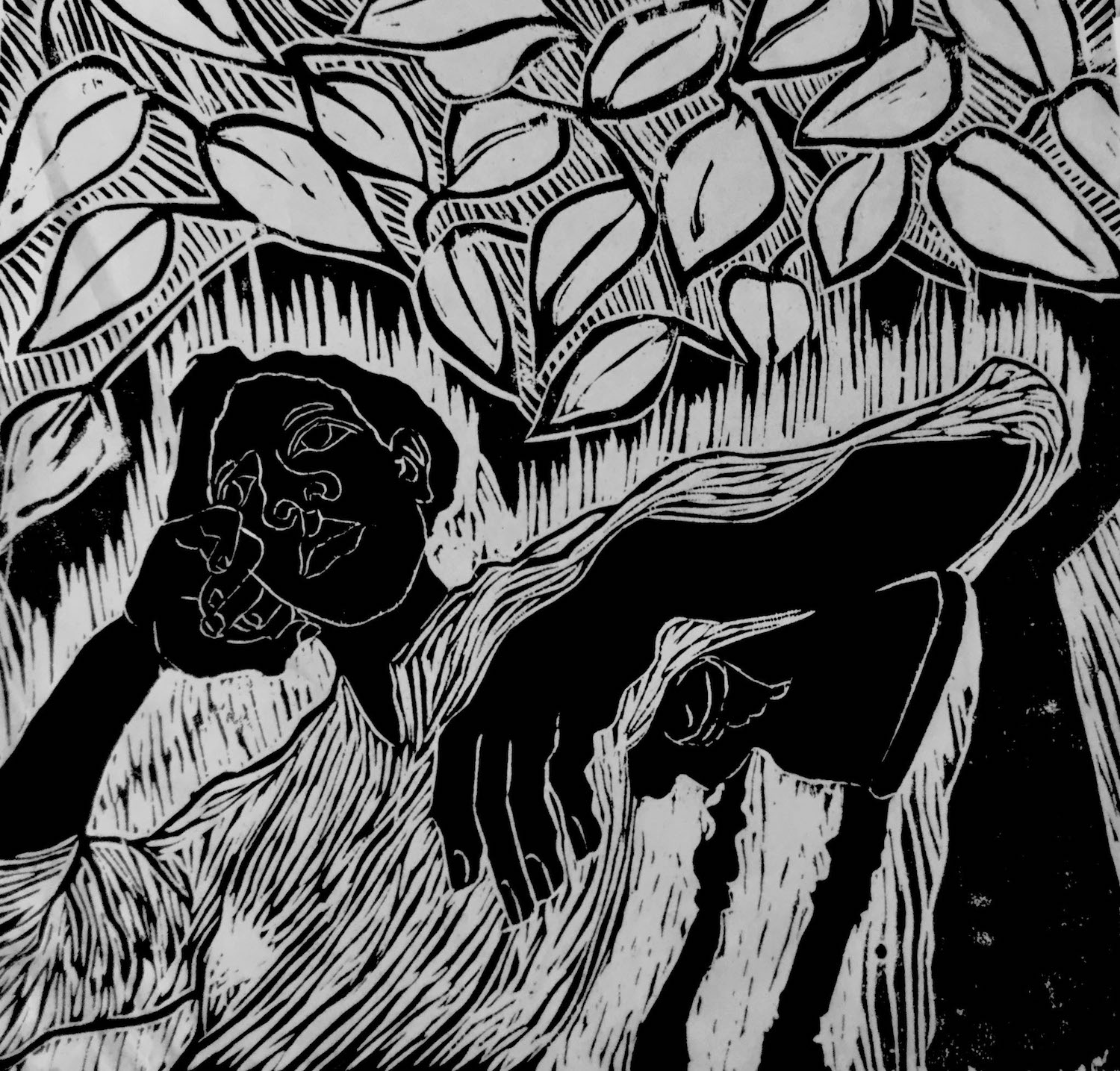 “Human-beingness is who I am. I don’t think of myself as an artist.” – Valerie Maynard

Valerie Maynard is one of the most significant contemporary artists of our times, a legend who has always walked among legends. Many of her predecessors, like Charles White or Elizabeth Catlett, and her contemporaries, James Baldwin, Langston Hughes, and Amiri Baraka among others, who have contributed to the canon of Black creative genius, have become gods for my generation, sanctuaries whose sacred books and visualizations I return to again and again for affirmation and critical discourse.

Long before the BLM movement affirmed the acute necessity for America and the world to acknowledge that black life matters, Valerie Maynard’s extensive catalog of sculptures, woodcuts and lithograph prints documented the humanity of African American experiences in Harlem New York, and Baltimore Maryland. 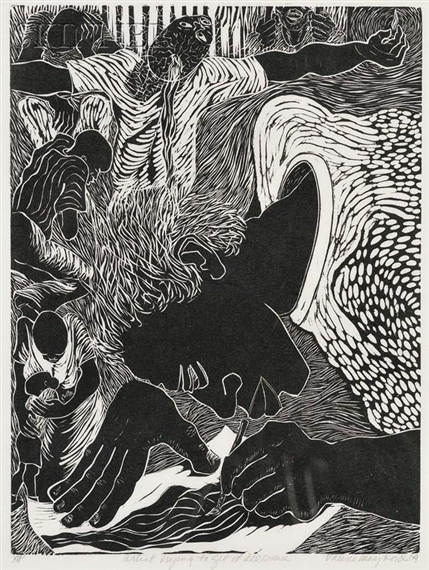 The Artist Getting It All Down, Linocut / Rice Paper 12 X 9

Maynard’s work is an archive of presence, a series of beautiful and intricate reflections on the essence of what the artist calls, “human-beingness,” the core of one’s humanity devoid of other categorizations. It takes a lot of work to be present, to show up daily in the world, unapologetically as you are. Being can be heavy, and being Black can be a lifelong negotiation.

Maynard has lived long enough to witness countless revolutions in the ways black identity is defined, the gains and setbacks of myriad liberation movements, and the rupture and reclassification of constitutional mandates presumably ascribed to uphold freedom and justice for all. Devotion, a new exhibition of seventeen printworks on view at New Door Creative, chronicles those victories and losses, but it also focalizes the quiet moments, the beautiful mundane instances lived by everyday people.

I had the opportunity to speak with Maynard about her process, and the impetus for her creations at the gallery. Devotion presents selections from Maynard’s vast collection of woodcuts and lithograph prints created over many decades. As I viewed the exhibition, I wondered if Maynard was discouraged that, despite innumerable sacrifices, including the martyrdom, imprisonment, and expatriation of brilliant men and women, that basic civil liberties are still not guaranteed or equally defended for Othered bodies. I was surprised and humbled by her response.

“To me life is like the river, the ocean. It seems its always been here, and who controls it, how they try to control it, and the depth of those beings that they are trying to control that have been here for centuries. It’s only bodies that you are working with, but that’s not who it is, so I have no expectations like that. What my feelings are, I came here with them. You know, you just don’t get present because you get born this time, you have to remember.”

The works that Maynard produces are as much about herself and her memories, as they are about the communities she observes. The figurative portraits and landscapes Maynard realizes mirror the lived experiences of people and communities she has lived and worked among. Printmaking is an intimate process. The subtle intricacies involved in Maynard’s style of woodcuts and lithograph prints accentuate an aesthetic that celebrates the complexity of black identity, and mourns its collective struggles.

“You are a composite of everyone who has come before you. That’s your voice, your soul, your person, your eyes, and everything you do,” Maynard says.

What I appreciate most about Maynard’s aesthetic, and Curator Michelle Talibah’s selection of works is that they are earnest, humanizing articulations of black life that reverberate an urgency from the eras in which they were made, but remain profoundly relevant. In “The Artist Getting it All Down,” a self-portrait of Maynard entrenched in artmaking is encircled by images of suffering and injustice; a woman clings tightly to a small boychild, blood pours out from the cracked skull of a man whose arms and body cruciate the landscape. Another man peers through the bars of a nearby jail cell, as two more curl up to avoid the horrors that surround them all. Similar iterations of violence recur throughout Devotion. 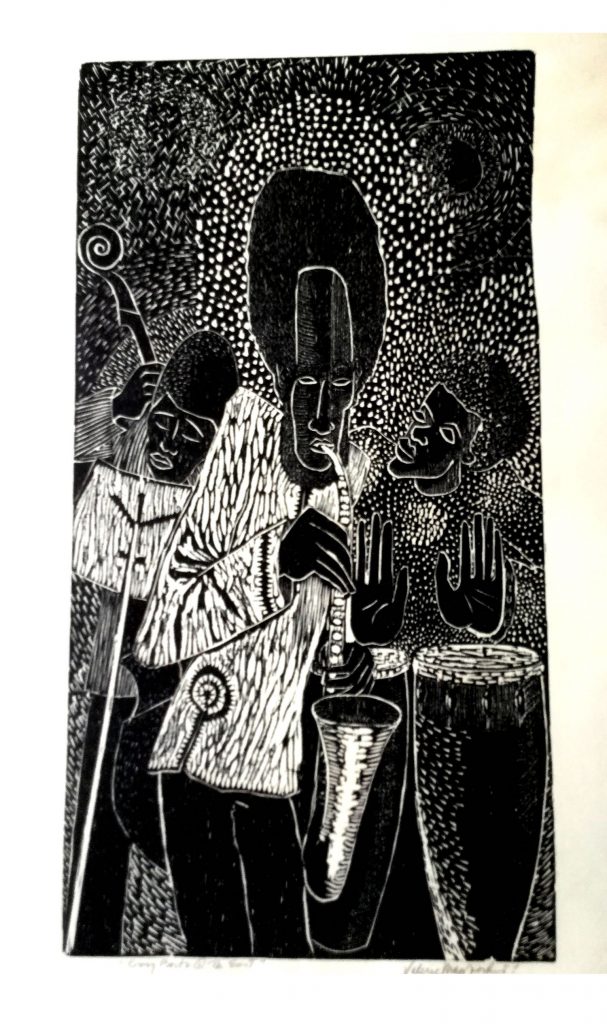 In “Only Respite” a young boy slumps shoes off, eyes closed in a chair. One immediately presumes that the boy is sleeping peaceably. Then I noticed the small hole in the boys chest, and the dark streams that flowed down the fabric of the chair. The boy will never wake up because he has been killed by a gunshot to the heart. The scenes are heavy. Triggering. All who view the work are reminded that the devastating violences Maynard visualized in the seventies, a pivotal period for civil rights, persist.

One of the highlights of Devotion is its inclusion of transcendent figurative portraits that convey black identities as deific beings. In “Mama Sea’s” a woman holds a small child and stands in the center of a cityscape. The child’s umbilical cord remains attached to the woman’s torso. Starbursts shine from one of the child’s fists and the crown of a distant figure who walks down the street. “Mama Seas” revisions the archetype of white sainted femininity as young, black and urban. Bethlehem is a block in Harlem or Baltimore. The sacred halo is a beaming afro. Maynard’s progressive use of religious iconography creates affirming, and unabashedly black likenesses of sainthood, purity and nurturing divinity. 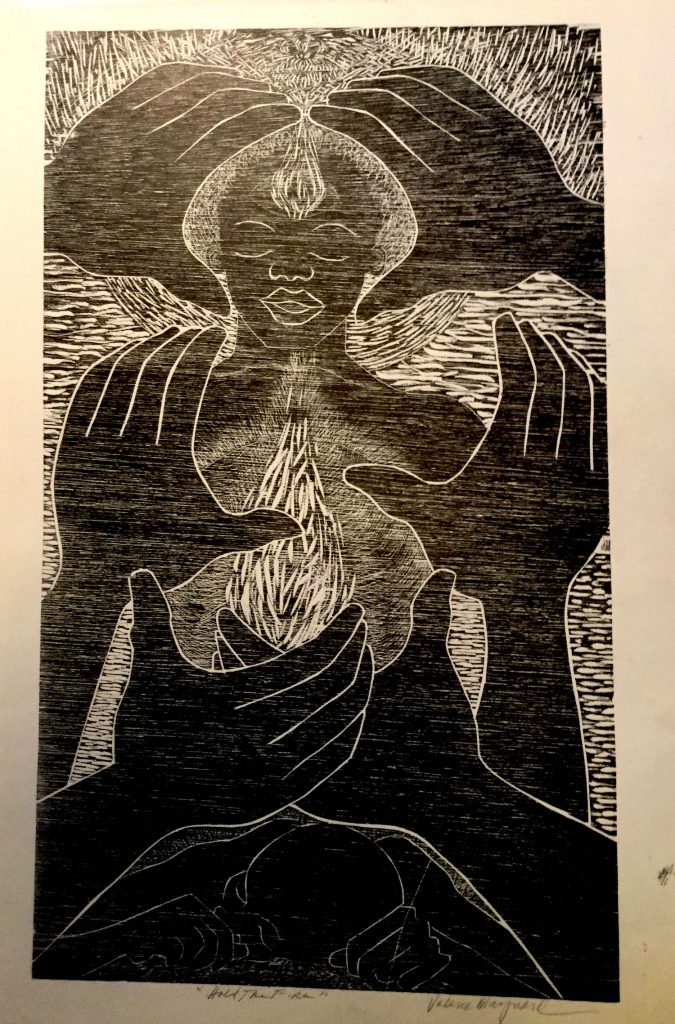 In “Hold That Fire” a young genderless figure rests in meditative contemplation at the center of the frame, their third eye and chest glow with vibrant flames. Black hands hover around the figure’s body. The shadow of another body lays unconscious at the base of the frame. I thought about the tradition of laying hands, the practice of allowing healers to place their hands upon a believers’ body so that miraculous manifestations could be realized in the life, health, well-being of the person that was touched. Spiritual faith-based systems have been undeniably significant weapons engaged by African descendants to combat the physical, psychological, and spiritual traumas of supremacist oppression. Maynard captures the spirit of that hope, the supernatural expression of rapturous healing.

Devotion is a testament to Maynard’s tireless struggle to visualize life, the images and experiences that imprinted themselves on her consciousness, and moved her, as if she were a vessel for the spirit of the art, inspired by the spirit of her people, to create and express a dynamic spectrum of human-beingness.

Devotion is on view at New Door Creative thru December 22, 2017. For more information, visit www.newdoorcreative.com