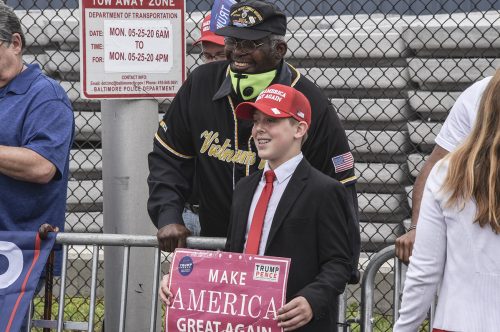 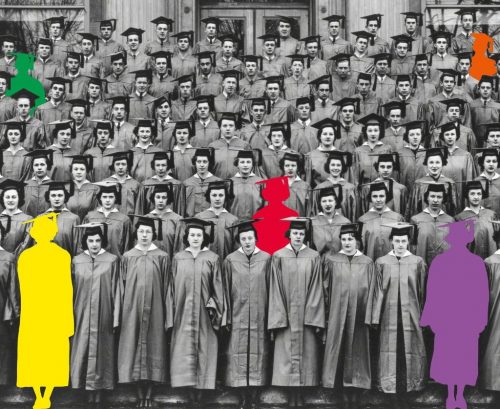 Virtual Graduation Speech for the Class of 2020 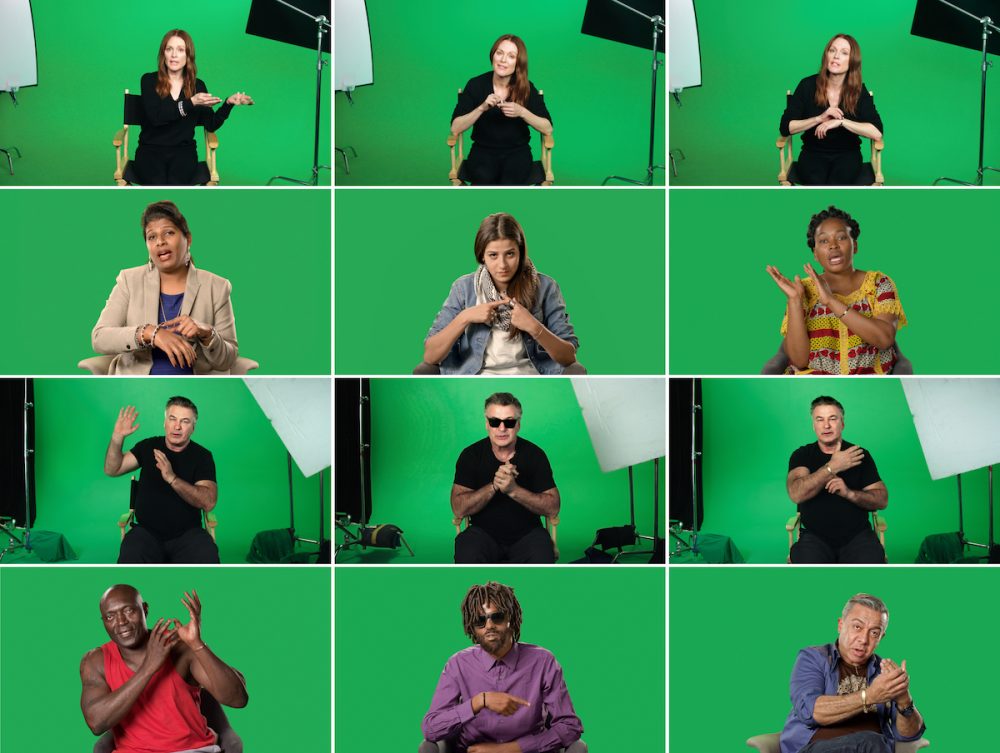 With all of us ostensibly inside, talking less or at least talking to fewer people, the appeal of hearing voices that aren’t our own for extended periods of time has taken on a certain restorative luster. I’m comforted by chatty, discursive podcasts such as Wind of Change (about whether or not the CIA wrote Scorpions’ hit “Wind of Change”) and funny and frustrated political podcasts such as Street Fight Radio or Trillbilly Workers’ Party, hours-long riffs on the current state of the world that take the cruel bloviations of talk radio and turn them on their head a little. And what I get out of that is different, more intimate than watching movies or television. But I have also seen some lengthy visual works overloading the viewer with information, telling as much as showing, and talking nonstop. And they suggest that podcasts have maybe messed with filmmaking a little bit.

Psychedelic cartoon The Midnight Gospel popped up on Netflix on April 20, the official unofficial weed-smoking holiday, one day after April 19 (LSD holiday “Bicycle Day”), and right in the middle of what then felt like the pandemic at its most gnarly, deadly, and mysterious. And that all seems appropriate: The show is about drugs and ritual and the incomprehensibility of living and dying, which a mismanaged pandemic sure does put into stark relief.

Using interviews from co-creator Duncan Trussell’s podcast Duncan Trussell Family Hour, The Midnight Gospel transports those heady, honest conversations about mindfulness, death, addiction, harm reduction, and more into a futuristic world inhabited by Clancy (voiced by Trussell), a curious, self-reflective “spacecaster.” With the assistance of his helpful HAL 9000 by way of Wilson from Home Improvement computer, Clancy travels to different planets to interview someone from that planet for his spacecast—which is like a podcast but in space—and it usually happens while they escape some sort of life-or-death situation.

Trussell described The Midnight Gospel as “what would happen if you replaced the dialogue of Indiana Jones with podcast dialogue,” which is a pretty good way to understand this endless scroll of a show: Very present and complex conversations play out over ornate, extended action sequences. In the first episode, Dr. Drew Pinsky voices the president who talks to Clancy about his harm-reductionist approach to drug use (“There is no such thing as a bad drug”) amid a zombie invasion.

The action makes the talks less tedious and acts as a sort of paratext, obliquely manifesting the episode’s big themes. In one episode, Clancy traverses a medieval landscape with a woman warrior in mourning voiced by Vipassana teacher Trudy Goodman. We follow Clancy and Trudy as they ride a dripping green horse and fight off monsters and ponder how hard it is to listen sometimes as Trudy seeks revenge on a prince (voiced by Pauly Shore) who killed her boyfriend.

The kindness Trudy exhibits and discusses appear to be in contrast to her cutting off a man’s arm or blowing up an evil witch, though it’s really about being open and soft but not stupid and never a sucker who can be stepped on, either. The worlds on The Midnight Gospel are often childlike, naive, grotesque, and violent—fitting for a show all about embracing chaos and co-created by Pendleton Ward of Adventure Time.

Candice Breitz’s Too Long, Didn’t Read wasn’t intended for the internet, it was supposed to be in a museum. It opened at the Baltimore Museum of Art on March 15, just before the museum closed to the public because of COVID-19, and now the installation has been turned into a flashy website. As a multichannel installation in a museum, its hours of video are hard to witness all at once, which is the point. On the BMA’s website though, this extended, entertaining lecture on sex work delivered by a 12-year-old (as if to say, even a kid can understand why sex work is work, so why can’t you?)—interrupted by singing, samples, auto-tune moans, one awful clip of our awful president, bursts of emojis, and more—can roll right along in the background, like a maximalist social justice podcast.

Breitz’s Love Story, installed in the South African pavilion at the 2017 Venice Biennale, contains the stories of refugees told in their own words and also delivered by actors Alec Baldwin and Julianne Moore, a disarming stunt that mocks the starfuck-y qualities of human-rights advocacy and its well-meaning stars that sometimes cloud the real stories. And it implicates Breitz, a white South African, too: What privilege—and baggage—does she bring to telling these stories? Less than Baldwin, a high-profile liberal for sure, but more than the refugees whose stories she captured and also abstracted. It also makes Baldwin and Moore look a little ridiculous, which makes them seem more like regular people than famous people, which makes their performances of these stories rather intimate and offers up another way to experience the refugee crisis.

This work, though, cannot sneak up on you on a website the way it would projected as intended at the BMA all day. This was a big part of the appeal of last year’s DIS | A Good Crisis at the museum too, where a monologue about universal basic income and the whys and hows of the financial crisis as told by the Night King in Game of Thrones were 20 or so feet from the gift shop and allowed museum-goers to wander into a room and get radicalized.

Too Long Didn’t Read is the story of how Amnesty International’s attempts to decriminalize sex  work were thwarted by anti-trafficking and anti-sex work interests and how maddening that is, and Love Story, a collection of refugee stories, some told across hours of video rather than taut soundbites picked for maximum “impact.” At your computer, Breitz’s narratives are clearer, all of the information they provide accessible, digestible even at movie-length.

Directors/writers/narrators Jon Bois and Alex Rubenstein’s six-part, three-hour series Dorktown: Seattle Mariners, about that sad and weird baseball team, could for the most part just be listened to rather than watched. You see still images, graphs, maps, and numbers, which expand or shrink to the side of the frame or get stacked on top of one another while Bois and Rubenstein take turns describing the team’s ridiculous history while Jan Hammer synths or Night Court-theme smooth jazz slap dispassionately in the background.

As Bois and Rubenstein tell it in episode one (titled “This is not an endorsement of arson”), an anarchist who took to burning anything and everything down in 1932 burned the stadium of the minor-league Seattle Indians which led to a new stadium being built which, almost 40 years later, enabled Seattle to get a Major League Baseball team, the Seattle Mariners.

The point is nothing happens normally when it comes to Mariners history, and the way they get to that point must be circuitous and also includes: a team prank involving a hotel bathtub full of Jell-O; Mariners star Jay Buhner invoked on Seinfeld that one time; and a pitcher who cut his face open with a tack taped to his finger, trying and failing to cheat. The whole thing is a celebration of the aside and the footnote for a team that is almost entirely made up of footnotes, except for a few standouts such as ‘90s superstar Ken Griffey Jr.—though even his career transmogrifies when he leaves one day before a game in 2010 and drives across the country, a possible nervous breakdown reconfigured into his retirement announcement.

Dorktown: Seattle Mariners also operates as an antidote to The Last Dance, that sturdy, fascinating documentary about sports sociopath Michael Jordan that was fueled and also felled by filmmakers’ access. In Dorktown: Seattle Mariners, there aren’t interviews at all, and archival footage is minimal and the dramatic moments happen when someone is called a “goofus maloofus” by the narrators or a grid stretches across the screen and shows you a bunch of baseball statistics. This is sports nerditry gone vaporwave and a story told almost entirely through one of narrative podcasting’s most effective tools: the tangent.