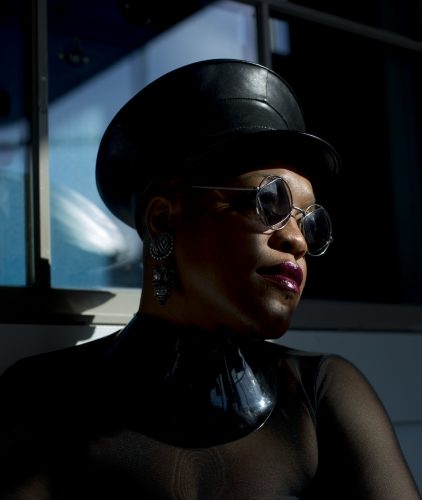 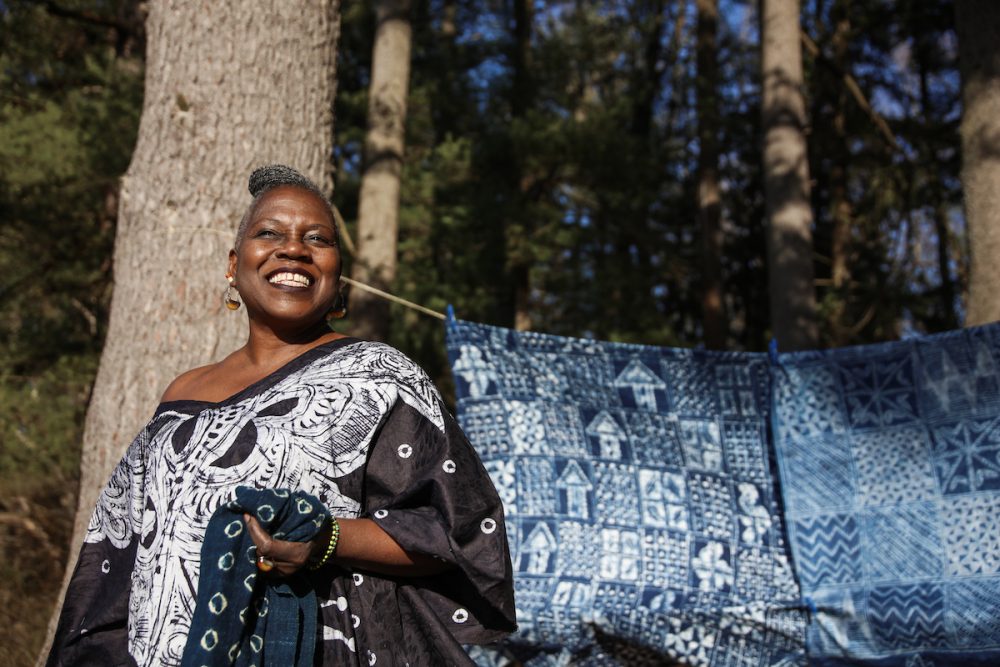 In 1996, driven by wanderlust and a deep desire to find authentic costumes for her troupe, The Sankofa Dance Theater, choreographer and creative director Kibibi Ajanku journeyed to The Gambia in West Africa. During her travels she observed and fell in love with traditional indigo dyeing: rows of deep vats filled with natural resins expertly aged to create transcendental hues for àmùrè (fully dyed), àdìre oníkó (tied resist/batik) and àdíre alábáré (stitch resist) textiles and fabrics. “That was the first time that I saw cloth come out of the vat as green and turn blue as it began to oxidize,” said Ajanku. “I will never forget that moment. It was so magical and so inspirational.”

When I visited Ajanku to observe her process, she spoke about the vat of dye as if it were a living organism. “It’s not happy right now,” Ajanku sighed as she stirred the deep blue substance with a long stick, pausing occasionally to review data logs that documented sucrose feeding times, pH level measurements, and color profile evaluations.

“A happy vat has a healthy-looking bloom on the top,” she noted. “Maybe she’s lonely… let’s talk to it awhile. Maybe she’s hungry… we’ll feed her.” As she stirred and poured small amounts of sugar into the recipe, she spoke softly like one might to an ailing friend in need of encouragement. After a short while, the vat reacted: The once flat viscous liquid bubbled and billowed a bloom from its belly up to the surface. I learned in that moment that indigo is alive. It requires close attention and care to survive and produce the rich pigments that draw people to it.

Ajanku’s affirming words and gentle consideration helped to extend the lifespan of the vat. After weeks, sometimes months, of dyeing fabrics, the deep tones that define indigo dim into pale, waterlogged pigments that confirm the vat is no longer viable. It is telling then that a process that thrives from empathic connection would appeal to Ajanku, an artist who has dedicated the last thirty years of her life to engaging in practices that bring communities together.

From Ghana to Benin, Benin to Nigeria, Ajanku has apprenticed with master dyers who retain knowledge of traditional indigo dyeing techniques, an art that is being lost to synthetic processes. There is a tension between the tedious methods that traditional indigo dyeing requires and the immediacy that modernity demands. But Ajanku is driven to pass on the techniques to others in America so that those traditions are not forgotten.

Over the last two years, Ajanku has served as a resident artist, researcher, and community connector in the Baltimore Natural Dye Initiative, part of the Natural Dye as Cultural Connector project in collaboration with the Maryland Institute College of Art.

It is ironic that the indigo blue that has come to define an imagined archetypal American aesthetic—the rough and rural denim of Midwest cowboys and white working-class icons from Clint Eastwood to Bruce Springsteen—when it is not a crop native to this country. Like so many species of plants appropriated and later adopted as American, indigo production in America is intrinsically bound to forced labor, initially by indigenous populations and later by enslaved Africans.

Over the last two years, Ajanku has served as a resident artist, researcher, and community connector in the Baltimore Natural Dye Initiative, part of the Natural Dye as Cultural Connector project in collaboration with the Maryland Institute College of Art. Along with other scholars, farmers, and artists including Fiber Department chair Piper Shepard, faculty Valeska Populoh, and resident artists/farmers Kenya Miles and Rosa Chang, Ajanku has spent time teaching students at MICA and residents in Baltimore about traditional and sustainable uses for natural dyes.

“The cross sections of community and the intersections of artistry has been productive for the institution and for the students. In an uncustomary way, it has allowed us to bring in more members from the community, too,” she said. The largest outcome of the initiative is the establishment of the Baltimore Natural Dye Symposium, a conference that will allow artists, natural dye experts, and community members to learn about the project and the potential practical applications of natural dyes.

Ajanku's desire to learn from master indigo artisans has catalyzed extensive travels across the Carolinas and West Africa.

Most recently, Ajanku completed an apprenticeship and artist residency at the Nike Centre for Art and Culture in Òsun State in the city of Òsógbó in Yorubaland, Nigeria, named after and founded by Chief Oyenike Monica Okundaye. “Nike herself has been instrumental in training three generations of people in a way that is connected to original traditions and has brought forth newer ways of working,” Ajanku said.

Though significant scholarship has been conducted about the cultivation of indigo throughout Asia, a global producer and distributor of products and textiles derived from the crop, Ajanku’s research focuses on the ways indigo was transplanted from West Africa into the American south by way of the transatlantic slave trade. Colonial experimentation with indigo cultivation is believed to have started in South Carolina in 1670. The heavy reliance on enslaved African labor and quick exhaustion of nutrient-rich soil that indigo requires contributed to its short reign as a competitive cash crop. By the end of the 17th century, rice had become Carolina’s major staple.

Ajanku has struggled to discover material vestiges of indigo production in America. “You can find artifacts for cane but not for indigo,” she said. But “sometimes you have to jump across and jump back in order to come forward.” Though much of her research relies on the review of historical texts and journals about early American agriculture, Ajanku also uses an intuitive investigative approach that places experiential learning and oral traditions at the forefront of her research methodology. Her desire to learn from master indigo artisans has catalyzed extensive travels across the Carolinas and West Africa.

“Those travels took me to The Gambia, Dakar (Senegal), and Ghana to see handwoven strips and country cloth: the print making of those things with stamps dipped in indigo paste,” she said. “Also, wax resistant, dye resistant, and tie and dye resist techniques that take you to the indigo vat with fabrics that are touched by so many different hands in ways that we never hear about here.”

Today, the vast majority of the clothes we purchase use a synthetic indigo process that is far removed from its origins in West Africa. The coded language that is embedded into the patina and iconic motifs that recur on traditional dyed fabrics are evidence of survival and innovation, defiance and determination to maintain one’s culture despite unimaginable colonial horrors. Textiles transcend borders and histories of erasure.

Ajanku understands this rupture and has devoted her lifework to the remembrance and rightful association of indigo traditions with African innovation and creative genius. “The intelligence that was connected to the process of indigo was hidden. It’s deemed as nonexistent. There is a lot that we are beginning to uncover. I know that my journey has only just begun.”