Talent and Vision: Artists Hone Their Craft and Sell Work at Make Studio 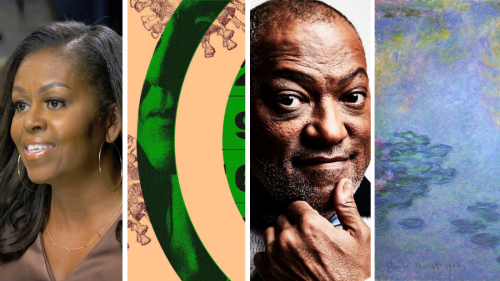 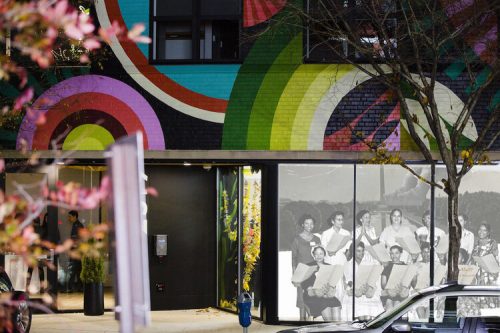 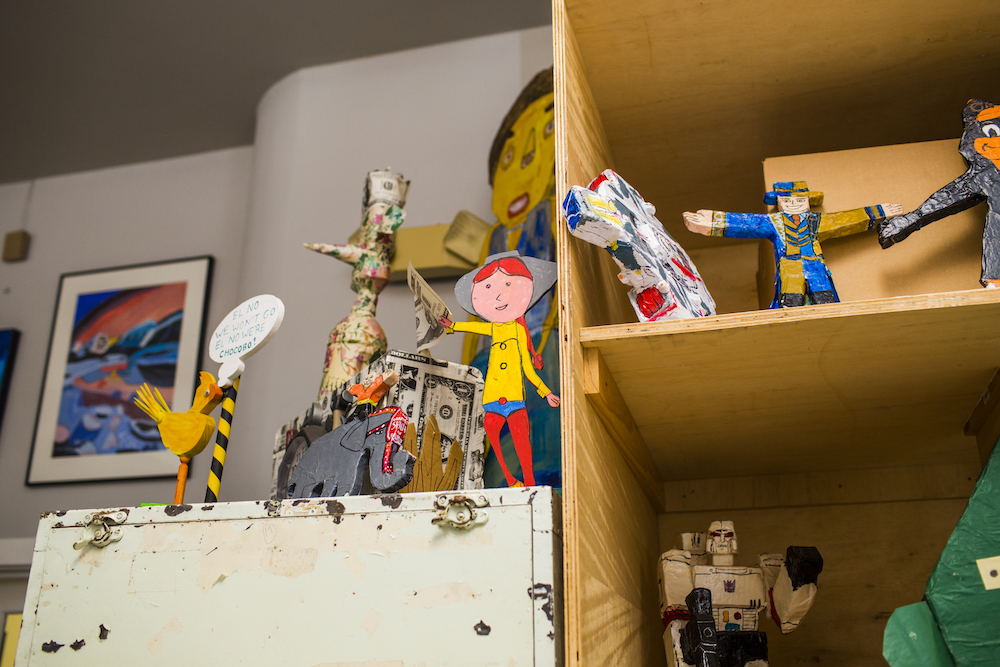 Jules Hinmon never goes a day without making his signature cardboard cutouts at Make Studio in Hampden. He takes a piece of cardboard, cuts out a character’s general shape, then fills in the details with marker and paint. He makes other work on paper, too, using watercolor, marker, or “anything to get the creative juices flowing,” he says, but these characters are his bread and butter. Varying in size and appealing to an array of buyers, Hinmon’s gestural interpretations of Shrek, the Powerpuff Girls, Charlie Brown, Sonic the Hedgehog, and others of his own creation are highly sellable.

On a late-winter morning, Hinmon made about five within an hour. “Fulfilled,” he says when asked how he feels making these cutouts, putting the finishing touches on a Pokemon. “It’s a new form of art, you know, I always like to try new things—they’re my toys of sorts.”

At Make Studio, artists are free to experiment as much as they want while honing their practice. For ten years, Make Studio has carved out studio space for artists with developmental disabilities. The strength of that artwork has helped Make Studio grow over the last decade, and the artists’ ever-increasing visibility (from Make’s partnerships with other galleries, shops, hotels, and festivals) has allowed them to sell more work—hundreds over the last decade, totaling about $120,000 and counting.

This open but focused environment offers something for everyone. The viewer, encountering work by Make Studio artists, can riffle through a rack of drawings and cycle through imagery that feels alternately serious, comical, revelatory, playful, joyful, inscrutable. According to Cathy Goucher, one of the studio’s three co-founders, artists are drawn to this place by a natural understanding of what their artwork is doing for them—it feels good to create, others appreciate it, “and they have life and a presence in whatever medium they’re using.” Sharing their work also offers the artists “a sense of bigger identity and impact” within their communities, Goucher adds. Make Studio helps strengthen these opportunities for connection.

In the late 2000s, the need for studio space for local artists with disabilities gained momentum. Running alumni groups for St. Elizabeth School, a northeast Baltimore nonpublic school for young people with disabilities, Goucher, an art therapist, realized many of her former students were developing their practices further, despite having little room to do so. She also noticed how the artists benefited from sharing their art with peers. “That became my driving interest in wanting to support getting this started, because these artists deserved and needed a place to do that work so that it could be seen and could be sold and bring them some income,” Goucher says.

Before working with Goucher at St. Elizabeth as an art therapist, Jill Scheibler had been a studio assistant at Art Enables, a progressive art studio in Washington, DC. That studio’s co-founder, Stefan Bauschmid, a graphic designer from Austria with a background in social work and disability counseling, had been working with disabled artists since the ‘90s. Scheibler asked Bauschmid to join her and Goucher to start a progressive studio in Baltimore, knowing they already had a handful of artists who were interested. Make Studio remains the only studio of its kind in Maryland.

Make Studio’s first home was a small spot in the former Load of Fun building, now the Motor House on North Avenue. The co-founders gathered art supplies, tables, and easels through donations, and implemented a fee-for-service model so that artists are paying a small amount for the studio and program. That self-generated income keeps the studio afloat along with grant funding and donations.

Resources for people with developmental disabilities vary from state to state. Most of the artists at Make Studio receive funding through Maryland’s Developmental Disabilities Administration, which they can use toward “vocationally based services,” which Make Studio offers. At a rate of about $75 per day, Make Studio artists are guaranteed a spot in the studio with art supplies included. This rate also includes the costs of framing and installation and the promotion of their art.

“The ‘art world’ can be an exclusive place where marginalized people, including those with disabilities, have less access to being recognized for their talent and vision,” says Rosie Eck, who submits artwork for local gallery shows and nationwide calls for entry as Make Studio’s programs and exhibitions associate. “Our artists make excellent work that deserves recognition. The art world is not complete if the work of artists with disabilities is not part of it.”

The art world is not complete if the work of artists with disabilities is not part of it.

Bess Lumsden joined Make Studio in its first year and has always been drawn to dark imagery and unsettling characters, especially from anime and Japanese horror, channeling her influences into highly intricate drawings and paintings. She likes exhibiting her art around the city “because I don’t have to appease other people in order to make money,” she says. “There are some times when some people say I should try something new, but they never say that I should permanently change my style.”

A central goal of progressive art studios like Make Studio is to encourage their artists’ autonomy and free, creative expression. Such studios exist internationally, but they began appearing in the United States in the 1970s, partly as a response to disability rights activists’ advocacy for more integrated, humane, community-based care for people with disabilities, rather than institutionalization.

In 1974, the psychiatrist Elias Katz and artist Florence Ludins-Katz opened the Creative Growth Center out of their garage in Oakland, California, offering studio space, materials, and professional guidance for artists with physical and developmental disabilities. Similar programs have budded across the country since then, both organically and influenced by the Ludins-Katz model. Disparate Minds, an interdisciplinary project that documents progressive art studios, says these places are philosophically integral to disability rights and social justice, and “should be considered a necessary component of any support system for [artists with disabilities]; there’s no greater way for these artists to achieve value and integration in their communities.”

Ten years in, Make Studio has grown from just one artist and an unpaid staff of three, to almost 40 member-artists and a part-time staff of six, dozens of dedicated volunteers, and a few interns per semester. After Load of Fun closed in 2012, Make Studio operated from a Woodberry studio before moving in 2015 to the Schwing Center in Hampden—their biggest space yet, with floor-to-ceiling windows into the street-level gallery. Bauschmid, the studio manager, takes the train from DC in the morning and prepares the studio for the artists, who arrive, retrieve their supplies, and quickly get to work. Staff and interns assist as needed, but most artists work independently. Some may want help measuring borders on their paper or preparing a canvas, or advice on how to tackle their next project.

In this way, artists and staff create an intuitive exchange amongst each other. In 2019, Rosie Eck, the programs and exhibitions associate, and Carolyn Shayte, a former programs associate, curated an exhibition loosely based on those circuits of influence, pairing staff art with Make Studio art. Development assistant Erin Barach chose to pair her meditative drawing with a piece by Margie Smeller. “I’ve always loved her work,” Barach says. “It’s bright, lyrical and quirky, and so beautiful. She also uses repetitive marks to create idiosyncratic, imperfect patterns in her drawings. I’m still thinking about these ideas in my work almost two years later.”

Working with artists to get their wearable art ready for the fashion show at Make Studio’s tenth-anniversary party in February, studio assistant Terri Ball asked Laura Curtis, known for her creatively hybridized characters—think domestic pets with mermaid tails—if she might work one of those mermaid creatures into her piece. “She was like boom, right onto the fabric with Sharpie and paint,” Ball says. “I’ve never seen her make a mistake.”

This courageous, all-in approach is common in the studio. Zach Manuel favors making comics featuring his characters who live in the complex kingdom of Eatiblus, where food scarcity doesn’t exist because food regrows itself. Ornate decor fills out these environments, and Manu- el’s color sensibility tends toward richness: verdant green and saturated goldenrod, plum, magenta. “When it comes to colors, I kind of try to plan them at first,” Manuel says. “That’s part of my preliminary drawings. But sometimes, in some of my abstracts, the colors just come completely by ear.”

It is from this intersection that Make Studio operates: celebrating each artists’ distinctive creativity while assisting their collective ability to share that vision with the world and be in community with one another—and hopefully earn a little money, too.

Each artist’s style and subject matter are distinctive, from Louis Middleton’s sunny portraits of celebrities who’ve died, to Dontavius Woody’s soft-surrealism, to Tony Labate’s favorite movie and TV stars, family, friends, and even Make Studio staffers drawn in his singular, impossibly spindly and boxy style. A sense of heightened stimulation runs through the art of Jerry Williams, Make Studio’s first artist, running parallel to the chaotic energy of his carnival performers and wrestlers—a sense that’s also matched by the density of his studio corner, packed with printed-out reference images and inspiration.

In the last year alone, Make Studio has partnered with Hamilton Gallery and Waller Gallery, Trohv, Atwater’s, ImpactHub, and Hotel Indigo for exhibitions. Getting this work out in the world means more opportunities for sales, of which artists take home 70 percent. In Maryland, the typical route for an adult with disabilities, after they exit the education system around age 22, involves building a reliable daily structure either on their own or with support from family or a provider. That structure often emphasizes keeping the person busy and engaged, especially through the workforce. Of course, people are worth more than their ability to work, and disability advocates have been trying to shift away from the conception of disability as a problem to solve or cure and moving toward accepting difference.

Many of these systems for neurodiverse people are typically geared toward making someone fit into a more neurotypical mode, but Scheibler has noticed a cultural shift “toward how not to stamp out the individuality of the person, yet still enable the skills that one needs to function in the world as it is.”

It is from this intersection that Make Studio operates: celebrating each of their artists’ distinctive creativity while assisting their artists’ collective ability to share that vision with the world and to be in community with one another—and hopefully earn a little money, too.

“There are so many institutional and societal hurdles that face folks with the tough sorts of disability that we most often serve,” Scheibler says, compared to artists with fewer barriers to the marketplace and art communities. “Our artists don’t need us to make their art—it’s just that we can help to overcome that other stuff, that oppressive stuff.”