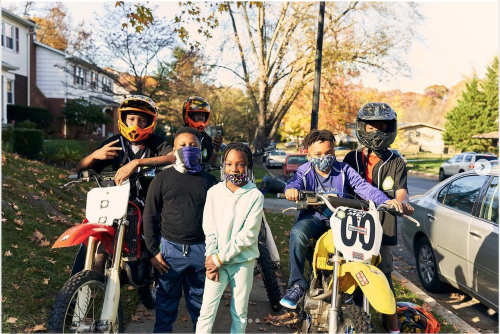 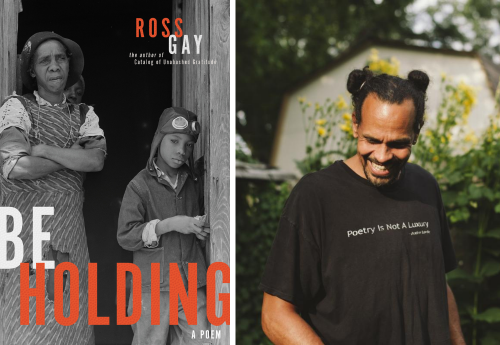 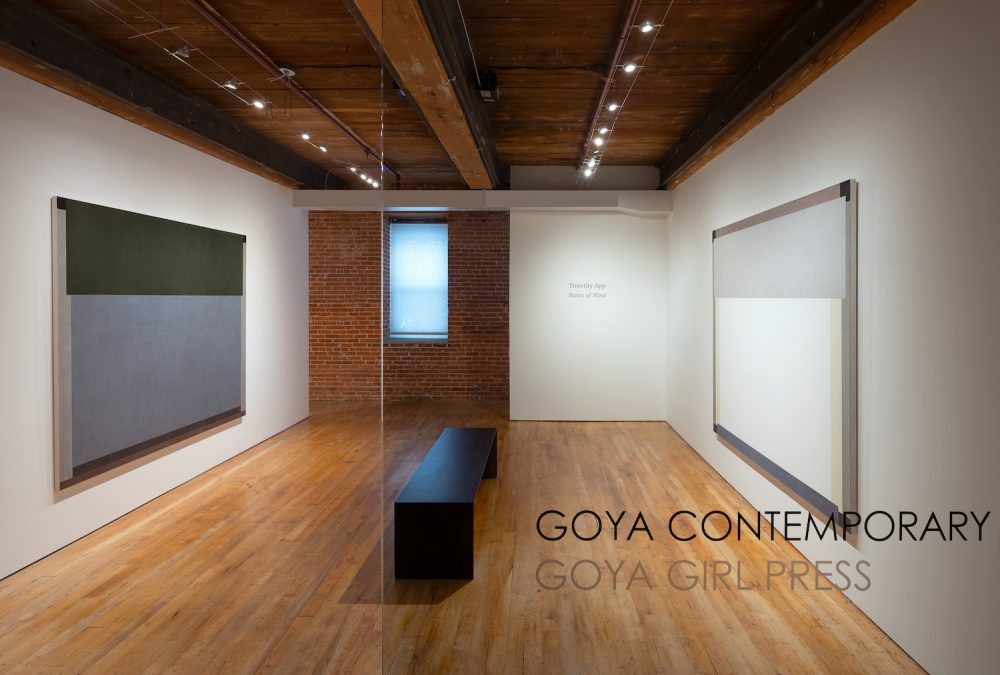 Timothy App’s States of Mind (at Goya Contemporary through March 31, by appointment) is a confident, disciplined show of recent work by an accomplished painter who has spent a full half-century exploring the possibilities inherent in hard-edged geometric abstraction. Featuring seven large canvases and six smaller works on paper, it’s a balanced, cohesive, and handsomely installed exhibition—it’s typical, in other words, of this artist’s meticulous, intentional practice.

If you’re itching for overt political content, raucous figuration, pure spontaneity, or gestural bravado, you may want to look elsewhere, but if you’re open to an art built around subdued subtlety, formal nuance, and pensive meditation, these works can reward richly. In discussing his work, App likes to allude to his lifelong attempt to find what he calls authentic ways of making a painting. This show offers an impressive display of the results of that search.

Start by spending some time with the first work in the show: “Lux Casula.” (App has always favored cryptic, polyvalent titles, which he sometimes gleans from conversations, readings, or even dictionaries—and which tend to suggest a sober erudition). Like all of the works in the show, it’s fundamentally symmetrical and features a carefully composed arrangement of precisely delineated right-angled forms. It’s large (at 72 by 72 inches) and delights in a basic tension between the planar surface of the work and implications of overlap and depth.

A massive field of off-white fills much of the canvas but is interrupted by—or obscured by, or stacked between, or adjacent to—a broad rectangle formed of a misty pumice and, along the painting’s base, an assertive strip of purplish pigeon gray. Meanwhile, smaller, denser nodes of black and brownish-green occupy the corners and feel almost like rivets; they punctuate the work, lending it a sense of architectonic logic. The overall effect is beguiling and almost musical in its marriage of structure and abstraction.

Look more closely still, and you’ll also notice a stray pencil mark or two and some subtle but distinct pooling, where App’s acrylic paints coalesced along taped lines. These aren’t signs of careless work, though. Rather, they’re evidence of a career-long fascination with systematic, almost rule-bound approaches to making and with the unruly fluidity of suspended pigments. In the studio, App places his canvases horizontally on sawhorses and applies paints and glazes in a deliberate fashion, largely but not entirely repressing evidence of his hand. And so “Lux Casula” features, at once, the confident despotism of line and the ungovernable osmosis of color. It’s a painting that delimits and restrains, while also acknowledging the limits of what can be controlled.

Not far away hangs “Cloister,” a daunting work completed in 2018. It’s dominated by a massive black rectangle, a pure visual void. Throughout the show, App deploys black masterfully: At times, he uses the color to convey a sense of solid opacity, while in other instances it can suggest infinite depth or a sense of sublimity. Here, the black is paired with a looming slab built out of closely related grays; there are hints of gravel, battleship gray, and—appropriately, given the work’s title—a tone sometimes called abbey gray. But the word cloister can evoke a range of associations, and App seems to value such open-endedness. The articulated geometry of the painting suggests an almost monastic clarity, and the reductive compositional scheme and strict tonal divisions reminded me of the strictness of monastic cells and the purity of plainsong. Again, though, discipline alone is merely part of a larger arc, and in returning to the yawning expanse of black we can intuit its intended end: revelation.

Although this is a modestly scaled show, it is intelligently curated by Amy Eva Raehse, and moving through it involves a recurring passage between darker, heavier works and lighter, more open ones. The final room is defined by the appealing “Predella,” painted in 2020. In art historical terminology, a predella is the base of an altarpiece; again, we sense a concurrent interest in the architectural and the spiritual.

And again, we can observe App’s tendency to toggle between solid referents and pure form: Is the block of Oslo gray near the base a stone support for a sacred panel? Or is it a mere exercise in abstract color? It’s both, of course, and it thus extends a tendency that curator Kristen Hileman once noted in App’s earlier paintings, which often quietly alluded to theatrical forms (stages, proscenia, curtains…) even as they resisted literal representation. In this sense, it’s meaningful that we can clearly discern, in the same field of gray, the loosely perpendicular back-and-forth of App’s brush, and hints of underlying colors. This is nothing but paint, App seems to say—and yet it’s also something more.

The six large paintings thrive in Goya’s galleries; they confidently hold the walls. And what of the six smaller works? Framed, and featuring a good deal of blank paper, they produce a rather different effect. They’re undeniably more intimate: more objects, you might say, and fewer open-ended invitations. Nevertheless, they clearly also belong, as they rely on the same formal vocabulary and principles that power their larger counterparts. In “Untitled XXIV,” for example, two dominant rectangular forms and a lapidary palette yield a sturdy, rigorous aspect. Given their scale, it’s tempting to see the works on paper as studies. But there’s nothing impetuous or tentative about them. Rather, they’re also products of a focused process of inquiry and application, and are finished works in their own right. The show coheres and impresses through its coherence: there’s not a single failure in the batch.

Among other things, the show is a potent display of what can be achieved through a restrictive approach. For this is a reductive series of works: App has eliminated the dynamic curves that coursed through many of the works that he executed in the early 2000s, and there’s little trace of the solid, buoyant colors that he featured in earlier series. Instead, the artist intentionally limits himself to a simple set of forms and a foggy, earthy palette that elicits the bleak landscapes of Caspar David Friedrich. To be sure, App has explored terrain something like this before, in his Zone series, in the 1970s, and in some of his more recent Threshold paintings. And perhaps it’s no surprise that he has repeatedly gravitated toward such an approach, for it seems to constitute, in his view, a sort of moral paradigm. In a series of short, philosophical statements in the accompanying materials, App repeatedly emphasizes the value of discipline, and speculates that this focused style offers “a model for ethical human behavior.”

That’s a large claim, but it’s not an arbitrary one—and it’s a reminder that App’s practice is deeply informed by a long history of North Atlantic modernism. Elements of that history relevant to App’s practice include the utopian philosophies of the Suprematists, the esoteric tendencies of Piet Mondrian, the systematic rigor of Josef Albers, the luminous spirituality of Mark Rothko, and the spare order of Minimalism. At times, too, App has spoken of Agnes Martin’s emphasis upon fleeting moments of perfection. It’s a substantial list of influences, to be sure, but it’s united by a shared sense of the larger potential of art: a sense that comes across in App’s further claim that “any human endeavor seeking dynamic resolution of disparate and conflicting elements […] is a potent analogy for the constructive and peaceful resolution of any and all human conflict.” Painting, here, is positioned as a template for virtuous action: a means to a much larger, and emphatically more concrete, end.

Ultimately, viewers will decide for themselves how compelling they find such ideas, which can read as rather jarring in the wake of the extreme roil and turbulence of the past year. I’ll admit that I paused at App’s related assertion that “matters of social and political relevance have become inconsequential to my labors as an artist.” Given that he was a student at Kent State during the 1970 shootings, it’s a surprising claim. It reads at once like a blithe abnegation of the social sphere and a naive claim rooted in considerable privilege—for not every artist, of course, can simply decide to turn their back on the world at large.

And yet, as a global pandemic drags on, there stand the paintings: resolute testimonies to a process of systematic rumination and inquiry. A few months ago, the New York Times reported on the monastic community of Chartreuse, which has practiced an ascetic form of isolation in the French Alps for more than 900 years, and has barely been affected by the Covid-19 pandemic. Stat crux dum volvitur orbis is their motto: the cross is steady while the world turns. One senses that App, with his fondness for Latin, cloisters, and an almost monastic dedication to his practice, can relate.