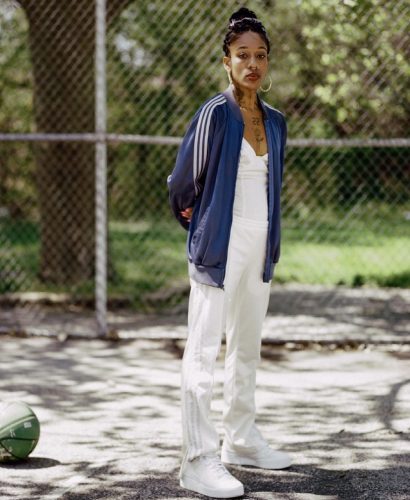 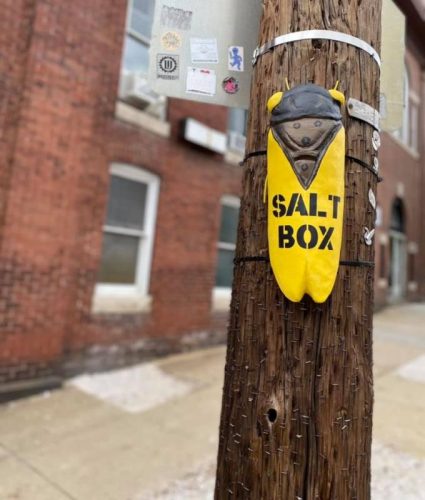 The News: Masks Off Maryland (Including Baltimore [...] 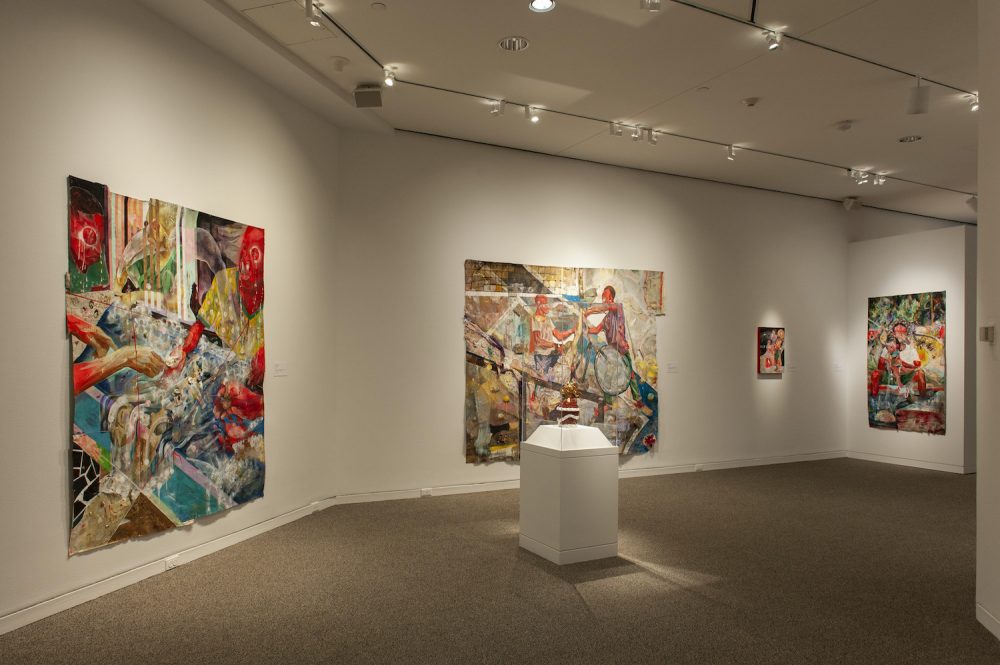 In Lavar Munroe’s painting “Two Birds and a Stone,” a man, glowing red, stands thigh-deep in water, seemingly unfazed by the huge snake floating before him. Trappings of the holy and the ordinary shape the central figure. A golden halo, faint wings, and his upright stature (while wielding two macaws in either hand) give him a saintlike aura. His basketball shorts and party hat bring him back into the material world, along with the nylon strap stretching across his chest and holding an actual mousetrap and a sentimental plaster angel ornament like mundane, protective amulets.

Many of the objects that Munroe embeds throughout his mixed-media paintings previously belonged to family members—the nylon harnesses that recur in many of these works, in particular, belonged to his father, a Bahamian parasailing instructor who died in 2015. Repurposing these objects in his accumulative, allegorical paintings allows Munroe to contend with and remain connected with the people close to him who have passed away.

Born and raised in Nassau, Munroe now lives and works in Baltimore. He uses images from specific memories, symbols, and materials in his work to tell stories and examine relationships to people, spiritual beliefs, and cultural markers that have shaped him. In this collection of work on view in the Sondheim Finalist exhibition at the Walters Art Museum, Munroe focuses on his relationship to Black single fatherhood—through his father, who raised him alone, and his own role as a single father. There’s nothing singular about that subject for him; the works branch out and then reconnect widely, intimately.

Though this work is largely culled from the artist’s life, it is not autobiographical at the expense of forging a real connection to the viewer. The individual works play off one another through repeated use of those nylon straps, mousetraps, jewelry, and ornaments; recurrent symbols like birds, snakes, and water abound, carrying a wealth of mythical and scriptural connotations. The works also stand apart, and many objects in use remain ultimately ambiguous, such as what appears to be pill capsules that were pressed into the paint in “Two Birds” and then removed, leaving their indelible impression of help or harm.

These ambiguities create openings for the viewer, who is bound to see this vulnerable work through their own experiences and histories. The way certain materials and imagery emerge and disappear throughout Munroe’s work reminds me that the dead follow us. Through dreams, familiar energies, and objects that hold memories, people who have passed can reappear like surprise guests in encounters that can comfort, worry, or teach us.

Each of Munroe’s paintings is loaded with a jumble of legible scenes, forms, and figures as well as ethereal and abstract motifs. In the large “Bathwater,” four or five figures preside over/around a bathtub, creating a scene that feels like a site for both a ritual and a game. It isn’t clear who or what is being washed: The tub overflows with a pretty mess of sudsy brushstrokes and gobs of paint, while two hands meet in the middle to exchange money for a baggie of white stuff. Over the water, the person on the left appears to be making some physical transition: a red arm fades into a pale hand.

Tears leak from the eyes of the person on the other end of this exchange and from a stoic kid in the corner. Ghostly limbs surround them all and another set of disembodied hands joins them. Straight red lines divide the composition geometrically, but they also connect the figures. Lines point from one person’s chest to another out-of-view figure; another line comes from a small, almost hidden figure (who vaguely resembles some ancient colonizer/settler) to the foreground, directly involving you—me—the viewer as we speculate upon this whole scene.

The spaces and figures in Munroe’s scenes are realistic enough to suggest that they were perhaps drawn from life or photographs. His knack for figure drawing and quote-unquote realism is evident and appreciated, especially as a counterpoint to the abstraction and invention that form the environs. The scenes are also distorted and dreamlike, and Munroe knows just when to stop and let the material do the work, like deciding a small chunk of white paint is enough to describe a scoop of ice cream held by a little girl, or incorporating an actual button-down shirt, instead of recreating it with line and color.

That shirt appears in the altar-like piece “FAITH, HOPE & LOVE,” which depicts a couple posing with a young child who appears caught mid-sneeze. It’s a touching, candid moment amid all the markers of death encroaching upon the scene. Sepulchral crucifixes gather around their feet, and the phrase “gone but not forgotten,” seemingly ripped from a memorial T-shirt, hangs at the bottom like a title plaque. And at first I hardly noticed this moment: As a gesture of protection, the mother holds a machete in front of the child; she herself is armed with a Bible tucked into her garter. Other nearby symbols, such as a broken mirror or a golden bird-fetus floating over her belly, seem like threats or premonitions. The father, standing sturdy behind them, has his arms around both his son and his partner. The three of them function as structural anchors amid a turbulent setting.

The most spiritually wrenching piece in this exhibit is also the only sculpture in Munroe’s exhibit: a glossy, red-and-gold urn the artist made out of clay displayed under a vitrine. Wall text reveals that it holds the cremated remains of his father, whose influence throughout this art is both emotionally and materially palpable. Surrounded by largely two-dimensional narrative paintings, I feel unsure how to regard this functional ceramic vessel that holds the earthly part of what this person left behind in death—a snap to reality amid an exhibit suffused with allegory and symbol.

Death is so literal, so absolute, and yet so abstract and unbelievable. The question of what exactly happens after we die is unknowable but, as Munroe demonstrates, we can trace the ways someone else shaped our life and we can track the impact of their absence. The urn, created in 2016 and marked on the wall label as “ongoing,” is a profound way for the artist to include his father on this journey, and to honor his contributions to the abundant complexity and sacred beauty in the thick and accumulative paintings that surround them.

Photos courtesy of the Walters Art Museum and by Cara Ober