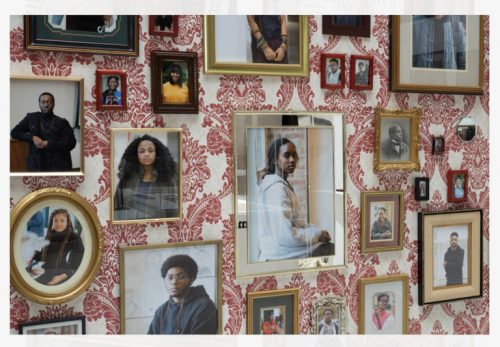 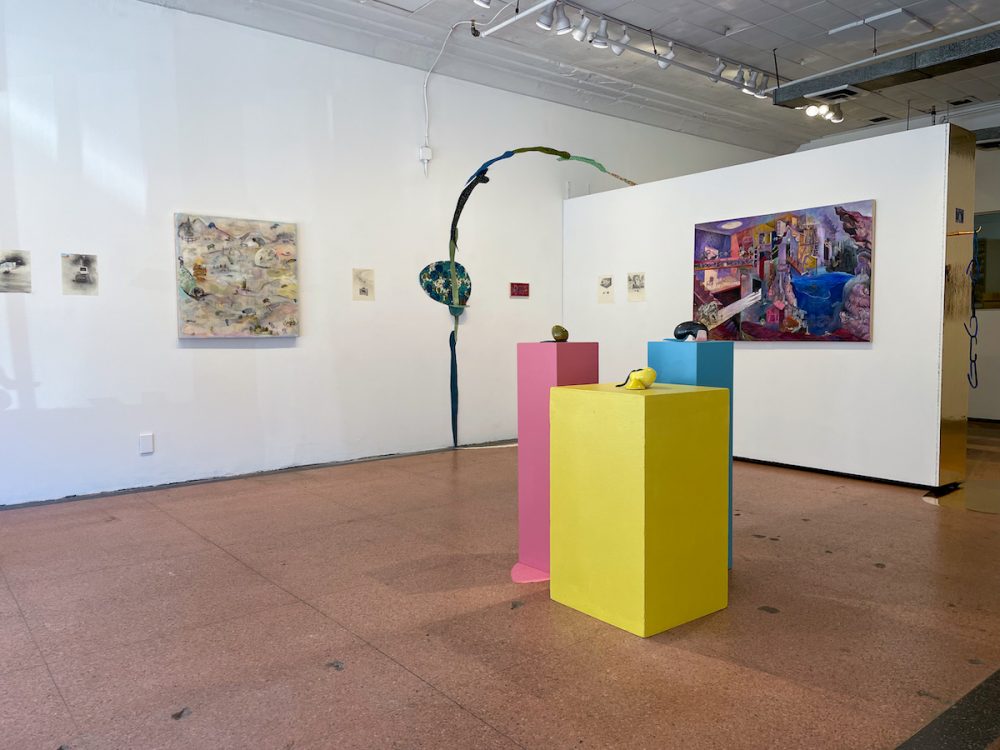 From afar, the alluring bright colors and forms on display seem inviting, but on closer inspection I notice that characters are missing heads, the landscape doesn’t abide by the laws of physics, or there is a hint of the supernatural. Morphing between dream, nightmare, and meditation, the drawings, collages, and sculptures transport the viewer to different realms. With an armed crisis in Europe, and uncertainty in the air from rising inflation and a never-ending pandemic, having surreal, unexpected, and strange landscapes to escape into and decipher can offer a moment of respite and contemplation.

I interpreted Dorman’s “Vessels” as a reflection on the pandemic as a grotesque nightmare. A humanoid creature, with a scooped-out face revealing layers of flesh, is submerged to the shoulders in murky pink water, surrounded by a menagerie of eerie parasitic creatures, part root vegetable and part vessel. These critters are vessels (some quite literally) just as humans are vessels for stories, consciousness, bacteria, and viruses. The painting’s landscape appears alien with its dark reddish-black sky, but its scene of invasion and infection feels all too familiar. The pandemic has taught us that we are porous membranes intricately connected in a web.

Our interaction with non-human creatures and sensations is significant, and it appears as a philosophical musing in Barber’s works, whose lengthy, poetic titles enrich her simplified forms beyond what they initially seem to be. A small pink sculpture on a dark blue plinth, for example, has the title: “to listen, inset your whole body into the sound. wriggle your body into the tight warm sound and bask in your thick porosity. myriad small concessions. the endless in and out of these long days, rosy with waning light.”

The sculpture is geometric with four sides reaching toward a lopsided pinnacle. But it is also soft and undulating like a body, and its surface is oily like a forehead after a hot summer day. A worm or snake slithers out of it, stirring up intense, uneasy curiosity. Almost immediately, parasites in my own body come to mind; hundreds of dust mites wriggle on my face and my gut biome is thriving with a universe of microscopic creatures. The work asks us to fully engage our senses as our body perceives more than we are consciously aware of. The intertwining images of pushing one’s body into a sound and the referenced twilight feel raw, reminding me of Rafael Lozano-Hemmer’s immersive “Pulse,” an audiovisual installation of viewers’ heartbeats in a dimly lit hall that I experienced at the Hirshhorn. Like “Pulse,” Barber’s sculpture calls to mind those ordinary bodily sounds: the pulse that you feel in your ear late at night, stomach growls, or intestine croaks—the sometimes uncomfortable reminders of being alive.

A symbolic representation of birth begins the fractured story in David’s “Tear Film,” a small charcoal and colored pencil drawing of a scenic triptych. A woman swims up to an implied surface, and above her, an angel proceeds into an abode, a potential representation of birth and ascension. A tumultuous scene unfolds underneath two snakes in the central panel: three women in long dark skirts ominously stand in front of a burning house, a symbol of destruction with the possibility of rebirth, and in the sky above, a helicopter flies upside-down. The right panel has a large eye with seven palms underneath it, and teardrops above; in the scene below, a simplified figure lies on the ground next to a trap door, presumably dead. Birth and death, with chaos in between.

Like a triptych, the tear film, a multi-layered part of the eye in front of the cornea, has three parts: a water layer, an oily layer, and a mucous layer. The eye is one of our crucial sensory organs, yet it can also be a metaphor for God’s eye or the surveillance system that presides over modern society. Oil, water, and fire are also embodiments of the Holy Spirit. The small drawing functions with its own internal logic and David weaves a fragmented story layered with both religious symbolism and motifs of mundane life. The way David’s image is structured with symbols is reminiscent of Natty Boh beer cap puzzles, and there is a temptation here to figure it all out, but that is not a necessity to enjoy the drawings.

Iconographic symbolism enters other works too, like Dorman’s “Abomination,” a chaotic scene of death and destruction. A cross-section of Earth contains animal skeletons; miners claw through the soil to leave a bloody wound, and animals tumble off conveyor belts. Abomination, a word that in religious contexts refers to inherently sinful things and unclean animals, suggests that our actions toward Earth are loathsome. The collage painting is a possible premonition about humanity’s future: a manufactured mass extinction where our own habits lead to our demise.

On the other hand, Barber’s yellow wall-hanging fabric and ceramic sculpture feels less apocalyptic and more meditative, and it is titled: “sun and imitation sun pressed into the undergarments of nuns and monks and the holy unnamed. these so dedicated. perfumed like stately accompaniment towards the always ending. the always reflecting indifference of objects’ conatus. always carving into the light falling through the leaking skylight. always pressing against what is also you, rubbing, being. being a weight. mercurial. being distinctly aware of what can be saved, what can be shown, what can be placed for offering. placed upon the sun like your father’s favorite song. burning.”

The yellow ceramic shelf is a circular slab bent at 90 degrees and holds three shiny rock-shaped ceramics. Partially behind the shelf are two circles and a snake-shaped fabric cut-out, unhemmed and delicately held to the wall with t-pins. One of the circles and the snake have patterns reminiscent of fig leaves. The other circle is dyed a vibrant yellow: one sun and one imitation sun. Contrary to the common religious reading of a snake as evil, the creature can also represent renewal, rebirth, and immortality. This snake feels like the latter, since the yellow imbues the work with warmth. Clay is of the earth and it has been transformed into a firm, glossy form that holds objects that feel like offerings. The pensive title paints an extended visual image and story. Light is life as it nourishes plants and crops. What does this work offer us? An opportunity to ponder a presence in our life. And in return, what do we offer to our Earth?

Humanity is at a threshold where it is necessary to rethink modes of connection and existence. How do we make our world more habitable and equitable? How can we sustainably live with other life forms? Barber, David, and Dorman transport me to fictitious and prophetic scenarios of apocalypses and hopeful futures that suspend my disbelief and immerse me in surreal realms. While Dorman depicts beautiful yet nightmarish scenes, Barber offers ruminations on human sensation and connection, and David creates cryptic riddles with historical and pop culture references. This metamorphosis of narrative, interpretation, and beings suggests a cross-pollination between all things and the instability of systems. I keep returning to the word porous as I think of Dorman’s “Vessels” and Barber’s pink sculpture. We must become fluid and adaptable individuals affected by our reality, morphing to mend hazardous relationships with ourselves and our Earth.

Early Blossoms/Perilous Thirds closes on May 8 with an artist talk and a closing reception.