Reflecting on (and in) Yayoi Kusama at the Hirshhorn 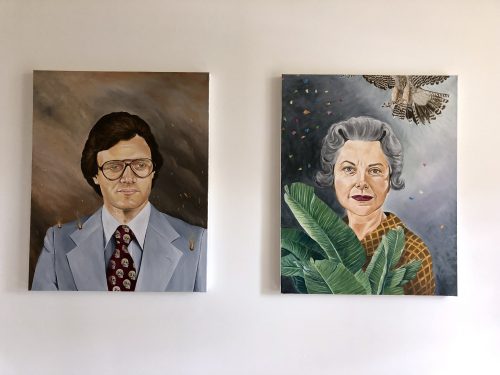 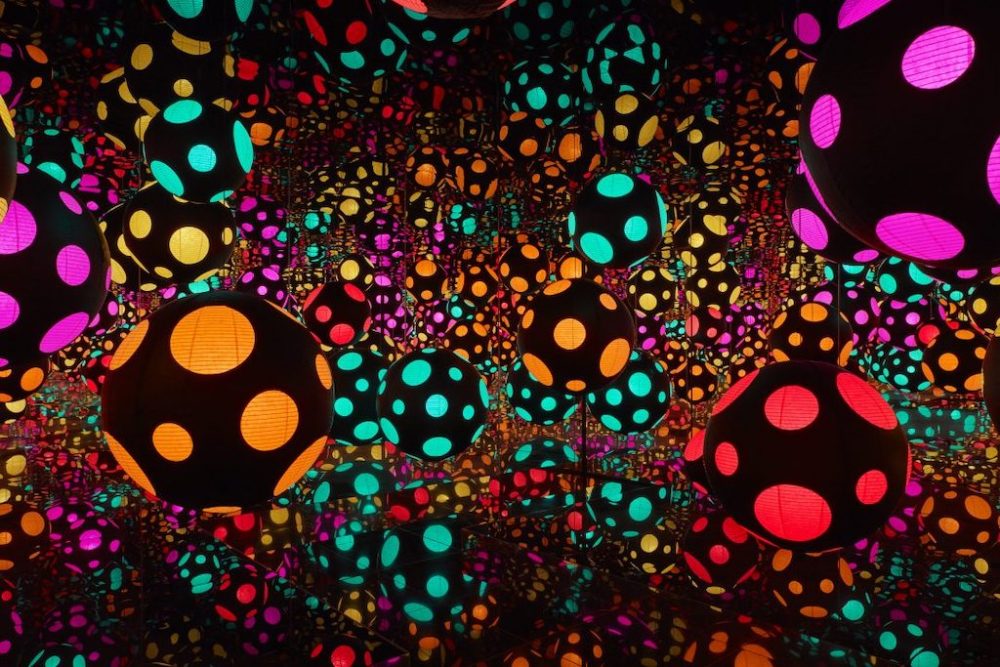 After a two-year, Covid-related delay, One With Eternity, featuring five works by the beloved nonagenarian Yayoi Kusama, is now open at the Hirshhorn. And while the dazzling interiors of the two mirrored rooms on display will almost certainly be greeted by a riot of clicks, pics, and shares, this concise show isn’t merely empty spectacle. Look patiently, and you’ll be rewarded by real depth underneath the reflective surfaces.

“We anticipate,” the Hirshhorn states on its website, “that this will be a popular experience.” Well, that seems like a fair bet. In 2017, when the museum last undertook a show of Kusama’s work, an astounding 160,000 visitors turned out over 81 days (and the hashtag #InfiniteKusama turned up in more than 172 million Twitter and Instagram accounts). Prompted by that outpouring of interest, the Hirshhorn has since acquired three sizable works by the artist—and now it’s out to share them, by means of a free, timed-pass system that’s designed to keep the expected crowds manageable.

What to expect, then, if you do score a pass? Physically, this is a spare show. Staged in the museum’s basement, it features several largely empty spaces: an attempt, presumably, to allow some degree of social distancing. But there’s a subtler curatorial logic at work, as well. As assistant curator Betsy Johnson put it at a media preview, “one of the things we wanted to do was to focus a little bit more on her life and her biography.” Such a focus is clearest in the substantial timeline that spreads across two walls of an opening room, offering a fine-grained account of an artistic career that spans more than 70 years.

That arc is then illustrated in the five works on display, which comprise a tidy summary of Kusama’s evolving practice. Indeed, several of her abiding interests are already implicit in The Hill, 1953 A (No. 30) a small painting executed shortly after her first solo show. A swarm of stippled dots partially obscures a central band that features six wobbly lines comprised of wedge-like forms, which meander across the composition.

Evoking both a quiet, nocturnal landscape and an enlargement of a capillary or a tree’s fibrous cell, the painting thus suggests two irreconcilable scales. Moreover, while the irregular dots and triangles embody a tender handmadeness, they also speak to the artist’s effort to process her anxiety and recurring psychotic episodes through sheer repetition: a tactic that would soon become central to Kusama’s practice.

In the next room, Pumpkin, a 2016 piece, represents the maturation of those ideas. During a childhood trip to a seed-harvesting ground, Kusama was apparently struck by what she would later call the “solid spiritual balance” of a pumpkin; this sizable piece is one in a series of subsequent odes to the fruit. It’s also, though, a charming riff on the dour seriousness of Minimalist works. Like, say, Walter De Maria’s Cage II, Pumpkin is slightly taller than us and it sits directly on the gallery floor, in the middle of the room. Precisely applied rows of acrylic dots line its folds, in an exacting geometry. But the emphatically representational aspect, the softly organic curves, and the vibrant yellow-orange combine to create an endearing energy: something closer to Totero than Tony Smith.

Drift through the subsequent transitional space (which features a modest slide show and a forgettable inspirational poem that Kusama penned in the early days of Covid), and you arrive at the first infinity mirror room. Step inside the brightly lit, windowless container, and you’re surrounded by a bevy of handsewn tubular forms covered in red polka dots and reflected in the room’s mirrored walls.

Are those phallic forms disturbing symbols of masculine aggression? intimate products of craft and care? Critical reactions have varied. Regardless, the power of the space primarily resides in the relationship between the idea of self-obliteration and the use of mirrored repetition. As we see our own image multiplied, our very sense of self is eroded: a familiar tension, perhaps, in this era of virtual reproduction and self-promotion.

The second mirrored room, a 2018 piece, is even more disorienting. A barely discernible path leads through a black interior that’s lit only by the ebbing tones of 22 globes filled with colored electric lights. The reflective walls and floor combine with the evolving light to yield an effect that’s simultaneously psychedelic, kitschy, and deeply affecting: it’s like standing inside a combination of a velvet painting and a lava lamp. A hushed quiet only intensifies the phenomenological edge. And so, while you may be unable to clearly see your body in the dark, you’ll nevertheless be unusually aware of your body as you carefully navigate between the suspended orbs.

Bodily presence and absence are also central to the final work in the show, a painted jacket from 1964. At an early age, Kusama began to experience occasional hallucinations, and one of her earliest involved an expanding floral pattern than seemed to subsume her entire environment. Here, she offers a concrete variation on that vision, covering a cloth overcoat in plastic flowers, and then painting it a metallic bronze. The result, which reads as simultaneously soft and hard, is surprisingly affecting, and seems to have prompted Claes Oldenburg to experiment in comparable directions. It also recalls earlier Safavid coats (whose floral forms are made of metallic threads) and Botticelli’s Flora (who wears both woven and actual flowers). Connections, then, abound. But this garment, of course, is empty—and so the show ends with yet another variation on self-obliteration.

Inevitably, there are other things that are missing, as well, in this compressed survey. There’s only a brief textual reference, for instance, to the infinite net paintings that Kusama executed in the late 1950s; the actual works are elsewhere. Similarly, you’ll have to content yourself with descriptions and photographs of the immersive environments and happenings that she designed during a wildly prolific period in the 1960s. But this show’s goal isn’t comprehensiveness. Rather, it’s governed by a celebratory spirit: a pride in the Hirshhorn’s growing collection of work by an artist whose appeal is remarkably broad.

Of course, such fame can inspire cynicism—especially in an artworld that’s wary of populist appeal and slick promotional machinery. Look closely, and you’ll notice that this show was partially funded by Veuve Clicquot, the high-end Champagne house for whom Kusama designed a case and bottle in 2012. We’re uncomfortably close, here, to the baldly commercial territory plied by Michael Graves and Jeff Koons. And then, too, there’s the blurred line between art gallery and entertainment facility. Alex Kitnick recently referred, in Artforum, to the “Kusama-esque art-experience-scape we inhabit today,” and it’s true that the line between the vibrant, dotted walls that surround Pumpkin and the projected images of the many immersive Van Gogh projects is a faint one, at best.

Ultimately, though, Kusama’s work is distinguished by a concurrent savviness and sincerity. Way back in 1966, she found herself in hot water with the organizers of the Venice Biennale, where she was marketing 1,500 reflective “narcissus balls” for two dollars apiece, on the Giardini grounds. The gesture was too frank, apparently, in its bald allusions to the artworld’s self-regard and crassly commercial tendencies. But a half century on, in a very different era of selfies and NFTs, her implicit message still feels entirely relevant. And, as this show will likely demonstrate, we’re still buying what she’s selling.