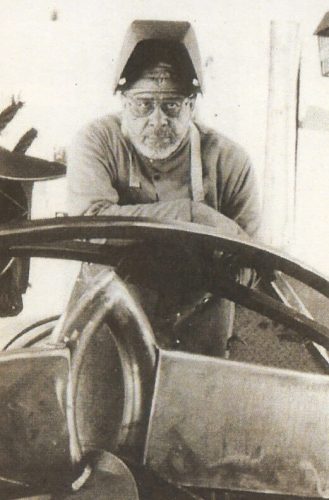 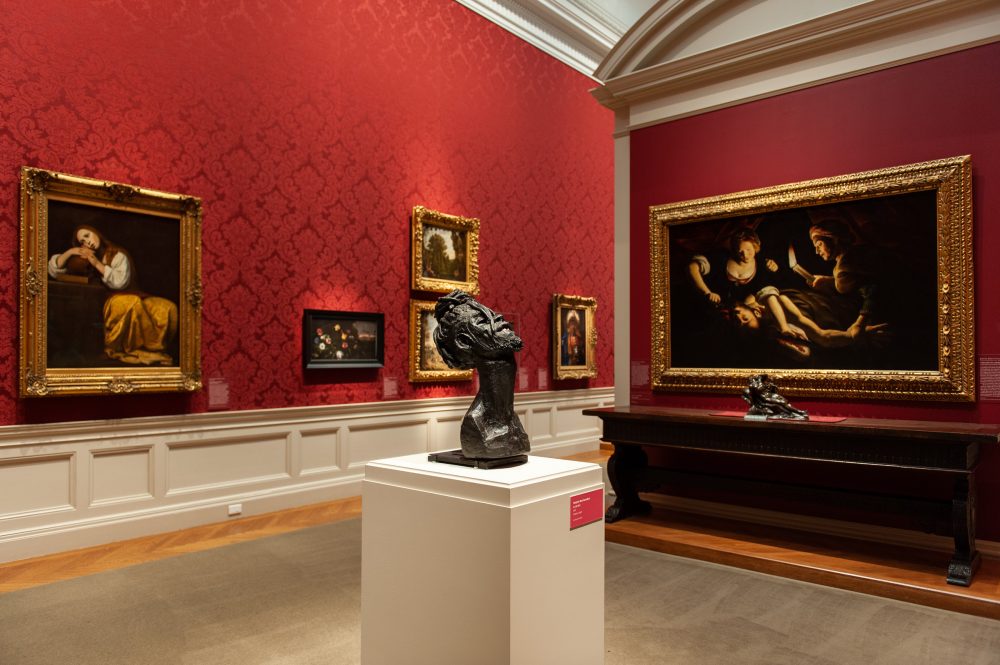 The effect is initially subtle, but it’s surprisingly affecting: there, among the Walters’ staid parade of Italian Renaissance altarpieces and solemn saints, a new addition looks meaningfully out at us. Set against a background of glowing copper leaf, a young Black man offers a bottle of milk and a jar of honey. It’s a work that evokes both an ancient, Biblical sense of surfeit and—when we read its title, Are You Being Served?—a frank skepticism about the American project and its ability to provide for all of its residents, regardless of race.

Created by Stephen Towns in 2014, the painting is the first of six contemporary artworks (five of which are by Maryland-based artists) currently installed among the museum’s Renaissance and Baroque objects. Curated by Joaneath Spicer with assistance from Chandi Kelley, and entitled Activating the Renaissance, this modest but intelligent exhibition smoothly achieves its stated aim. The juxtapositions suggest a range of partial parallels and meaningful differences, centuries-old works read in new ways, and the additions offer a meaty, if occasionally uneven, sampler of recent artistic experiments.

Does all of this ring a bell? It might well. Back in 1995, Spicer co-curated (with Lisa Corrin) Going for Baroque, which also involved a juxtaposition of works by contemporary artists and Old Masters. Admittedly, that show was larger in scope; it involved 18 practicing artists, including Frank Stella and Cindy Sherman, and was accompanied by a catalogue. This year’s iteration is leaner, but it also aims to enliven the Walters’ European holdings and to make them feel newly relevant. The goal, as George Ciscle put it in the 1995 catalog, is still to put works “in conversation so the objects can illuminate one another and draw out aspects of each which otherwise might go unconsidered.”

Something like that undeniably takes place in the first room of the show. Flanked by ranks of Quattrocento holy figures, Towns’ protagonist feels at once at home and strikingly distinct. In one sense, his lively gesture and his focused gaze position him as the heir of what John Shearman once called a developing interactivity, or transitivity, in Italian Renaissance art. A bit like Correggio’s Pontius Pilate, who turns inquiringly towards us and seeks our counsel, this man actively involves us, waiting for our response.

The reverent tenor of the adjacent Renaissance altarpieces rubs off on him, too. His gesture feels almost eucharistic, and his method of lifting the tray gives way to a more abstract sense of spiritual uplift. And yet, this is neither priest nor saint, and his value is not predicated upon martyrdom or miracles; rather, his worth is taken for granted, even as the ability of American society to treat its marginalized fairly is thrown into question. Thus, the declarative and dogmatic imagery of the 15th century give way to something more provisional and open-ended, and the certain promise of heaven yields to the contested form of this unequal world.

A roughly similar combination of dignity and uncertainty is discernible in the central pair of figures in Jessica Bastidas’ nearby Tears of the Black Madonna, a 2021 oil painting framed in salvaged wood. Against an agitated jumble of harsh diagonals, inverted texts, and industrial surfaces, a brown-skinned young person carries a child piggyback. Are these siblings? Refugees? We’re not sure—but the worried tone of their divergent gazes is softened slightly by a sketchy evocation of the Virgin of Guadalupe, who seems to watch over them.

In an accompanying statement (each work is flanked by a pink placard featuring paragraph-long texts by Spicer and the artist), Bastidas alludes to her fascination with the ways in which images of the Virgin have migrated from church settings to the streets. In that sense, the placement of her work next to an exquisite panel painting of Mary and Jesus by Filippo Lippi is deeply revealing, as the courtly calm and soft curves of Lippi’s image give way to something rawer and more gestural in Bastidas’ painting. Look closely, though, and subtle parallels emerge: Lippi’s stella maris is loosely echoed in a Nike swoop, and both works feature prominent bands of text. Altar and alley, it seems, are not entirely remote from one another.

Arguably, the most extraordinary pairing in the entire show involves the placement of Tawny Chatmon’s haunting Covered/Vienna? next to an enigmatic oil painting by Pontormo. Both works are dual portraits, and both pair a coolly confident adult woman—embodiments, really, of sprezzatura— with a girl in a hesitant pose. And both foreground racial identity: Chatmon’s work celebrates Black elegance and love, while Pontormo’s is apparently the first formal European portrait of a child of African ancestry.

But the differences between the two works are pronounced, as well. Where Pontormo relies heavily upon his figures’ communicative hands, Chatmon largely cloaks her figures, whose hands are concealed. And where Pontormo uses a muted palette to hint at chaste restraint, Chatmon generates a luscious richness via vivid swirls of gold paint, velvety black, and a wild, gaudy frame. In the end, though, these differences do not erode a partially shared sense of protective caution. As one mother wraps her Black child against the barbs of a racist environment, the other offers a subtle guidance in the vindictive landscape of Florentine politics.

A sleek staged photograph by the Brooklyn-based conceptual artist Ventiko marks the turn into the second half of the show: an area characterized by Baroque tendencies—and, in my view, by weaker correspondences and less riveting dialogue between works. That’s not to say that Ventiko’s work, which surrounds an intricately posed pair of figures in heavy chiaroscuro and vanitas motifs (think severed pig’s head), is uninteresting. But the points of contact between it and the painting of Adam and Eve by Pietro Mora, above, seem largely superficial.

Sure, both works use gesture expressively, and both include a moralizing dimension. Really, though, it’s probably more rewarding to compare Ventiko’s work—in which the artist appears quite prominently—with the photography of Yasumasa Morimura, which was included in 1995’s Going for Baroque. Both photographers are centrally interested in notions of identity and gender fluidity, in the relationship between their art and painting, and in using self-portraiture to inhabit and test the limits of European art history.

Testing those limits is also central to the practice of Murjoni Merriweather, who voices an interest in contesting European beauty standards and in normalizing Black culture and beauty. Here, she contributes a powerful ceramic bust of a Black man, which is placed emphatically in the center of a gallery filled with Baroque paintings. Larger than life, head tilted back and framed in a dramatic spill of dreads, and wearing a languid smile filled with gold grills, the figure oozes self-confidence as he easily holds the room.

But the curatorial logic at work here is fuzzy. What is intended in the decision to place Merriweather’s bodiless bust near two paintings that explicitly depict decapitations? Surely her figure is not meant to be seen as a second Holofernes, who embodied violence and pride-–and yet the formal parallels here are hard to ignore. Also confusing is the accompanying label’s claim that depictions of pleasure and satisfaction were rare in Baroque art. What of Bernini’s Saint Teresa, who famously swoons and parts her lips in a similarly sensuous pose? Or, for that matter, Pietro Rotari’s Young Russian Woman, a coy Baroque work that hangs in a different gallery of the Walters? But it goes entirely unaddressed here, missing a chance for meaningful conversation.

The final pairing in the show is, happily, much tighter and more effective. Of course, that’s due largely to the fact that Bernhard Hildebrandt’s photograph is a direct response to Tiepolo’s large and magnetic Scipio Africanus Freeing Massiva, which stands several dozen feet away. But Hildebrandt’s work, which was made last year, is no mere reproduction. Instead, it crops and blurs Tiepolo’s work, complicating our relationship to both the pictured event and the original painting. This is art, then, that is centrally about art rather than identity, and that offers an effective visualization of the opacity of time, history, and artistic convention—and of the impossibility of ever perceiving a familiar icon entirely clearly.

And so it serves, too, as an apt conclusion to a show that manages to suggest new ways of thinking about the Walters’ well-known collection. Writing in 1995 about Going for Baroque, a rather dyspeptic Paul Richard concluded that “The old guys win hands down. They win in terms of hard-won skills. … And they win in terms of the freedom of their visual thinking.” Instead of thinking in terms of simple competition, though, it may be more rewarding to view Activating the Renaissance as something like a scattering of bright wildflowers in a noble, old-growth forest. Lively and diverse, the works in this show testify to the engagingly fecund potential of the juxtaposition of old and new.