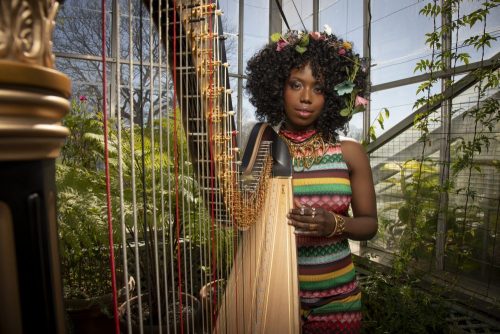 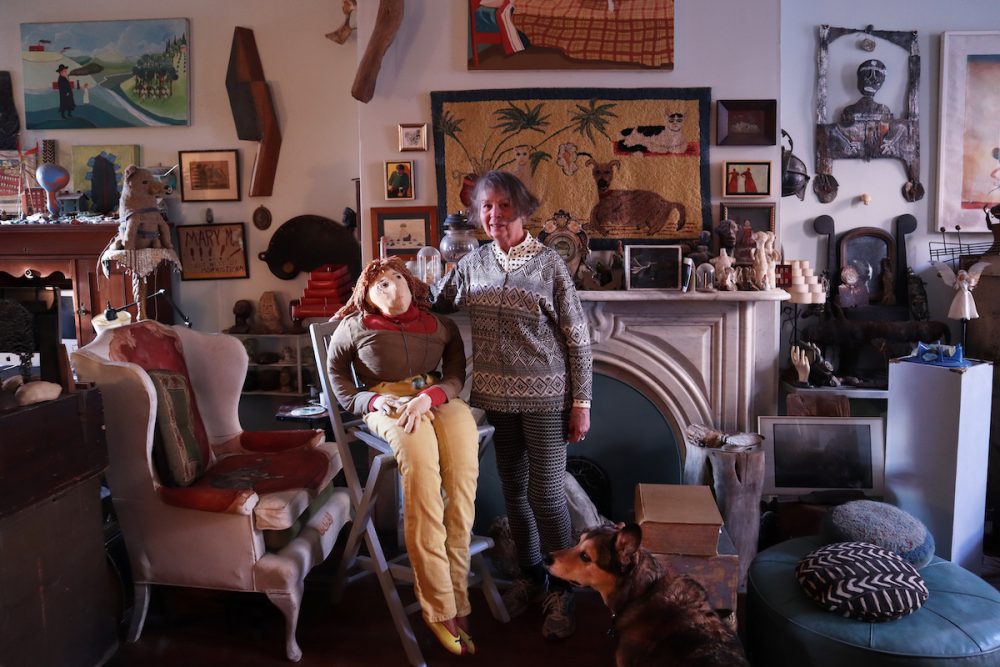 I mistook a handbag as a sculpture during my first visit to Linda Campbell Franklin’s home in Bolton Hill. Though the first floor of her home is filled with art, there are no defined boundaries that separate the art in her collection, the art she herself makes, her collections in progress, and the more ordinary articles of her life. There are a pair of framed artworks in the hall that succinctly exemplify this curious fusion: an illustration hung next to a painting, both depicting conjoined dog twins with two heads and no tail. Franklin’s home destabilizes the concept of “right side up” and asks the visitor to take a more unconventional approach to orientation.

Franklin is an artist who works in a variety of forms: painting, drawing, textiles, sculpture, writing, and— most notably—assemblage. She has lived and worked in her house for thirty years. At first glance, her surroundings might look like random clutter. Closer inspection reveals an intricate order. Collecting, cataloging, and categorizing seems to be in her blood. Both of her parents were librarians, and her brother publishes reference books. Franklin began collecting stones when she was four years old. Now collecting fallen leaves around the neighborhood, she recently celebrated her 81st birthday.

Natural objects fill the downstairs rooms: shells, stones, and bones; flowers, feathers, and bark. But human objects are also abundant: bottle caps, cogs, and clocks; jars, cups, and trays; wire, rope, and thread; coins and dice. As Franklin’s home blurs the lines between gallery, studio, home, and life, her collections ask the visitor to consider the natural alongside the man-made and assess similarities rather than differences. For example, both bone and cog are interior objects that facilitate movement; both thread and bark can be seen as woven, as materials that might form a sort of sleeve.

Franklin considers her array of interests as an artist a problem of focus, and she says the condition is “not a passing disease.” Of course, this “condition” is precisely what makes her work so captivating. Is a divided mind also most prone to do the work of unification? What was once a blue upholstered chair, Franklin has fashioned into a hybrid being—part chair, part crocheted dog—which she has knit as if the head of the bead-toothed beast burst forth from the chair back, its two blue paws emerging from and resting on the seat. Though the chair might not have a mind of its own, Franklin’s creativity is on full display, this chair just one object in her immense galaxy.

When considering her methodology of collecting, Franklin begins: “If I were a weaver… I love to find stuff.” The metaphor of collector as weaver comes easily to her. To weave is an act of imagination—or alchemy— to transform thread into something more cultivated, sophisticated, or complete. This is how Franklin views her impulse to collect: “I’m reintroducing things to each other, so they can be together for my pleasure.” 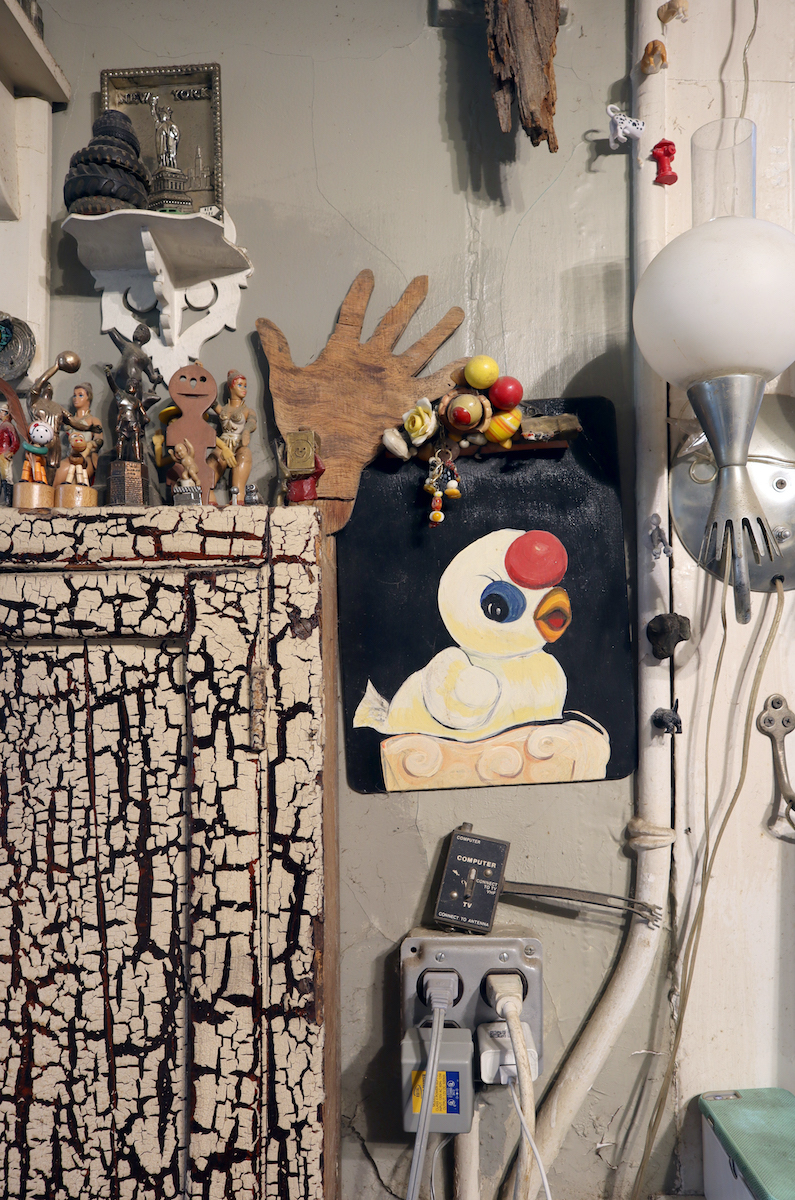 Reintroduce is an interesting verb for a collector to use, as it implies a previous relationship among objects before the collector discovers them. “Things are related across time and place because they can be called by the same name,” says Franklin. This idea is foundational to her practice, so a visitor might notice a shadowbox containing three music box ballerinas, or a shelving unit devoted to busts.

But this way of thinking is also how she comes to place a small metal drain sieve upside-down on a clay woman’s head as if it were a wide-brimmed hat made of straw. She’s created more assemblage pairings in this manner of pattern-and-shape recognition than I could count, more than a person could possibly take in during a single visit to her home. Speaking about the pairing of such objects, she says: “It’s like introducing two people who might become friends.”

Mickey Mouse is talking to the skull of an ape in a large print that hangs above the fireplace. The mantle below the print holds a large assortment of objects including a statue of the Virgin Mary whose head has been replaced with the chipped head of another Mickey Mouse. This mix-and-matching is key to Franklin’s work, sorting what belongs to what. She makes these pairings seem as simple as clicking magnets together—another interest of hers, as magnets are a more obvious example of objects with an inherent attraction. “I could relate everything on this mantel to the next thing,” she says. Franklin then points out the motif of Mickey’s large-eared head continued in the resonant shape of the wingnuts she’s arranged at the feet of the newly reimagined icon.

The scale of the work—the collection, arrangement, and creation—exceeds the scale of Franklin’s own life. The objects in her collection represent countless lives lived, and she can narrate the stories to prove it. The chair I sat on during our interview had been hand-painted by Franklin and depicts her late cat, Emmitt, curled on the seat cushion in the same place he used to rest when he was alive.

For a while, as we spoke, Franklin sat atop an old, giant Webster’s dictionary. She loves words as she loves objects—units that can be moved around and rearranged to inspire wonder. Though she eventually moved to a lower, more comfortable ottoman, I preferred the image of her on the classic reference book, propped up and supported by the massive index of language.

Words are also an integral part of Franklin’s visual galaxy. Tiny scraps of cut-out sentences are interspersed among the objects, not as gallery wall text, but as subtitles to hone or reframe the viewer’s attention. Below a yellow die and a tiny pair of metallic heels, “Waiting for another sentence, and I’m rummaging around my memory, almost like I’m talking to myself.” Below two angels, a beetle on its back, a tiny genie lamp, and a tinier fire hydrant, “This experiment should be made in a closet, where the air is very still, or it will be apt to fail.” 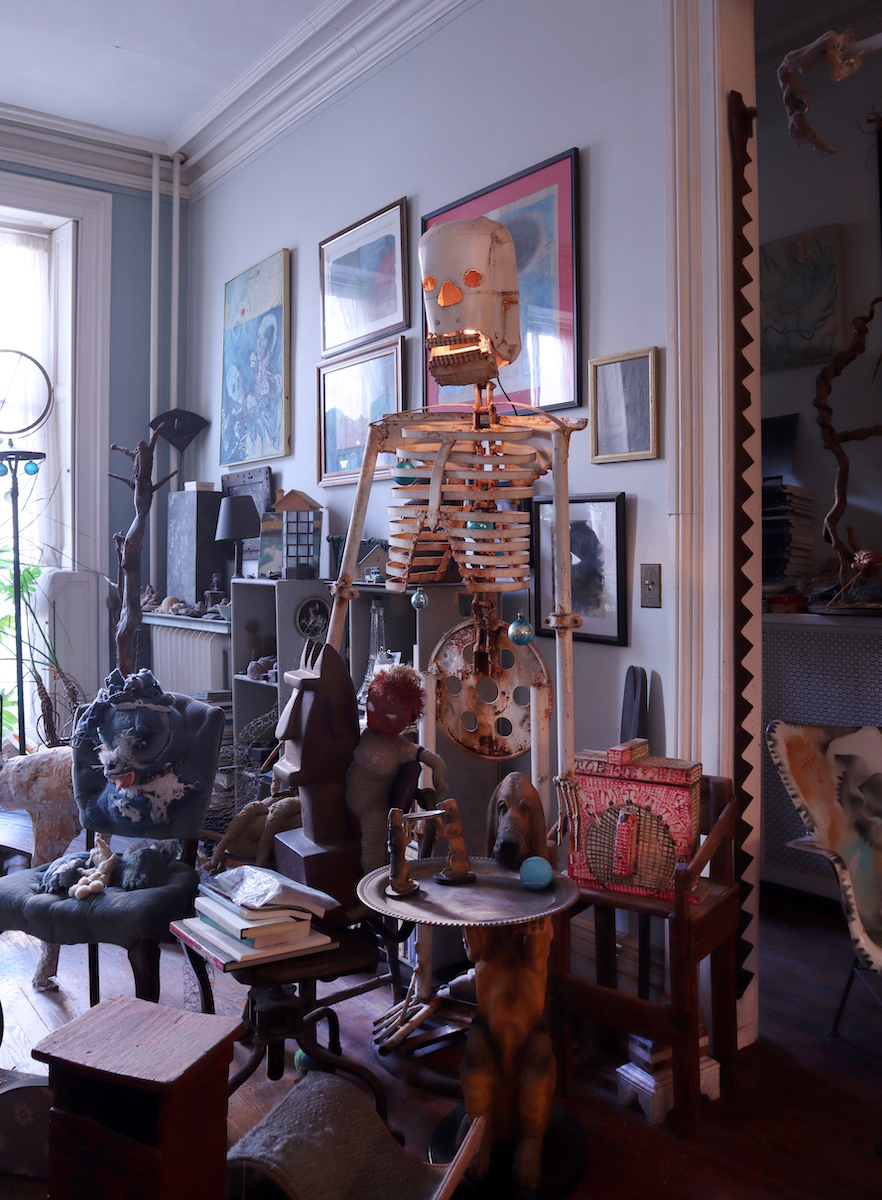 Franklin’s artworks are experiments of association. Like any series—or collection of artworks—some are more easily understood than others and therefore some may be perceived as more “successful.” But if the work is to have an impact outside of the artist’s world, it must be seen, which raises an interesting question: If the potency of Franklin’s work is in part derived from being set in the context of her home, what happens if it is temporarily removed and put in a gallery space?

This experiment will be conducted for the first time in May 2022, when Franklin will have her first-ever gallery show at 1448 Gallery, part of an artist collective located on Baltimore Street. She is in the process of choosing which pieces she will send, which pieces will attempt to stand on their own. I am sure the objects Franklin chooses will represent her well. I am also sure those objects will only hint at the greater work that has gone into the daily decisions of the artist, choices that have accrued over a lifetime of finding out what belongs to what. 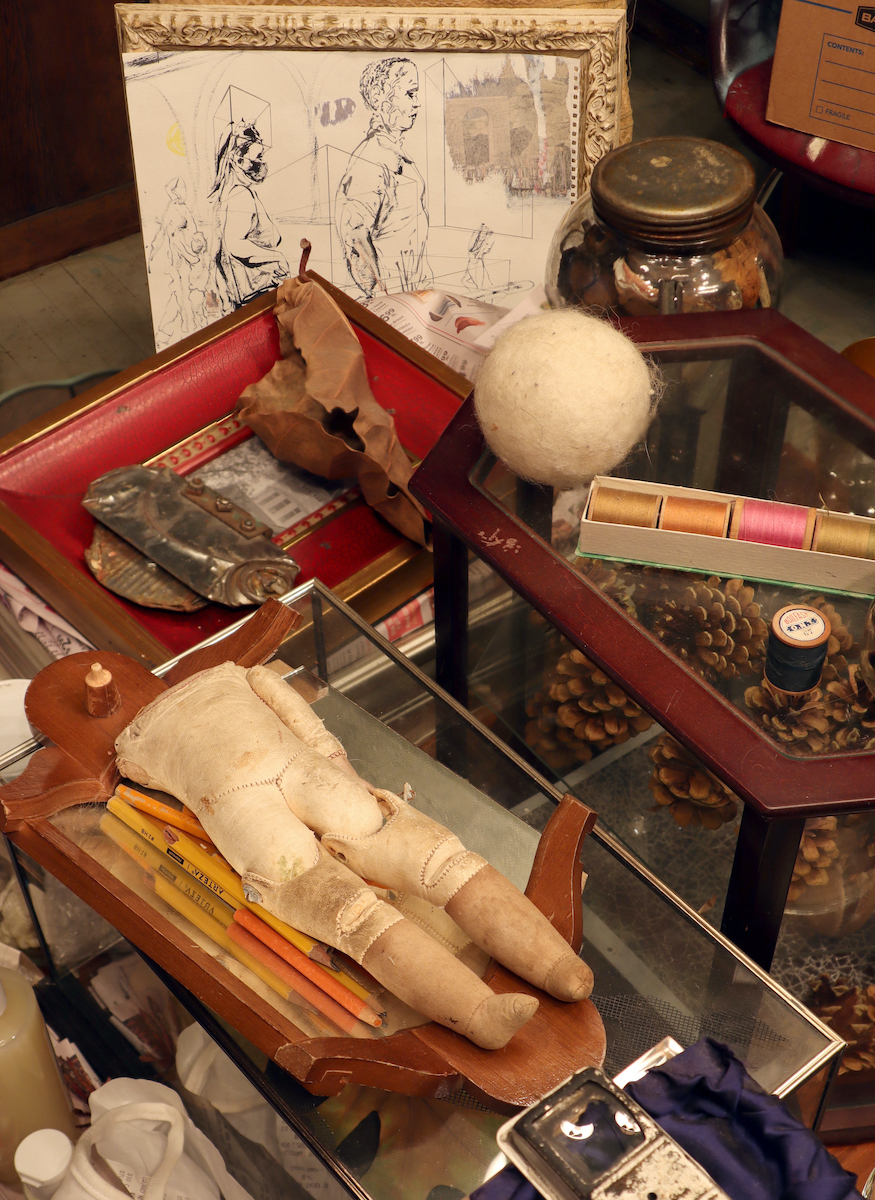 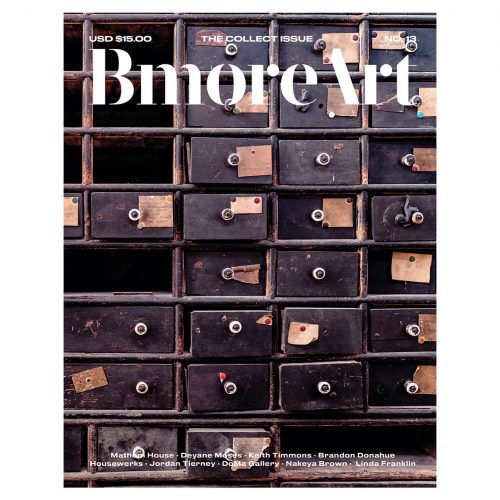