Howie Lee Weiss: Sophistication, Joy, and the Imperfection of Perfection 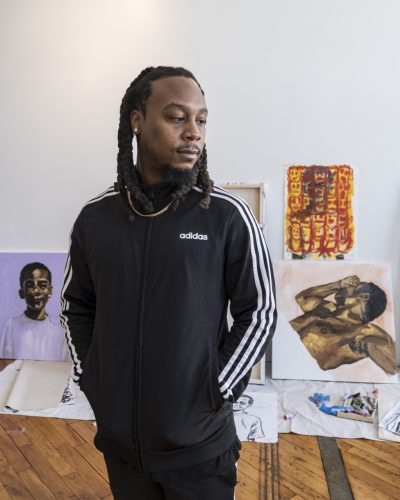 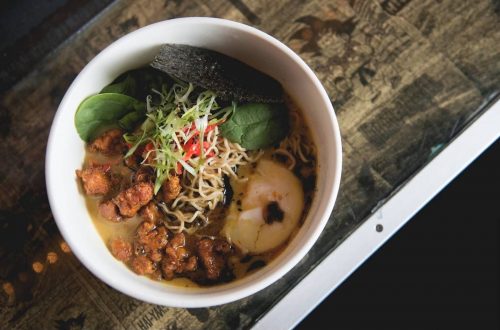 Visual Art
Howie Lee Weiss: Sophistication, Joy, and the Imperfection of Perfection
The Musical Specificity and Language of Grey in Weiss' "Centerpiece" at Gross McCleaf Gallery 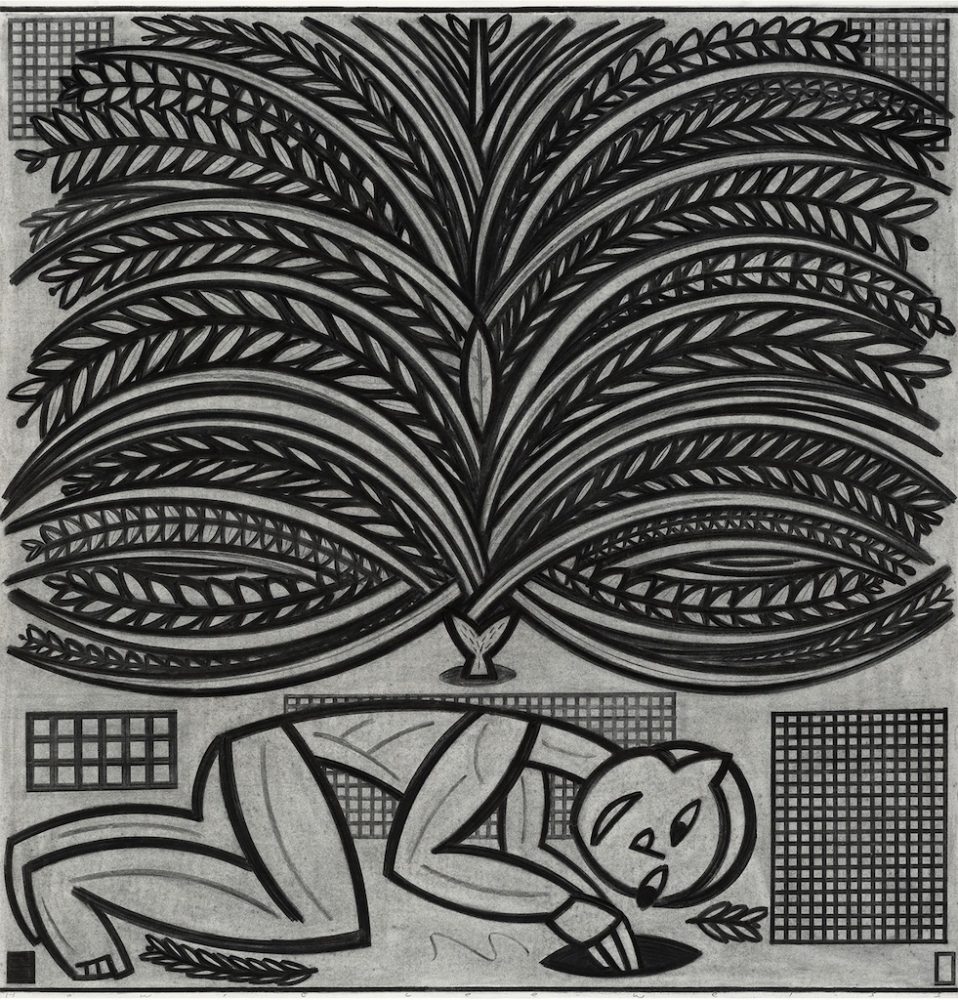 In our home, a child’s smile lives over the entrance door. It’s an early canvas painted by Howie Lee Weiss (HLW), unusual for him because most of his work is charcoal on paper. Also unusual is that, while it’s a powerful image, it’s not about the incredibly exacting “perfection” he is going for these days.

More often than not the work’s primary colors hang cockeyed in our living room. I straighten the picture periodically, but for over thirty years it’s been inclined to tilt. I could, of course, secure the painting with a second picture hanger, but I like both its innocent off-centeredness and its response to peoples’ comings and goings. Also, it mimics its image’s quirky quiddity and reflects who created this happy, abstracted portrait.

A singularly responsive individual, Howie’s a brilliant, kind, compassionate kind of guy. The best kind. Watching him critique students’ work at Maryland Institute College of Art, where he has taught full-time since 1979, he never fails to amaze with how carefully he looks and listens. So too, as an artist, HLW projects into his subjects’ lives deeply, whether those subjects are people, plants, objects, or animals. His revisited subjects matter.

“Though I may use it, I don’t think of myself as a ‘charcoal artist.’ I’m a painter using this medium.

Weiss has spent a lifetime collecting an ever-evolving cast of invented characters. He’s spent just as long perfecting his stylized portrayals of them and their subject matter. Examples are presently on display in a dazzling solo show, Centerpiece, at Philadelphia’s Gross McCleaf Gallery (November 2-December 23).

In “Sprout,” from his Centerpiece Series, we peek in on numerous past stars (the kind who got paid the big bucks for heading past casts): eyes, cups, grids… here, they play “supporting” roles. Like many of his compositions, “Sprout” is symmetrical. And not. The bottom, juicy part goes its own ordered, asymmetrical way, which is good; when visual systems break down, they’re usually more joyous and dynamic, like here.

Dynamically, he turns over and over again interrelated bananas and watermelons—actually, all his subjects—to bear more and more fruit. Often, his rhyming “characters” function differently within the very same drawing. In “Quest 2,” for example, the sprawling figure’s limbs echo the birds’ wings, crescent-shaped fruit, and leaves.

HLW works in series, exploring seemingly endless variations of certain motifs. Ironically, one signature subject is literally his signature, which he lightly elongates across the bottom edge of his more sustained works, like a slivered predella for an altarpiece. I’ve always been a sucker for pictures that combine image and text, especially when the letters function like a linear abstraction, again, like here.

Rebecca Segall, the owner/director of Gross McCleaf, grouped several independent, but closely related works, like the 12-paneled grid of small, square landscapes and a four-parter of vertical landscapes. The drawings are successful individually, but they’re even better together. Multiplication multiplies the rhythms. Previously, Weiss has displayed, up and down gallery walls, a gridded medley of 100 or more, one-inch apart, same-size panels. En masse, they read as energized, calligraphic, animations.

Morgan Hobbs, assistant gallery director, worked with Weiss to create a poster in which they gridded 25 of Weiss’ tree compositions from the show. Line and the trim, graphic quality of the artist’s language ties them together. What an exquisite announcement by two consummate designers. What an arboretum!

What first caught my eye—and ear—upon entering his opening, is the artist’s Centerpiece Series of singing, teeming trees and birds singing in trees. Here, birds, branches, and an occasional dog are perfectly ordered, with a special beat landing on the “perfect” part. Not a branch could be moved without the tree falling down. Unlike the piece over my entrance door, nothing so much as leans.

In “Contact,” “Flock,” “Flora,” “Song 1,” “Song 2,” and “Lullaby,” a choir of birds belt out boisterous, pitch-perfect party tunes. In many of these nuanced, iconic images the winged creatures aren’t sure if they’re perched inside within an artificial centerpiece or warbling outside in a real, fruiting tree. I suspect it doesn’t matter to the warblers, or in “Quest 2,” to the scribbled echoes and dreams of a turtle, tea kettle, cup, stars (the kind you wish upon), and a whole mess of acorns… or whatever they are.

Sometimes in digital images and websites the works may look purely black and white, but in person one feels the specificity and language of gray.

In “Song 1” and “Song 2” we’re squeezed into a steamrollered space in trees packed tightly with everything from birds to flower buds to lemons, or invented stand-in’s for them. Close quarters. Or maybe not so close. Or flat. No room to flap, but the feathered babies soar away—way back in the distance—and the adults can, too, when they want to.

This bold bouquet of an aviary includes hatchlings, fledglings, and adults all chirping the same imperfect birdsongs. Or not. Nothing is perfectly the same.

Contrary murmurs and bangs. Because Weiss’ charcoaled melodies are as varied as everything else about his richly textured work; because as a visual artist, he has a great ear; because he knows a lot about music, design, art, life, and the connections between them; that’s why his vision embraces so many deliciously perfect differences.

HLW enjoys changing scale. With dry humor, many of the gargantuan plants in his Centerpiece Series burst out of ridiculously tiny vases on even tinier placemats. And within the ambiguities of his largest narratives, he also dramatically shifts scale. These built compositions are his symphonies. The small works, his rehearsals.

Howie’s shadowy drawings sing, colorfully. “Though I may use it,” Weiss says, “I don’t think of myself as a ‘charcoal artist.’ I’m a painter using this medium.” In an interview reproduced on Gross McCleaf’s website, perhaps referring to life’s imperfections, the artist points out that “Sometimes in digital images the work looks colder, more machined, but in person they are clearly handmade, and one feels the gritty, worked quality.” I would add that all this working and reworking creates the luminous complexity of the grays he achieves. In the same interview with Elizabeth Johnson, Weiss explains that he doesn’t think of his drawings as without hue. “Sometimes in digital images and websites,” he states, “the works may look purely black and white, but in person one feels the specificity and language of gray.”

This leads us to the language of music, which plays a huge role in Howie’s life and art. Lisa Weiss, his wife, Professor Emeritus at Goucher College, is an internationally acclaimed concert pianist. A few months ago, I attended an outstanding, Baltimore-area recital she staged as a warm-up for her New York City performance at Carnegie Hall.

Her husband, who Lisa says, “hears very deeply,” doesn’t play any musical instruments, unless you count his masterly control of one-quarter-inch-thick, square sticks of vine charcoal, kneaded erasures, rulers, compasses, and reams of Lenox 100 paper. These days, charcoal’s an unusual medium of choice for such a sophisticated artist. Howie takes it to another level.

He also takes his colored felt tip marker sketchbooks (tons of ‘em!) to a simultaneously sublime and silly level. In them, he is a musician preparing, practicing, playing pictorial scales. In these books, Howie makes no distinction between disciplined work and disciplined play.

Keeping to the theme of music, HLW’s Gross McCleaf exhibition is a concert for the eyes. Listen to Howie’s “Song 1” and “Song 2.” Is it a stretch to equate his cartoonish, or better, “reductivist” calculations with the precision of a Bach fugue? Weiss’ humility could cause him to blushingly object to my comparing him to the great Baroque composer. But like that Master, there’s not a “wrong” note in a wise, super-sophisticated Weiss work. Everything’s exactly where and how it should be, goofily, down-to-earthly, imperfectly perfectly.

I imagine an after-breakfast table strewn with shadowless bananas, crescent-shaped melon slices, and a trio of three tea cups being sipped by Howie, Tchaikovsky, and Disney respectively. At a nearby table there’s J.S. Bach, sitting alone. Overhead there’s a primary-colored painting of joy and innocence.

I picture HLW walking shyly, respectfully towards the Baroque Master. “Excuse me, sir.” The older man puts down his teacup. “Okay if I straighten this canvas on the wall?” Howie asks. “It’s cockeyed.”

Bach nods yes. Howie nods back, as he adjusts the canvas to live a life of perfect balance. Or not.