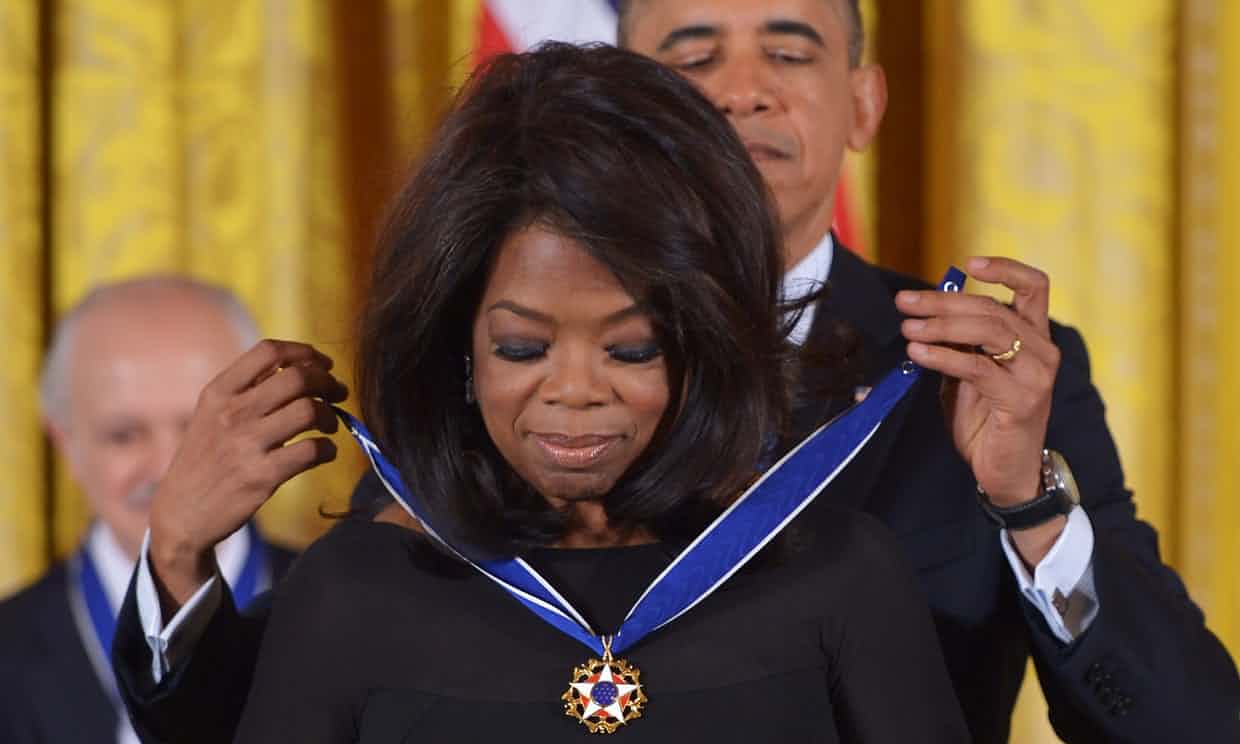 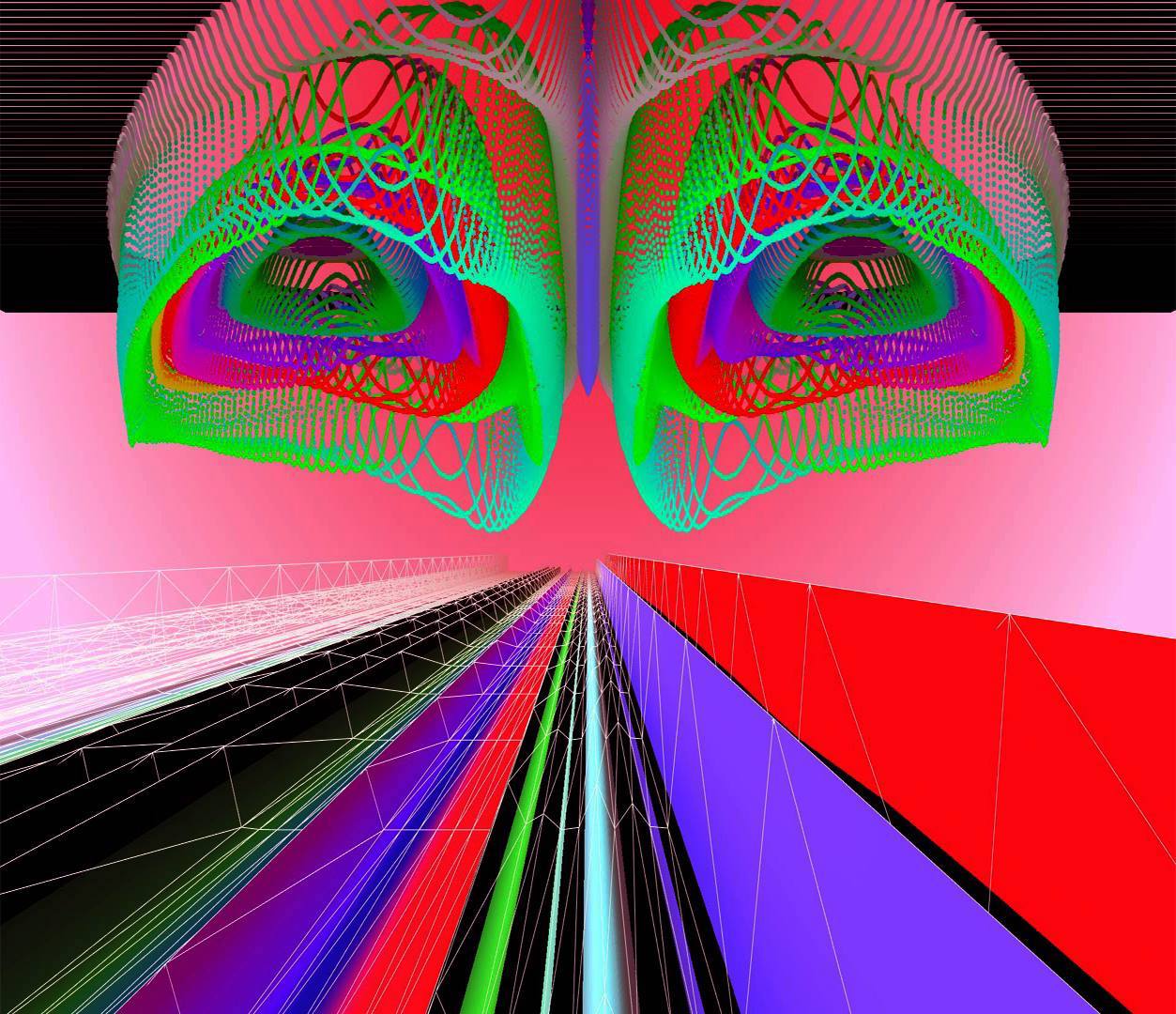 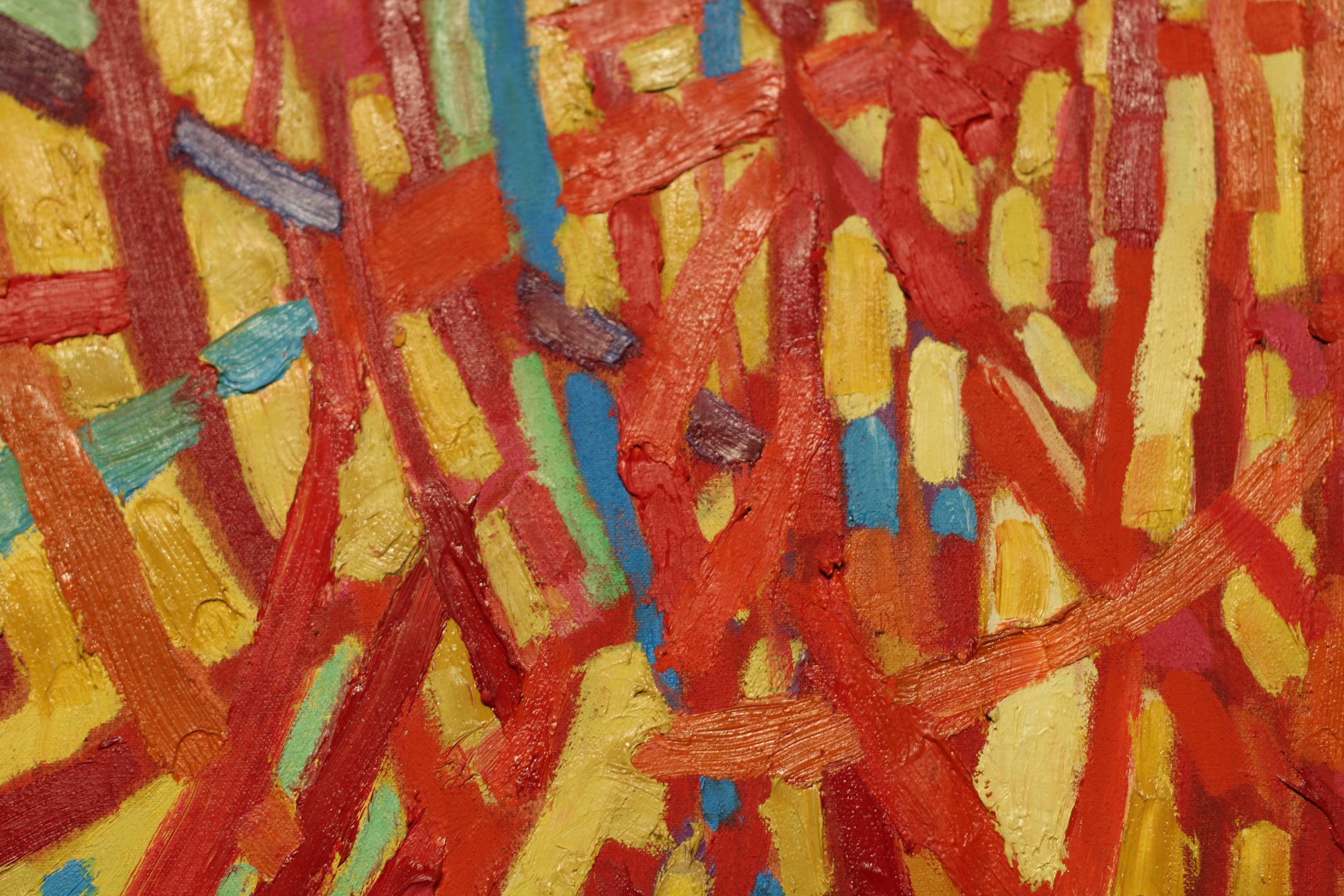 Expanding American Abstraction 1960s to Today at the National Museum of Women in the Arts by Angela N. Carroll

“Suppose the only Negro who survived some centuries hence was the Negro painted by white Americans in the novels and essays they have written. What would people in a hundred years say of black Americans?” – W.E.B. DuBois, from Criteria of Negro Art, 1926.

“By shedding the old chrysalis of the Negro problem we are achieving something like a spiritual emancipation.”  –Alain LeRoy Locke, from Enter the New Negro, 1925. 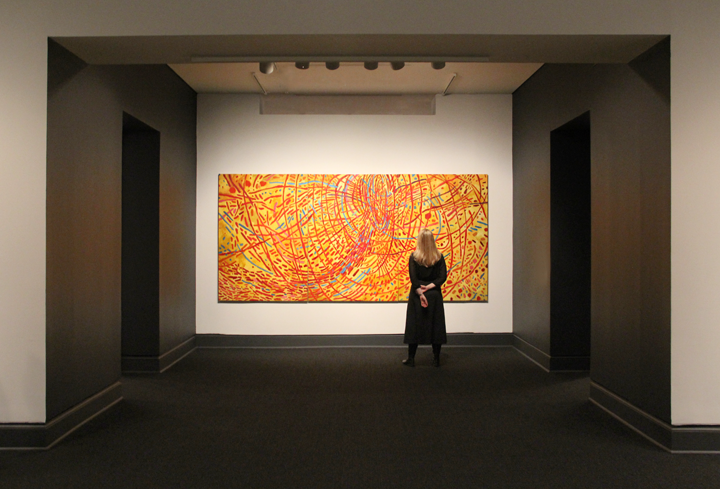 Viewing Magnetic Fields at the NMWA by Mildred Thompson feels like freedom. Bright streaks of red and blue orbit an unknown source, fracture into dashes, and dot a beaming yellow universe. The movement of the lines is both erratic and orchestrated, broad strokes that shift and resound like musical compositions, like the frenetic combustion and reformation from which galaxies are born, the booming screech and coo of ‘Trane’s horn, Alice’s transcendent harp solos, or FlyLo’s auric soundscapes.

Standing before Alma Woodsey Thomas’ Orion, 1973 made me feel like an astronomer surveying an undiscovered star system. Thomas employs a technique she developed called “Alma Stripes” to flood a large canvas with thousands of red strokes. By leaving a small space between each stroke, Thomas creates a hypnotic pattern that recalls West African textiles or astral landscapes. 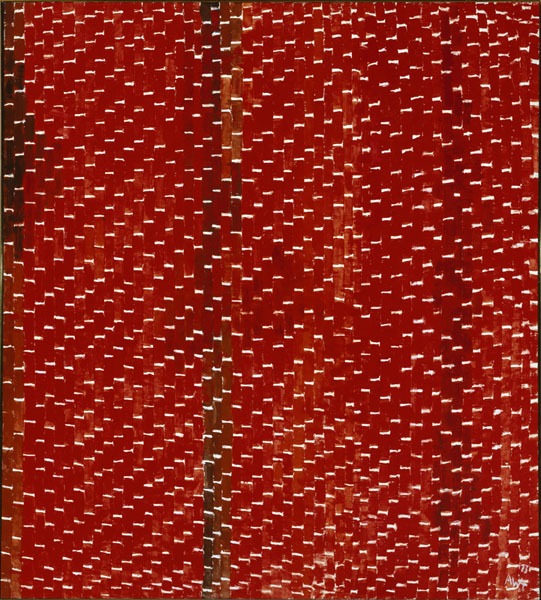 Both of these abstract works are familial and familiar, like a memory from the womb, or fragments of a dream you try to recall upon waking. The larger exhibition, named for Thompson’s magnificently expressive work, are inspired by earlier generations of abstract artists like Thomas, who fearlessly pursued and masterfully executed their visions: radiant and messy, ordered and unruly.

In Magnetic Fields: Expanding American Abstraction, 1960s to Today massive assemblage constructions, installations, paintings, and sculptures overtake the second floor of the National Museum of Women in the Arts in arresting abstract works. The show dramatically expands the cannon of abstraction in America and features black women as masters of the craft. 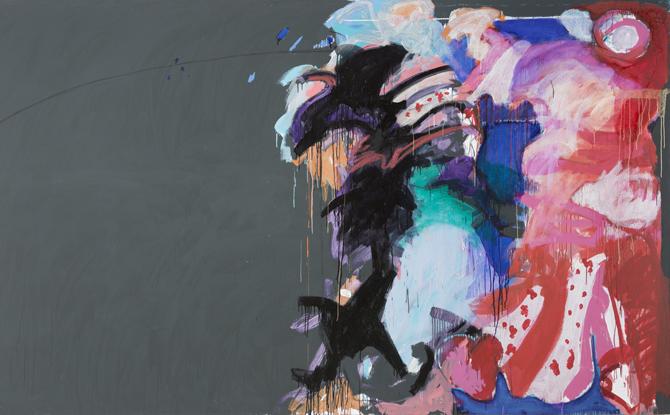 Mary Lovelave O’Neal – Racism is Like Rain, Either its Raining or it’s Gathering Somewhere, 1993

Contemporary art discourse overwhelmingly associates the canon of abstract expressionism with white men. We are familiar with Pollock, Rothko, de Kooning, among other notable experimenters who eloquently explored and redefined space, time, color and contrast. We are less informed about the contributions of women and people of color within the movement whose catalogs are inventive and brilliant.

The histories we learn about in our formative years are the ones that academics and invested institutions have deemed worthy of remembrance. Race, gender, and class, have played a significant role in determining whose stories are canonized and which are omitted from archival projects. Mary Lovelace O’Neal’s acrylic and mixed media work, Racism is Like Rain, Either it’s Raining or it’s Gathering Somewhere, 1993, is a witty and unsettling rumination that likens the conditions that foster and proliferate racism to precipitation. Like liquid that gathers in the atmosphere until gravity forces the heavy molecules to fall to earth as raindrops, racism aggregates in the cloudy group-think of the fearful. When the weight of collective ignorance gets too heavy to ignore, the group-think hive mind ruptures and enacts vile tortures and systemic oppressions onto the world.

In the same way that the waters of the world are eternally collected through condensation, stored, and rereleased across the globe, racism persists because it is sustained by new generations that recycle old forms of tyrannical supremacy collected in the watershed foundations of institutions, policies and ideologies. In Racism is Like Rain, the artist envisions racism as a monstrous amalgamation of bloated dripping forms that engulf the right side of a matte onyx rectangular canvas with sweeping strokes of white, blood red, purples, blacks and blues. The palette reminds you of bruises, old blood that ripples to the surface of engorged flesh or a mutated version of the American flag. Brutality, violent oppression, and the horrific imagined other all come to mind, O’Neal creates a landscape that is balanced and by the stark polarization it bears. 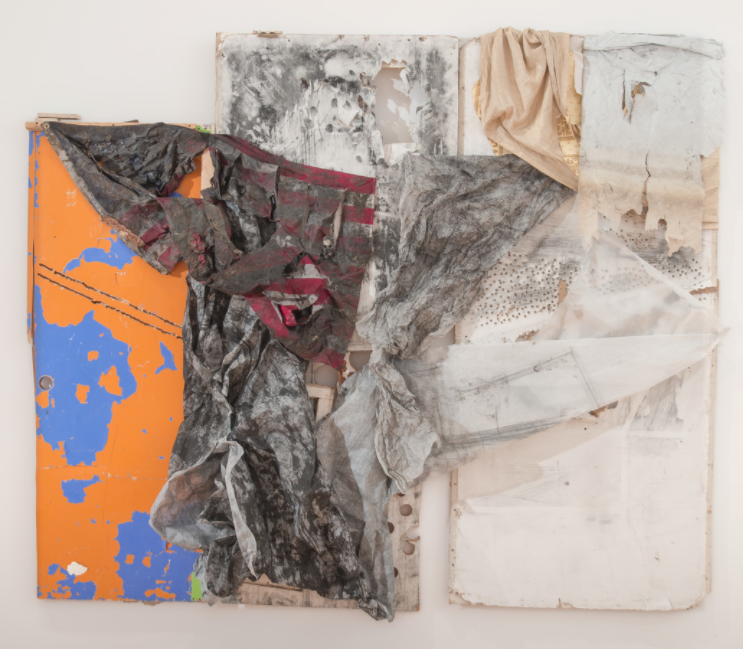 Abigail Deville’s, Harlem Flag, 2014, is similarly critical of systems, symbols, and geography. Deville uses fragments of discarded scraps, a mutilated American flag, sheetrock, wallpaper and other found materials from Harlem New York, to sculpt an intricate triptych assemblage. Each found object holds a distinct texture, a story that is not explicitly revealed but alludes to more nuanced themes. The juxtaposition and re-assembly of the objects, prompts viewers to draw their own conclusions about the narratives Deville elicits. I thought about the gentrification of Harlem, unequal civil liberties, housing disparities, and dilapidated hopes. 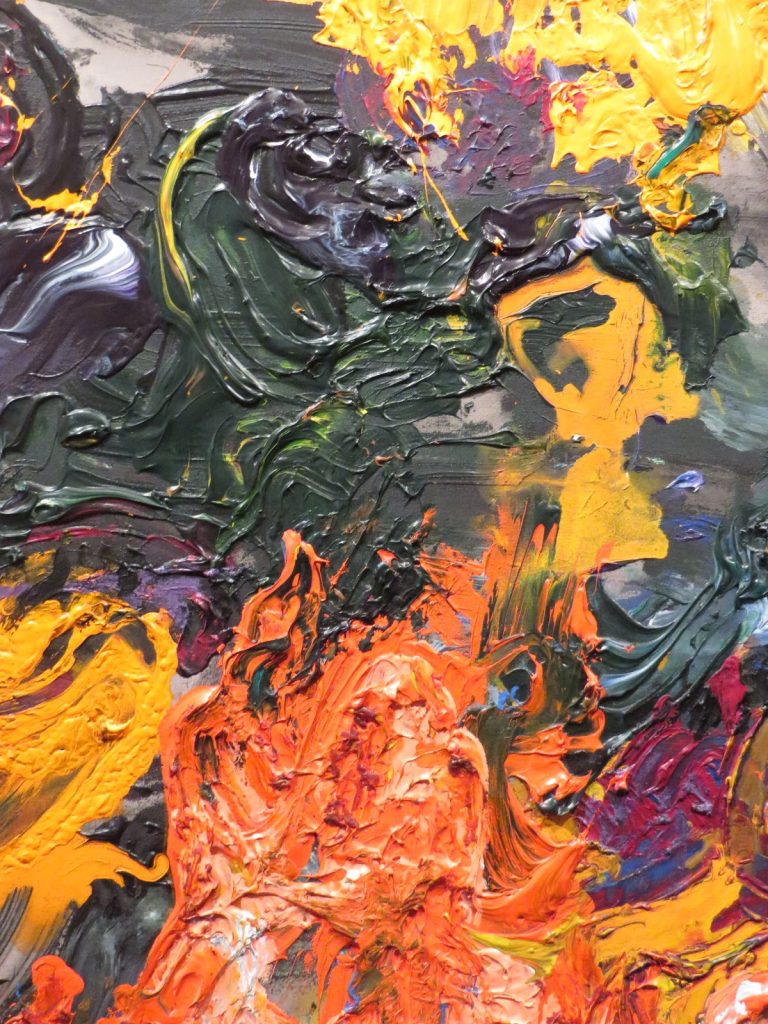 In contrast, Sylvia Snowden’s acrylic painting, June 12, 1992, presents a richly textured celebratory portrait that honors legacy and the anniversary of her parents’ wedding. Dense layers of gold and yellow, blue and red overwhelm the canvas with color. Darker tones and white highlights peek through and make the otherwise psychedelic scene more grounded and harmonious to the viewing eye. She captures beautiful discord in an abstract time capsule that embodies black joy. 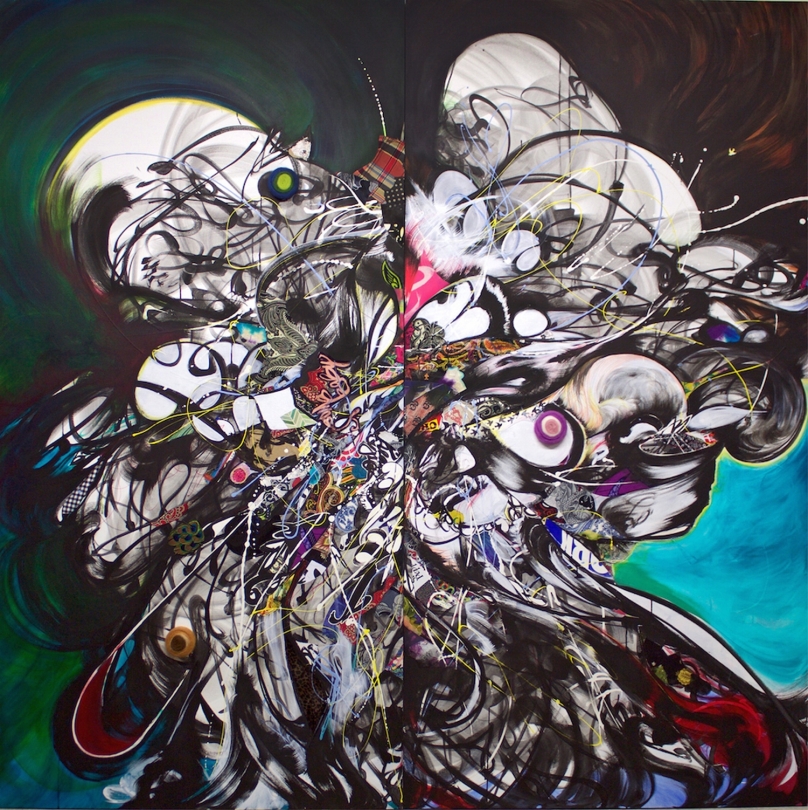 Shinique Smith’s mixed-media and collage work, Whirlwind Dancer, 2013-17 is stunning. Full bodied strokes swoop, billow, and bend like hummingbird wings in flight, fluttering so fast all that remain are shadow trails and buzzing. Smith centers the residual imprint left by the dance of an unidentifiable elemental and imagines a whirlwind, Yansa, the epitome of change, and explores how the mass evolves its movement and shifts form in the space it consumes. Alchemic and overwhelmingly beautiful, Whirlwind Dancer immortalizes a fragment in time.

The freedom to express oneself beyond specific and stringent racialized categorization, to complicate visual representations through abstraction instead of figuration, remains a taboo and highly contested endeavor for Black contemporary artists. It is a brave thing to revel in the uncertainty of abstraction, or risk obscurity within an already hyper marginalized and segregated art market.

Each of the women exhibited in Magnetic Fields has remained dedicated to their individual voices and chosen mode of expression, even while the world mostly refused to acknowledge the relevance of those visions.

Magnetic Fields is on view through January 21, 2018 at the National Museum of Women in the Arts in Washington, DC.