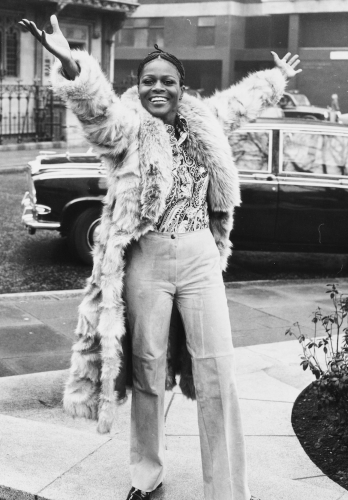 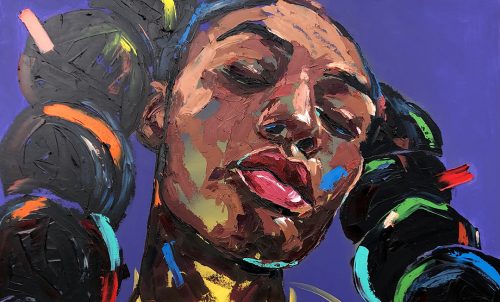 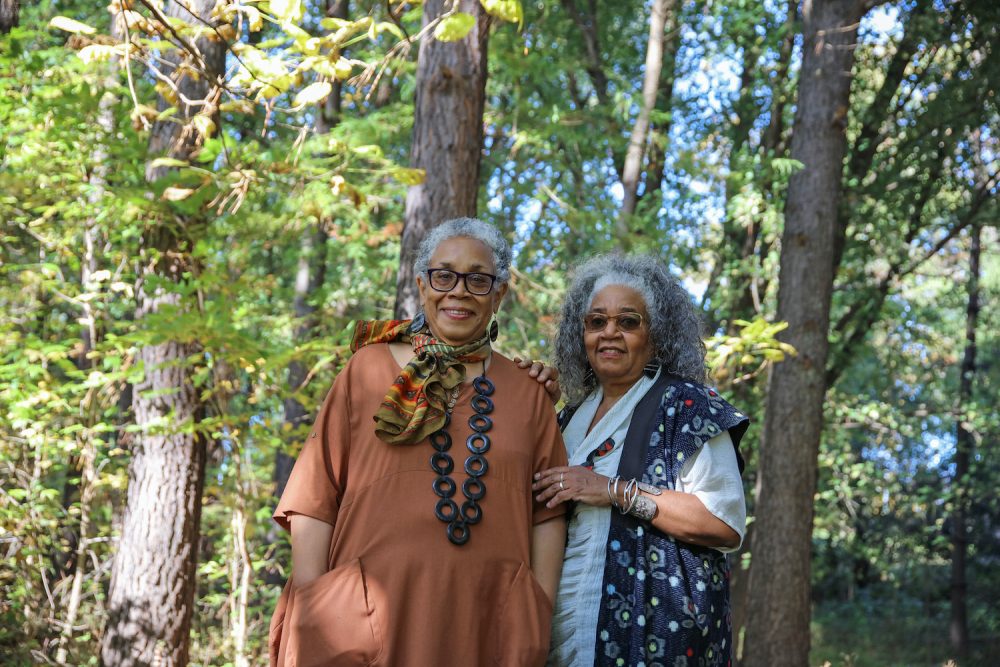 It is a brave pursuit to challenge the limits of indoctrination. It is a rebellious act to confront the subjective paradox of history even as it claims to be neutral. Scholars, writers, artists, and curators are mark makers; their queries leave indelible imprints in the matrix that constitutes the art historical canon. Little by little, methodically, strategically, they chip away at the intractable constructs that define what history is and whose accomplishments should be venerated as archives preserved for future generations.

For almost fifty years, the scholarship and curatorial endeavors of Leslie King Hammond and Lowery Stokes Sims have challenged significant cultural institutions to reorient history as a broad landscape that situates white accomplishment as a component of, but not a singular contributor to, art history. Collectively and separately, these two women have built a legacy of excellence and diversity at museums and colleges including the Metropolitan Museum of Art, where Sims was employed for 27 years, the Maryland Institute College of Art, where King Hammond was Graduate Dean and the founding director of the Center for Race and Culture, as well as the Studio Museum of Harlem, the Museum of Arts and Design, the National Gallery of Jamaica, the Reginald F. Lewis Museum, Queens College, the Cleveland Art Museum, and others.

Their sisterhood started in the 1960s as ambitious, bright-eyed Girl Scouts with dreams as tall as the skyscrapers that surrounded them. Growing up in New York City, both had aspirations to become archaeologists that were seen as too far outside the constructs of caste because the so-called liberal North still upheld many of the subtle (and not so subtle) codes of the Jim Crow South.

To be young, gifted, and Black required grit and an unshakable belief that others’ perceptions about the presumed affliction of being born both Black and female could not thwart their drive to be successful, on their terms, and by any means necessary. Their parents were concerned by their desire to engage in such lofty pursuits.

“My mother put the kibosh on that,” Sims recalls. “She said, ‘You know, you really need to be white and rich to be an archaeologist.’” King Hammond concurs. “My parents thought my career aspirations were truly weird, and they were also scared that I would die in a dusty pit somewhere.”

It is essential to consider the context of the working conditions that both King Hammond and Sims experienced as Black women working within cultural institutions in the 1970s, 1980s, and 1990s.

Those who have experienced the worst kinds of systemic violence and the absurd vitriol of caste are cautious of the danger it presents, and weary of the sacrifices required of those who are the first. The first woman. The first person of color. The first queer. How many firsts are remembered as martyrs? How many firsts were buried before the magnitude of their sacrifice could be documented? It is not surprising that their parents would fear the worst before they hoped for the best. America has not honored its declarations: Countless firsts have drowned in the murky depths of history.

Determined to do the work of unearthing all the deep blue-Black brilliance that erupts at the periphery of our global consciousness and consideration, and in defiance of fear, they both pursued studies in art and art history, first as undergraduates at Queens College, then as graduate students of art history at Johns Hopkins University. King Hammond earned her PhD at Hopkins and stayed in Baltimore, while Sims completed her doctorate at the Graduate School of the City University of New York, but the two stayed in close contact, a relationship which continues to this day, especially now that Sims has relocated to Baltimore.

It is essential to consider the context of the working conditions that both King Hammond and Sims experienced as Black women working within cultural institutions in the 1970s, 1980s, and 1990s. Although Alain Locke’s transformative anthology, The New Negro: An Interpretation, and Langston Hughes’ The Negro Artists and the Racial Mountain were published in 1920s, the critical discourse about the cultural and intellectual contributions of African descendants in America was still not recognized by cultural and educational institutions.

It was still widely accepted that Black Americans had no history and were civilized through colonization. Fighting against this schism is still a Sisyphean pursuit; from D.W. Griffith’s blatantly ahistorical 1915 film Birth of a Nation to the recent executive order issued by the Trump administration to create a more “patriotic curriculum” in 2020, the struggle to maintain an earnest and inclusive American history remains a steep ascent.

Black American liberation struggles of the 1950s and 1960s echoed global calls to action. As African, Indigenous, Asian, and Latinx diasporas armed themselves with the knowledge that their lives and histories mattered, their collective actions, scholarship, and institutional administrative roles expanded to exorcise the racism that stagnates all disciplines. Works authored by Black scholars like Dr. James A. Porter and Dr. David C. Driskell inspired young Black scholars to found the field of Black Art History, and King Hammond and Sims were among those who heard the call, engaging the study and inquiry of Black lives and accomplishments with an unfaltering commitment to fortify the field.

“I always said that I had a mission, and my mission was to make sure that artists of color and overlooked white artists were represented in the museum’s collection,” says Sims. “We stood on the shoulders of David Driskell even if we didn’t know it at the time. We knew that when we got into certain arenas and had the opportunities, we knew we could not afford to eff it up. We had to fulfill that mission and keep it going and also to drag people with us.”

The act of excavating, revising, and regenerating art historical canons is a reparational demand, an agitation of the structure, a reimagining of the standard. King Hammond and Sims have engaged the archive like doulas might engage a breached birth, like an explorer might approach an uninhabitable land. Strategically. Inquisitively. With precision and care. “What we started out doing was understanding the blind spots in our history within the genre of the disciplines that we love in the arts,” King Hammond says. “We did a lot of mining and excavating. We went through corners of visual culture, testing and challenging notions of aesthetics.” In retrospect, Sims says that she believes the two never really left their original goals of being archaeologists, but realized the study in previously unimagined ways.

Sims and King Hammond continued to work within cultural institutions and forged their own pathways even when they received great pushback. “Working at the Metropolitan Museum of Art, the most prominent museum in the country, you become very conscious of all the hierarchies and class issues within the museum as a whole, never mind the fact of being a Black woman,” Sims says.

We stood on the shoulders of David Driskell even if we didn't know it at the time.

Sims went on to serve as the Executive Director of the Studio Museum in Harlem from 2000 to 2007, and retired as the Curator Emerita from the Museum of Arts and Design in 2015, among other positions of authority and esteem, honorary degrees, and authorship. At MICA, King Hammond was a professor and dean, and also the project director for the Ford/Phillip Morris Fellowship Program for artists of color at MICA, which included the Yale School of Art, School of the Art Institute of Chicago, Cranbrook Academy of Art, and California Institute of the Arts. In 2008, King Hammond retired as Professor Emerita and became the Founding Director of MICA’s Center for Race and Culture, as well as serving as Chair of the Board of Directors at the Reginald F. Lewis Museum, and continuing to receive numerous fellowships and honors, including serving as Senior Fellow at the Robert W. Deutsch Foundation.

Awe is an appropriate description for the staggeringly prolific accomplishments of these two warriors, women who understood the enduring intersections between forefronting Black aesthetics and fighting for systemic change. There is no separation between those efforts. Founding the field also required fostering new structures and equitable initiatives. The actions of King Hammond and Sims, best friends since childhood and partners in professionalism, stand in the gaps so that the next generation can stride toward their goals with more ease than their predecessors were afforded.

At its core, this bridging, this way-making, tethered to Black memory and accomplishment, is an act of love, a deep and unabashed care for the humanity of Black people. King Hammond and Sims have created spaces for us to see ourselves as we truly are: whole and brilliant. Their solidarity is a mirror of our collective possibility. It is through their example that future generations and students of their scholarship and sharp, uncompromising critique can feel more affirmed in our purpose and stand assured about the power of our work.

“Now is the time and this is a powerful history that we are living,” King Hammond declares. “We are in a radical moment, the catharsis of our lifetime. The culmination of 400 years of this history, finally like a volcano erupting, like an earthquake, a tsunami that has come in. The question is, what happens in the aftermath of these crises? There is a tremendous load of work that must be done and we have to own it. The arts are one of the ways in which people are reaching out to seek means to redress, to heal, to reimagine who and what we are.”

Photos by Phylicia Ghee were created in October, 2020 at Druid Hill Park for BmoreArt Issue 10