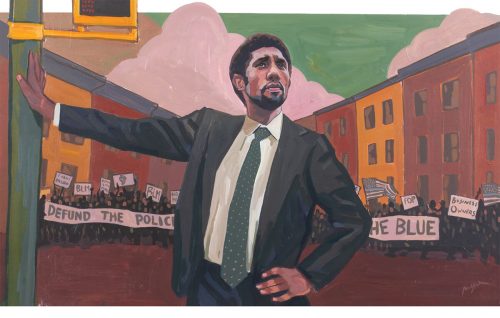 Visual Art
A Photographer Reimagining the Practice of Portraiture
Rebecca Marimutu is a contemporary photographer and interdisciplinary artist whose work explores the self, identity, and materiality 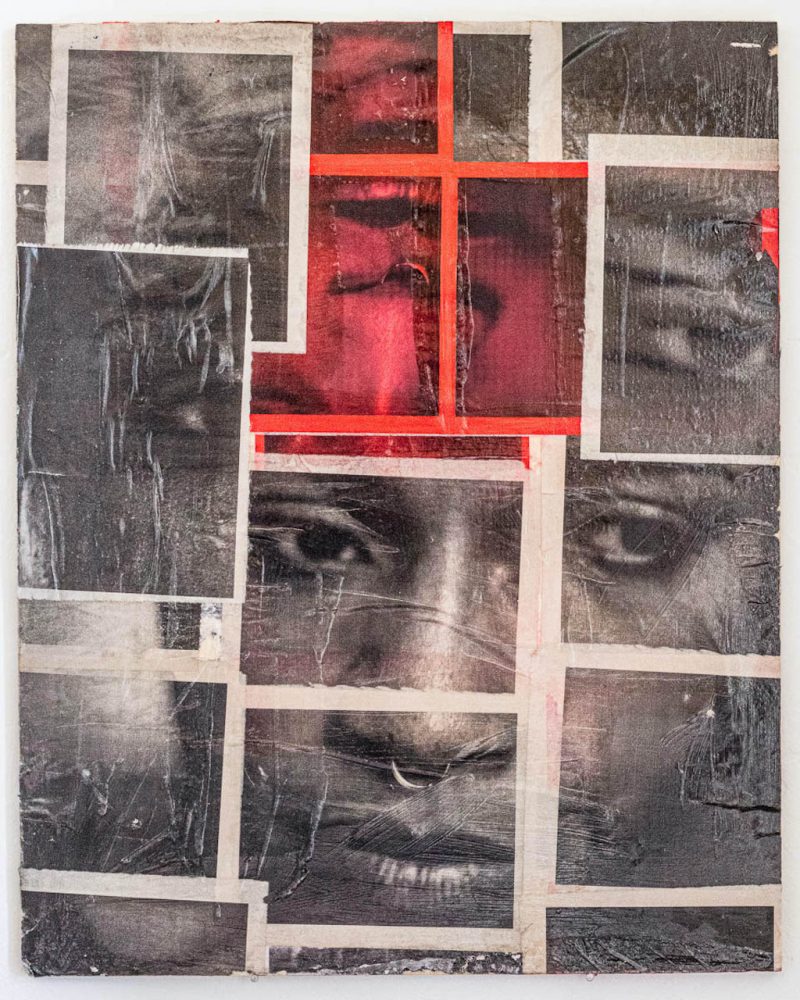 Born in New York City, with Indo-Guyanese and African-American roots, Rebecca Marimutu is a contemporary photographer and interdisciplinary artist whose work explores the self, identity, and materiality, through various mediums such as photography, collage, paper sculpture, and abstraction. Marimutu, a 2020 MFA graduate from MICA’s Photographic and Electronic Media Program, is based in Baltimore. She teaches at Towson University.

I first encountered Marimutu’s artwork at Eubie Blake as a part of Repercussions: Redefining the Black Aesthetic, where she exhibited a set of two photo collages, “Portraits, Adhered” #11 and #10, 2021, which initially appeared to me as an abstract network of black, white, gray, and anchoring red tones. However, after I spent more time with them, I was able to excavate images of human fragments from the composition and realized they were collages of abstractly represented identity.

Marimutu says that her work is informed by research into critical race theory, as well as contemporary discussions around the dimensionality of the photograph, and she works by concealing, obscuring, and protecting that which lies within the frame. At the start of 2021, during a period of isolation, she started her Portraits Adhered series, using digital photography and “disrupting the material hierarchies in contemporary image and media consumption” by mounting them onto wooden boards with wheat paste, PCA glue, clear acrylic gesso, and staples. Not only does the series offer opportunities for self-examination, but it allows the artist to “expand on the sculptural potentials in photography.”

Marimutu is inspired by Lorna Simpson as well as subway advertising, and is self-referential in the most direct way so that much of the artist herself is embedded within her works. Both analog and digital, Marimutu’s photo collages reveal a process of self-discovery and self-representation through actively manipulating and reconfiguring material into sculptural figures.

Where are your roots? Where are you from?
I am a native New Yorker. I grew up on the west side of Greenwich Village, in a development called the West Village Houses (WVH). WVH is a series of buildings designed by activist Jane Jacobs to promote neighborhoods with a sense of community and to preserve the creative character of the village. I grew up with my mother who is a Caribbean immigrant. Her family is most likely of Tamil origin, and are part of the Indian Diaspora that traveled from India to Guyana during the era of British colonization, and after a few generations from Guyana to America in the ’70s. My father is African-American with roots in Harlem.

When did you start taking photographs?
When I was younger my father would visit me and he would let me use his camera—so my earliest pictures were [taken at] age six or seven. One time we worked on my first collage attempt, taking pictures of different body parts, disembodied arms and feet. I wanted to cut them up and put them all together as a miniature version of myself but it didn’t work out as planned.

I was ten when my mother got me my first camera from a local Radio Shack on 6th Avenue. It was a small red digital camera with no view screen, so I would have to upload them to the computer to view my images. I had some other point-and-shoots after that, but for my fourteenth birthday I convinced my father to get me my first DSLR. At that time, all the images I took were yellow since I didn’t know anything about white balancing.

I really started to take photos that I was proud of in undergrad. I felt driven to take film photography seriously and worked in the darkroom a lot. Much of my work at this time revolved around learning the technical skills that underpin my current work.

How do you describe your artistic process?
During COVID, like many of us, I started to be around myself more, and as a photographer I didn’t have the ability to photograph other people. As a result, I started really being present with myself and using my own image in my work. As I was confronted by myself I started to more fully develop questions around my identity, my body, and how photography can explore intersections of representation and abstraction.

My previous work took a less direct route than my current projects. So I could say that my artistic process is self-reflective and improvisational. I like to work in real time through things that are going on in my personal life and use it as a basis for my projects. Emotions, trials and tribulations are things I want to convey in my work.

Are your collages analog or digital?
Both. My collages are a combination between analog and digital. I primarily shoot digitally but often my images are analog in the sense that I print them out, manipulate the paper, and finalize them as physical, tangible objects.

Who are some of your collage influences?
I am a fan of Lorna Simpson’s collage work because it allows the viewer to interact with Black female portraits in a new way. Her work uses Black female portraits from magazines and publications, and she cuts them out, layering them with other elements like watercolor or clippings from other magazines.

My collage work is also inspired by viewing aging subway advertisements. I observed, when they get ripped down, you get to see layered moments of time. At one time an advertisement took up a whole space, and over time, only takes up a smaller fragmented piece of space.

I am a lover of black and white photography. I am inspired by Jungjin Lee and André Kertész. With Jungjin Lee’s work, her approach makes the entire process naked to the viewer. I wanted that kind of transparency of process within my work. Her process uses a material called liquid light, which allows for the texture of brush strokes and paper to appear in her work. I’ve always been drawn to it because of the process involved, and aspire to make work that also calls into conversation the process through which it was made. Kertész took a lot of pictures with the female body, and while there could be criticism of his work, it made me think about the space that I take up and how I use that space as a creator.

What camera do you shoot with primarily?
Canon Eos 5DSR is my primary camera.

In the series of works you submitted, I see you primarily use a palette of reds, greys, blacks, and whites. Why do you use these colors specifically?
I want to blur the lines between digital and analog. I am so inspired by the darkroom process and the hands-on experience of using analog materials but I do not have access to them now. My darkroom experience has been mainly black and white, so I want to emulate some of what I am drawn to: I use tones of grey and black, and the tones that come from the printer that I use.

I am drawn to the color red due to its association with caution. As I focus on taking self-portraits I want the viewer to feel the same vulnerability as I do when I take and display my work. I think that the red of the paper really cuts through the layers of grey and black as something to be paid attention to.

What is your favorite piece of photo equipment these days?
I would say the sunlight in my studio. I get some good sun between 10 a.m.-4 p.m. and I try to maximize my access to it.

Film or digital (or both)?
Currently, I am primarily digital. I do have a soft spot for film because it was what I used from 2012-2016. I think the conversation about which of the two to use, and why, is fascinating, and am enjoying the resurgence in people using film.

What is your favorite place in Baltimore to shoot, visit, or experience?
I shoot primarily in my studio, but when I am done working I love to meet some friends at Fadensonnen. I also enjoy walking in Wyman Park to clear my head or going rock climbing at Earth Treks.

What are some of your favorite subjects to shoot?
Currently, I am focused on self-portraiture. Because I photograph myself, there is more of an opportunity to self-reflect, to experiment and play with what our expectations are as a viewer of photography. I don’t feel as comfortable ripping up and damaging images of people who are not me.

What does your collaging process entail?
I tend to make my collages during the day and typically make them in the studio. I like to do everything myself so after shooting my portraits, I then import them onto my computer and do some light editing so that they will print accurately on my printer in the studio. I then print selected photos onto multiple sheets of 8.5 x 11 paper. After that I decide which layers and images I want in the foreground and the background, or if I want to do a large multi-layered portrait, or something else. I work on wood boards to help add some structure to the pieces and glue and tape photographs to it.

How does your photography process inform your collage practice? Do you only collage with your own images?
My photography process informs my collage practice because I only use images of me and what surrounds me for my collages. I do this because I want to have complete authorship of my work and my image. It is important to me that all my work in this series is self-reflective.

What is your philosophy around abstraction?
I am interested in abstraction as a means of protest, insofar as it breaks through ways we are often allowed to see ourselves in contemporary art. The forms through which we are allowed to view images of our Black selves are often determined by voices, opinions, and structures that do not look like us. My intention is to use abstraction to both deconstruct and obscure the image of the self—the image of us and the pressure to be represented.